"We wasn't nowhere ... but slugging through some black dream that didn't have no end"

Like many veterans, Gramps did not share the horrific carnage he must have witnessed and endured with his four grandsons. We know he lost close friends, some in the every first minutes when they were ordered to go "over the top".  We known from historical records and eye-witness accounts that his regiment, the 91st Regiment was the recipient of three different gas attacks by the Germans while crossing no-mans land during the Meuse-Argonne offensive.  We also know, that in their very first engagement his regiment had pushed the German line so far back, that they ended being surrounded on three sides.
However,  he did share some anecdotal stories.
On a certain day, each and every year until he died, Gramps would have Mabelle fix a dinner plate of canned corn beef and hash, all the while hating the taste of it. Because lest he forget, on that very same day during WWI, after a day of intense fighting, he sat down to eat his only can of ration, only to find a bullet hole in his backpack and a bullet lodged in the middle of a can of his corn beef and hash rations, thereby saving his life.

"A great shrieking noise came, then a dull explosion. Someone yelled, Gas! Gas!"

Belgium Operations in Ypres-Lys Offensive (Oct. 31st - Nov. 11th) (7 days on the front)
- total casualties 934
The Ypres-Lys Offensive of World War I, part of the larger Hundred Days Campaign, was launched in August 1918  to liberate Belgium and parts of northeast France. The offensive involved Australian, Belgian, British, Canadian, French and American forces, and inflicted heavy casualties on the Germans opposing it. This forced a German retreat, and furthered the attrition that brought the war to an end.

Four American divisions fought alongside their Allied counterparts in the Ypres-Lys Offensive, providing critical reinforcements to war-weary armies that  had been fighting for four long years. The offensive featured recurrent major assaults as the Allies brought forward supplies and reinforcements to renew the attack. Shortly after the offensive began, the Germans sought  to withdraw from exposed forward positions back to the formidable defenses of the so-called Hindenburg Line. The Germans  delayed or stalled Allied advances using intense machinegun fire, gas attacks, booby traps, snipers, and artillery.  The Allies returned to the attack, time and again, to hammer the sagging German defenses. The Germans were forced back to the Lys River, and then to the Schedlt River, in less than three months. The Germans committed to an Armistice  effective at 11:00 a.m. on November 11, 1918. The Allies had been preparing for another offensive thrust set to begin that very day.
The Great War - Part One
The Great War - Part Two
Tragedy at Gesnes
Ypres-Lys Offensive
On April 27th 1919, Walter P Campbell is honorably discharged and the army pays for his trip back home to Fairfield, Calif. the place of his enlistment. Shortly thereafter, then travels from Fairfield, Calif. to Tacoma Washington to ask Mabelle Watson for her hand in marriage.  On June 7th 1919, 23 year old, Wallace Patrick Campbell marries 19 year old Mabelle W, Watson in Tacoma, Pierce County, Washington.  The newly weds return to Vallejo CA, and Wallace joins his brothers Jerome, John and Charley working at Mare Island Naval Shipyard as ship fitters and boilermakers until the day they retire. 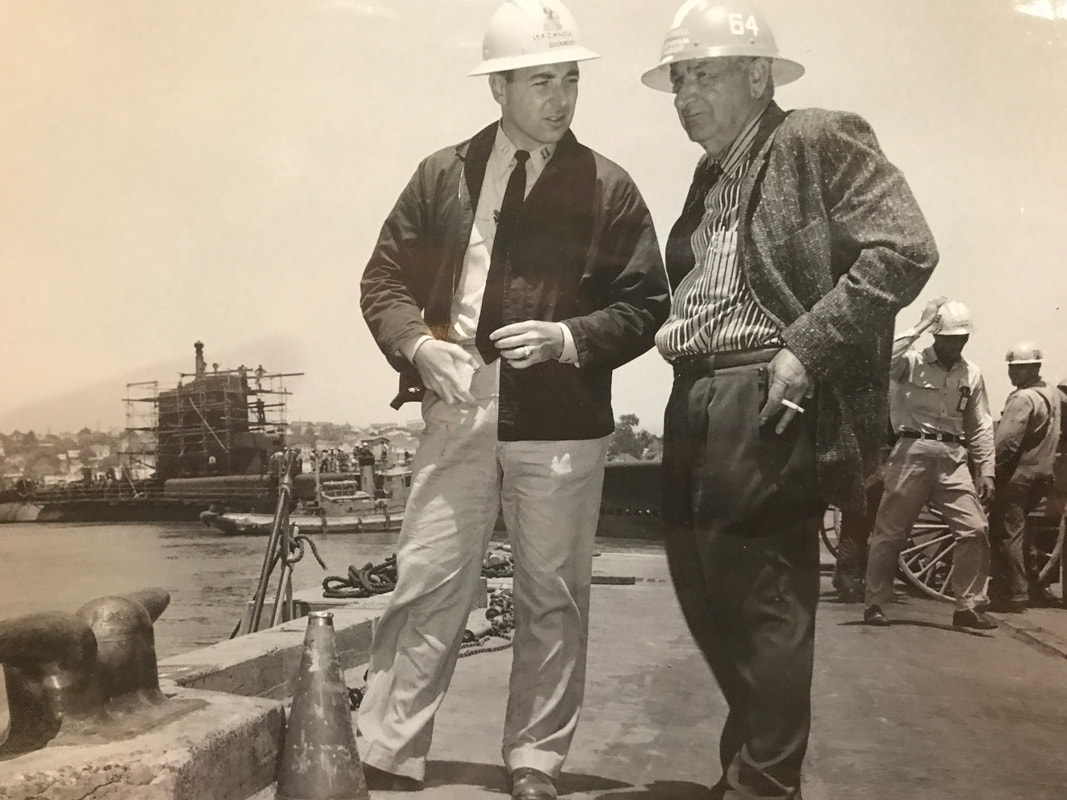 The Mare Island Naval Shipyard was the first United States Navy base established on the Pacific Ocean.  It is located 25 miles northeast of San Francisco in Vallejo, California.  The Napa River goes through the Mare Island Strait and separates the peninsula shipyard (Mare Island, California) from the main portion of the city of Vallejo.  The shipyard made a name for itself as the premier US West Coast submarine port as well as serving as the controlling force in San Francisco Bay Area shipbuilding efforts during World War II.