​As was the custom of the time it was an absolute necessity for the safety of the early female settlers to have a male protector. For this reason we frequently find widows marrying within a few weeks or months following the death of their husbands. As a young widow Cecily 20, this proved to be true as she had married her much older neighbor and a cousin to her mother, Samuel Jordan 42, shortly before December 1620. Cecily is a year younger than Samuel Jordan's eldest son.
Samuel and Cecily settled at "Beggar's Bush" later renamed "Jordans Journey" near the confluence of the Appomattox and James Rivers southside. This plantation took its name from its founder, Capt. Samuel Jordan and appears to have embraced 450 acres. At least in 1625 Jordan was credited with this amount as being "planted" by patent in "the territory of greate Weyanoke." It has been said that he established Jordan's Journey, also known as Beggar's Bush, in 1618 although in the Assembly of 1619 he represented "Charles Citty." He was one of the Assembly Committee of four appointed to examine "the first booke of the fower" of the "Greate Charter." In 1622 Jordan received a share of Company stock from Mary Tue as well as 100 acres in "Diggs his Hundred." At this time he was listed as "Samuel Jordan of Charles Hundred gentleman."

Jordan's Journey seems to have prospered. At the time there were forty-two persons in residence and eight had died within the year. In 1625 the population stood at fifty-five persons (thirty-six males and nineteen females). Corn and fish supplies were adequate and there were some cattle and hogs as well a s numerous poultry. In the matter of houses, the total was quite large-being twenty-two. The plantation boasted of three boats and substantial amounts of small arms (thirty-eight) and armor of various types (thirty-six items).
Cecily was expecting a second child (Margaret) at the time of Samuel's death at Jordan's Journey in the first months of 1623. Samuel Jordan is known to have died prior to the February 16, 1623, because in the census of Virginia colonists, his name is conspicuously missing from the list of inhabitants at Jordan's Journey:
“From Persons of Quality: A List of Names; of the Living in Virginia, February the 16, 1623, Living At Jordan's Jorney”
Sislye Jordan
Temperance Baylife
Mary Jordan
Margery Jordan
William Farrar"
(37 more names follow the above listed.)
Samuel died at Jordan's Journey sometime in early 1623, and an inventory of his estate included his widow, Cecily and her two young daughters, two plantations, five houses, two boats, ten servants, and several coats of chain-mail. The Reverend Grivell Pooley, who had conducted Samuel's funeral, proposed to the widow Cicely within days of his funeral. She apparently consented but subsequently refused to go through with the wedding and accepted a second proposal from Col. William Farrar (the attorney who administered her husband's estate).

Cecily (Reynolds) Bailey - Jordan - Farrar-Montague-Parker
Cecily Reynolds was born in England about 1600, immigrated to Jamestown on the Swan in 1610, and died in Virginia, presumably in 1662.  As such, she was one of the first few European-born women to reach the New World. We now know her mother and step-father Cecily and Will Pierce were on the 3rd Supply foltilla of 1609. Mother Cecily was on the BLESSING while husband was on the Sea Venture. The younger Cecily traveled with her Aunt and Uncle Thomas and Elizabeth Phippen aboard the SWAN in 1610.  She grew into the much-courted and many times married "Glamour Girl" of the Jamestown Colony. She had good friendships with women as well as men; and by the time she was 24 years old, due to the death of her husband Samuel Jordan, she owned outright a successful plantation, Jordan's Landing, one of only four to continue operation after the Indian Massacre of 1622. Both Samuel and Cecily had earned the designation "Ancient Planter" by the London Company of Virginia.
Her first husband, a man named Bailey, fathered Cecily's first child, Temperance Bailey, but died soon thereafter. By the time she was 20, she married Samuel Jordan. She had one child with Samuel Jordan. During the course of that second marriage, Cicely encountered two men who were soon to compete to become her third spouse.


William Farrar had sold his land in Hertsfordshire, England, and arrived August, 1618 aboard the "Neptune." He was the founder of the Farrar's Island.
Before dawn during the Indian Massacre of 1622, he rowed away from Farrar's Island, seeking safety at Jordan's Journey.
There he eventually married Cecily Jordan. William became involved in lawmaking and helped to arrest and deport Governor Harvey on 4 March 1625.
King Charles I appointed him a member of the King's Council. He served on the Court and General Council of Virginia until the early 1630's, when he presumably died.

It is likely that Samuel Jordan made a will, but it does not survive. William Farrar was appointed as executor and overseer of Samuel Jordan's estate several months after his death. At a Court held on November 19, 1623, and presided over by Sir Francis Wyatt, Governor, and Christopher Davison, Secretary, records indicate that a warrant was issued "to Mr. Farrar to bring in the account of Mr. Jordan his estate by the last day of December." Another warrant was issued to "Mrs. Jordan, that Mr. Farrer put in security for the performance of her husbands will." An abstract of the orders were to be delivered to Sir George Yeardley.
The 1619 Great Charter of the Virginia Company had established self-governance through the Virginia Assembly, but James I dissolved the charter in 1624, and put the colony under direct royal authority. Just before James I died in March 1625, Charles I announced his intention to be the sole factor of his royal colonies. To this end, he commissioned a new structure, consisting of a governor, Sir George Yeardley, and 13 councillors, including William Farrar, to govern the royal colony on behalf of the Crown's interest.

Cecily And William Farrar
During the course of the lawsuit in which he successfully defended Cecily, William Farrar performed the duties of executor of Samuel Jordan's estate in 1623 (Jordan's will does not survive). At a Court held on November 19, 1623, and presided over by Sir Francis Wyatt, Governor, and Christopher Davison, Secretary, records indicate that a warrant was issued "to Mr. Farrar to bring in the account of Mr. Jordan his estate by the last day of December."
Within the first year of their marriage William Farrar was given a position of great responsibility when on March 4, 1625/6, Charles I appointed him a member of the King's Council, a position he probably held until just prior to his death in 1636. William and Cecily Farrar continued to reside at Jordan's Journey after their marriage.
Even as the case was ongoing, William Farrar and Cecily Jordan continued to work together at Jordan's Journey. In November 1623, Farrar was bonded to execute Samuel Jordan's will regarding the management of his estate and Cecily Jordan was warranted to put down the security to guarantee Farrar's bondage. During this time, "Farrar assumed the role of plantation 'commander' or 'head of hundred' for Jordan's Journey.  A year later, the Jamestown muster of 1624/25 lists "Ferrar William Mr & Mrs. Jordan" [sic] as sharing the head of a Jordan's Journey household with three daughters and ten manservants.  During this time, Jordan's Journey prospered. By May 1625 Farrar and Jordan were finally married, as it was then that Farrar was released from his bond to Jordan's estate. They had three children together:
The achievement for which Cecily's husband William Farrar is most remembered is the establishment of Farrar's Island, an estate their descendants would own for 100 years. It was located in what is now Henrico Co. Virginia on a bend in the James River at the former site of the city of Henricus, the second settlement of the colony. The estate consisted of 2000 acres, very large for its day, granted to William Farrar for the transportation of 40 settlers. It was not until after William Farrar's death in 1636, at the age of 54, that the patent for Farrar's Island was granted posthumously by King Charles I to his and Cecily's son William Farrar II on June 11, 1637. 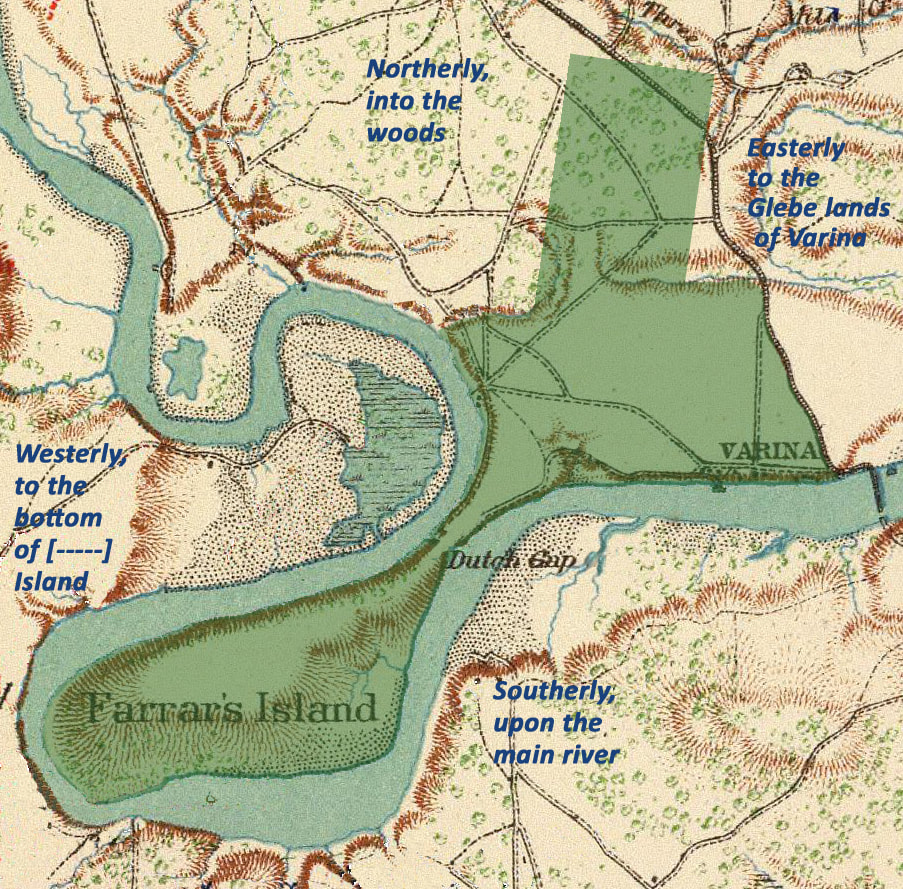 Today in Smithfield, Virginia at the location of "Jordan's Journey," there now stands a historical marker which reads:
"SAMUEL JORDAN OF JORDAN'S JOURNEY
Prior to 1619, Native Americans occupied this prominent peninsula along the upper James River, now called Jordan's Point. Arriving in Jamestown by 1610, Samuel Jordan served in July 1619 in Jamestown as a burgess for Charles City in the New Word's oldest legislative assembly. A year later, he patented a 450 acre-tract here known first as Beggar's Bush and later as Jordan's Journey. He survived the massive Powhatan Indian attack of March 1622 here at his plantation, a palisaded fort that enclosed 11 buildings. He remained at Jordan's Journey with his wife, Cicely, and their daughters until his death in 1623."
Samuel Jordan is also honored with his name being included on the monument at Jamestown.
Today there are impressive brick entrance gates to "Jordan On The James," a high-end residential development. On the pillar is a small insert "c. 1619." In the development there is a road called "Beggars Bush" and outside is "Jordan's Point Road." Nearby one can play golf at Jordan's Point Country Club. The location of Samuel and Cecily Jordan's house, which has perished, was where the base of the Benjamin Harrison Bridge is now that connects both sides of the river. The Jordan Point Yacht Haven is now located at site next to the bridge.
A well known church in the area "St. Lukes" has several stained glass windows in memory of the Jordan Family.