The Regulation movement (or "War of the Regulation") was at first a low intensity action carried on by colonists from about 1765 to 1771 against local and state officials and offices in the Carolinas. The colonials had become upset over issues of unfair taxation, local government corruption, and local government control. At first, the colonial governments did little to intercede; but by early 1771, North Carolina Governor Tryon had had enough, now viewing the perpetrators as full fledged rebels. Governor Tryon sent General Hugh Waddell through Rowan and Mecklenburg to raise troops. Waddell enlisted almost one hundred in Mecklenburg and about the same number in Rowan.  At this time, Captain Merrill had also rallied a company of three hundred men, most of whom were Baptists, from the Jersey Settlement (in what is now Davidson County). It was from here Captain Merrill marched to meet other Regulator forces, who were convinced an overwhelming show of force would intimidate the government forces into withdrawal, rather than to actually fight. The Regulator militia was gathering a large force at a camp site along the Alamance Creek.
On May 9, when marching to join Tryon, Waddell was intercepted at the Yadkin by the much larger force of Regulators under Merrill. Realizing his force was outnumbered, Waddell fell back to the Salisbury District. He was unable to join the governor until after the battle. Meanwhile Tryon had proceeded westward from Hillsborough with just under eleven hundred men. He met the forces of the insurgents at Alamance Creek and defeated them, thereby bringing open opposition of the Regulators to an end.

Battle of Alamance
Before the shooting began, the Regulators were given a choice to dissolve their group or be fired upon. The unorganized Regulators gave no response and thus the Battle of Alamance began. Tryon's well-equipped troops soon put the Regulators to flight. The Regulators had come together with no officer higher than captain and each individual company fought independently. Tryon's artillery fire was very effective forcing many Regulators to seek refuge behind trees and rocks. The Battle of Alamance lasted only two hours. Only nine Regulators had been killed, but had a larger number of men wounded. Tryon collected fifteen prisoners, and executed one on the spot, intending to make a complete mockery of the uselessness of Regulators.
Captain Merrill arrived after the battle had been decided; his force was scattered and he was taken prisoner. Merrill was regarded as a pious man; and was much esteemed wherever he was known. He was within an easy day's march of the place of meeting (Battle of Alamance) with three hundred men under his command, when he heard of the defeat; and if he had got there in time the result could have been different. His men were immediately dispersed, but he was taken prisoner, and his life was the forfeit. In this trying situation he gave his friends satisfactory evidence that he was prepared to die; for he not only professed his faith in Christ his hope of heaven and willingness to go, but sung a song very devoutly just before he swung off, and died with the resignation and composure of a Christian. One of his enemies was heard to say 'If all went to the gallows with Captain Merrill's character, hanging would be an honorable death.'

In the following weeks, Dragoons had been sent through the settlements to burn, pillage, and round up and bring to camp those charged with being dangerous Regulators.... these horsemen were riding through the settlements just across the Yadkin to seize Regulators and bring them as prisoners, among them Abraham Cresson who was a regular attendant an the services at Rev. Murphy's church, and who was sent on to Hillsboro by Tryon to be tried for his life. Several others of the prisoners named as being from neighborhoods convenient to Mr. Murphy's church were Baptists.
Tryon's militia led by Col. Fanning traveled through Regulator territory where he had the Regulators and their sympathizers sign loyalty oaths and destroyed the properties of known Regulator leaders. The remaing Regulators were compelled to retreat and live life in the wilderness. Others migrated by going over the Appalachian Mountains into Tennessee and down into the Holston River Valley. Some followed Daniel Boone's trail into Kentucky. By 1772, just one year later, nearly 1,500 of the former Regulators had left North Carolina altogether.
Many were accused simply being guilty by association, remained in hiding and the fervent Rev. Joseph Murphy was one of them.

Between May 30 to June 20, 1771, the court of oyer and terminer was held at Hillsborough for the trial of the Regulators captured at Alamance. Twelve were convicted of high treason, and six of them were sentenced to be hanged, drawn, and quartered for their part in the uprising, including three officers of the colonial militia who had joined ranks with the Regulator's: Captain Benjamin Merrill, Captain Robert Messer, and Captain Robert Matear.​ Benjamin Merrell, was accused of being a leader of 300 man Rowan Co. militia.

Benjamin Merrell had a reputation as an intelligent, ambitious and hardworking young man as a farmer and prospered and we know by court records. In 1761, the Rowan Co. Circuit Court records show on April 25th, 1761 a case where we find Jas Smith, Benjamin Merrill, Andrew Smith, Alexander Davidson and William Ellis (Alexander Davison’s father-in-law) are all serving on the same jury.

On June 19, Benjamin was hanged by the order of North Carolina Governor Tyron:
"You are to be hanged by the Neck; that you be cut down while yet alive, that your Bowels be taken out and burnt before your Face, that your head be cut off, your Body divided into Four Quarters, and this be at his Majesty's Disposal; and the Lord have Mercy on your Soul."
His wife and eight children were forced to watch, including his youngest, Jonathan, age six. Benjamin Merrell been converted to the Baptist faith just a few years earlier by the preaching of Joseph Murphy. The "Records of the Moravians” tell us that a meetinghouse that was built on the Yadkin River, was where Rev. Joseph Murphy began to preach by the invitation of it's members on November 30, 1768.

It became well known that Tryon's chief henchman, leading the expedition against the Baptists, was Col. Edmund Fanning, who had plans to seize Elder Joseph Murphy.  On June 3, Br. Traugott Bagge, who had charge of the business interests of the Moravians, noted the presence of Fanning with his corps in the vicinity of Murphy's home.
"The vile Col. Fanning accused him (Murphy) of aiding and abetting the Regulation whereof he was as clear as any man whatsoever; yet a party of horses was sent to seize him, but could not find him."
A second account, reads: "He (Murphy) suffered by the regulation though' he had no hand in it; for a detachment of dragoons entered his house, stole his papers, and a new pair of stockings which were the most valuable things, they saw in his little cot."
It is the general belief that if Joseph Murphy had been found at home he would have been sent to Hillsboro, tried for treason, and suffered the same cruel and barbarous death as his fellow Baptist, Benjamin Merrill, who had been seized by the Governor's forces only a few days before.  Since Murphy was the best known and most successful Baptist leader in this section, his removal was probably much desired by all those who shared Tryon's enmity against the Baptists on the ground that they were enemies of "Anglican Church."
Br. Traugott Bagge’s statement: "He could not be found or he would have shared the fate of Merrill."

Brothers William and Joseph Murphy and others, were forced to leave their homes and their congregations they were leading and hide in the western wilderness of the North Carolina and settle in the Holston River Valley in Eastern Tennessee as they were considered outlaws by the crown under the terms of the Riot Act. The Holston country, was a wilderness state, and much exposed to the ravages and depredations of the Indians.  These ministers were all Virginians, except Mr. Tidence Lane, who was from North Carolina. ​​

Joseph Murphy found refuge in what is known as Boone's Cave, a cavern under the bank of the Yadkin near Boone's Ford and the home of the parents of Daniel Boone on the east side of the Yadkin.  They would later return to fight the British at the Battle at Kings Mountain as the “Over the Mountain Men” Following the May 1771 Battle of Alamance, Sandy Creek Baptist Church membership dropped from 606 to 14.
​
While there is no proof that the Murphy’s were fighting as Regulators themselves, however the churches they led at Little River and Dan River churches, were stocked full of Regulator sympathizers if not outright participants, and at least two known Regulator leaders Benjamin Merrill and James Stewart, were admitted Baptists in their churches.

In April 12, 1776, North Carolina becomes the first state to call for independence from Great Britain.​ 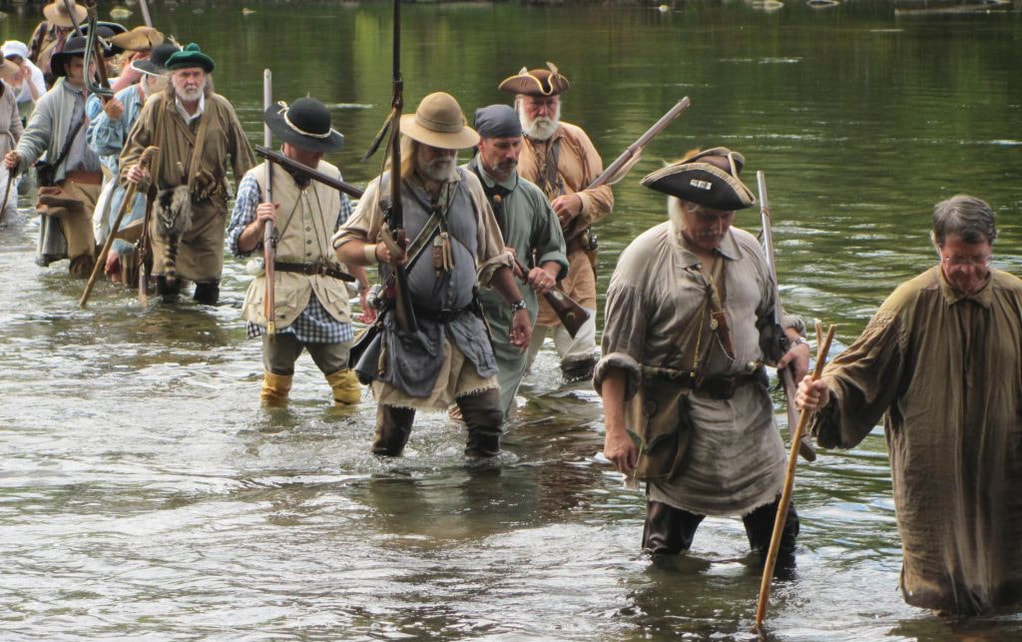 The “Over Mountain Men”
The Overmountain Men were American frontiersmen from west of the Appalachian Mountains who took part in the American Revolutionary War. While they were present at multiple engagements in the war's southern campaign, they are best known for their role in the American victory at the Battle of Kings Mountain in 1780. The term "over-mountain" refers to the fact that their settlements were west of, or "over", the Appalachians —the range being the primary geographical boundary dividing the 13 American colonies from the western frontier. The Overmountain Men helped to solidify the existence of the fragile settlements in the Watauga, Nolichucky, and Holston River valleys.