Local histories are often in error because of several different reasons. First when a new settlement was established, recording the precise date of events was not always done; survival came before historic detail. Second, when the facts were finally written down, specifics were forgotton; so, stories were not always factual and were somtimes embellished by the teller's memories. Third, handwriting and abbreviations were sometimes misread; it was common to abbreviate first names or use only initials. There was no standard penmanship form and many writers had little or no formal education.​

Rachel was the eldest of eleven children. The others were Bathsheba, Helen, Rhoda, William III, Jesse, Seth, Margaret, Hosea, Abraham and Eunice.

Rachel Cook Murphy’s 2 brothers named Hosea and Jesse Cook, her 2 sisters, Bathsheba  Cook Dunn and Margaret Cook Mastin, all had moved to Frankfort KY 1791 with their families.
In the winter of 1791, a new settlement was formed on main Elkhorn about three or four miles below the juncture of the North and South forks, by the families of Jesse Cook, Hosea Cook, Lewis Mastin, William Dunn, William Bledsoe and the overseer of Col. Innis, with three negro men. There was also a single man by the name of McAndre, who resided in the settlement. Their cabins were built about three or four hundred yards apart, in the woods, interwoven with thick cane and undergrowth, so that they could not be readily seen from each other, in what was called Innis’ Bottom. Here they remained undisturbed more than a year.

On November 4, 1791 in the Northwest Territory of the United States of America (Ohio), the Battle of Wabash River or the Battle of a Thousand Slain was a fought.  The U.S. Army faced the Western Confederacy of Native Americans, as part of the Northwest Indian War. It was "the most decisive defeats in the history of the American military.  It was the largest victory ever won by Native Americans.
The natives were led by Little Turtle of the Miamis, Blue Jacket of the Shawnees and Buckongahelas of the Delawares (Lenape). The war party numbered more than one thousand warriors, including a large number of Potawatomis from eastern Michigan and the Saint Joseph. The opposing force of about 1,000 Americans was led by General Arthur St. Clair. The forces of the American Indian confederacy attacked at dawn, taking St. Clair's men by surprise. Of the 1,000 officers and men that St. Clair led into battle, only 24 escaped unharmed.
Six short months later; on April 28th, 1792, tragedy struck.  The facts in the following account of an attack on Innis’ settlement, near Frankfort, in April, 1792, are primarily derived from the Rev. Abraham Cook, a venerable minister of the Baptist church, himself a pioneer, who died in 1855, 90 years of age, and the brother of Jesse and Hosea Cook, the husbands of the two intrepid and heroic females whose bravery is here recorded:
The survivors’ accounts were no doubt were told and retold by fascinated grandchildren and great grandchildren,  the narrative was also preserved in newspaper writing decades later.

The tragedy that occurred at Cook’s Station began with an ominous precursor that no one seem to heed. That a lone Indian was seen riding through the settlement one winter night. This area was suppose to be exempt from lndian depredations stemming from a peace treaty that was designed to keep the Shawnee and Mingo Indian hunting parties north of the Ohio river.

Word of the attack spread quickly through the area and beyond. Daniel Trabue a Revolutionary War veteran who lived 12 miles away, arrived on the scene the next morning in the aftermath of the massacre. There he witnessed first hand the effects of the “mischief” that had been done. They saw the bloody ground where the brother fell. Blood in the cabin floor where the second collapsed and died and the blood where the Indian sitting on the stump had been slain.
He found the two widows washing their husbands bloody clothes, still shaken. After the Indians had left them, they had remained in the cabin for more than two hours, until Colonel John Finney arrived with a company of men. The two wives had been so terrified they hadn’t cried for their husband until they felt themselves safe.

A party of men was assembled to pursue the Indians, but could not “strike their trail”, because a smaller party of Indians cunningly played low lay, was waiting to ambush of any pursuers. When the searches turned back, the Indians slipped off north toward the Ohio River.
This information was learned from 16 year old Jared Demint, who had been captured, but had managed to escape before they crossed the river into Ohio.
The Indians were Wyandotte, one of the tribes living in the Ohio territory or was known then as the Northwest Territory. They had alliances with the Shawnees, who regarded them as “younger brothers”. During the American Revolution they were used as mercenaries by the British Army to attack settlements on the western frontier.
They were know for their many incursions into the Kentucky country, including the siege of Bryans Station and the disastrous defeat of the Kentucky Militia at the Battle of Blue Licks.
The Battle of Blue Licks, fought on August 19, 1782, was one of the last battles of the American Revolutionary War. The battle occurred ten months after Lord Cornwallis's surrender at Yorktown, The Battle  at Blue Licks was led by the notorious Simon Girty.
One of the surviving “Betsys” later said she believed the that the notorious border renegade who led the raiding party was Simon Girty. She claimed to have heard a distinctive voice and Irish accent apart from the Indians.

Their children (order of birth estimated):

2. Bathsheba Cook
b. c1755 Virginia
m. William Dunn in 1776,  He died at the Cook Massacre, 28 Apr 1792 Woodford County, Kentucky as did their two sons. Bathsheba Cook survived the attack.

William Cook, Jr. was identified as the only son of William Cook and Ann Griffin (Griffith) in the family Bible of William Cook III.
The Cook Bible identifies his wife as Margaret Jones. An analysis of all pertinent records in Franklin County, Virginia, and the surrounding area, provides circumstantial evidence, without any contradictory data, that indicates that Margaret Jones was a daughter of Robert Jones and Mary Van Meter who moved from Frederick County, Virginia, to the part of Lunenburg County that eventually became, Halifax, Pittsylvania, Henry and Franklin counties, Virginia.

William Cook is listed in the vestry book of Cumberland Parish in 1751, as a reader at the houses of Joseph Rentfro and Mark Cole on the Blackwater River: A reader was a layman of the Church of England who conducted religious services during the scarcity of ordained ministers. Readers were paid by a county tobacco levy.
That May, President Washington urged Congress to raise an army capable of conducting a successful offense against the American Indian confederacy, it also passed two Militia Acts: the first empowered the president to call out the militias of the several states; the second required that every free able-bodied white male citizen of the various states, between the ages of 18 and 45, enroll in the militia of the state in which they reside.​ 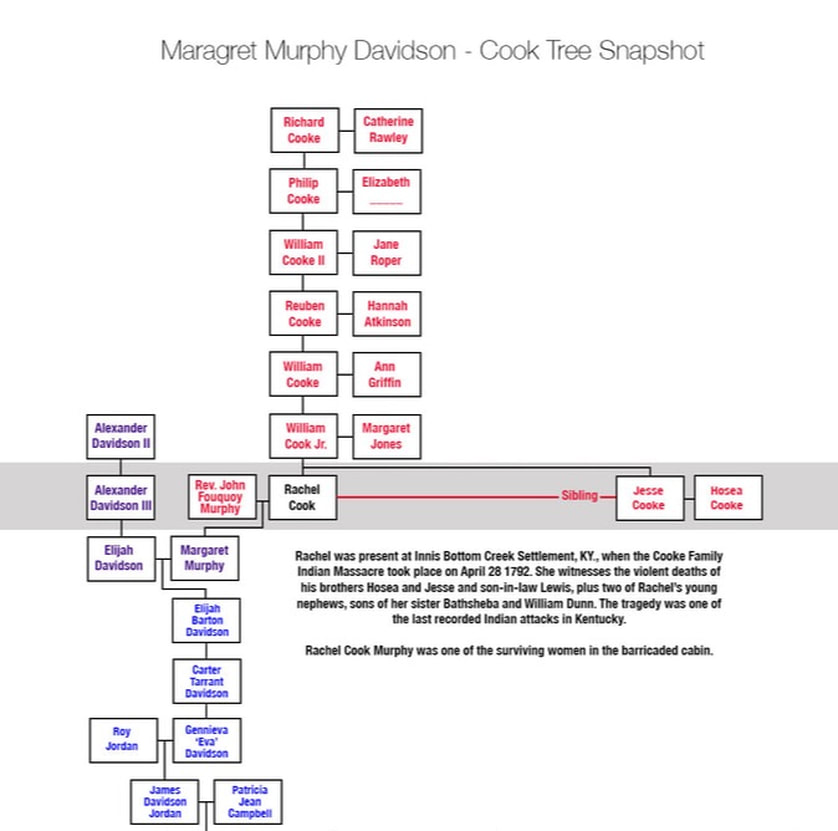