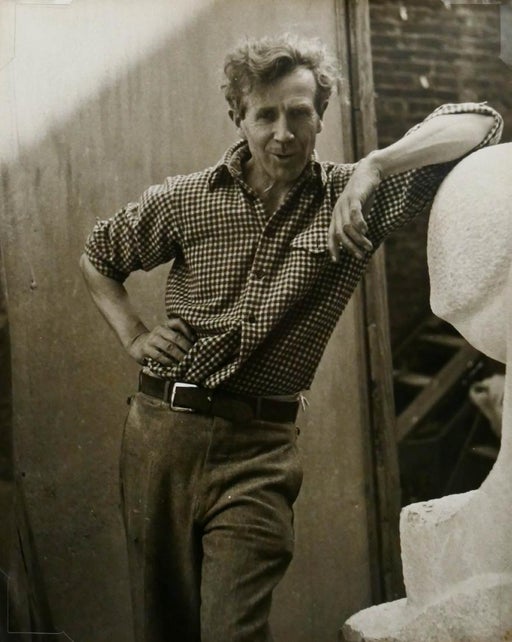 Works of Ralph Stackpole & Friends
Ralph Stackpole in 1901, when sixteen years of age, entered the Mark Hopkins Art Institute of San Francisco. He enrolled in the drawing class under the instruction of Arthur Mathews. To defray his expenses Ralph found it necessary to secure employment. He became a hat checker and ticket taker at Martin's Dance Hall on Market opposite Seventh Street. After four months of drawing, Stackpole became in­terested in sculpture. He then entered the studio jointly occupied by Arthur Putnam, the celebrated animal sculptor, and Gottardo Piazzoni, the internationally known landscape painter.

Arthur Putnam and his Puma Sculpture

Gottardo Piazzoni and his Landscape Painting

From these two masters he learned the fundamentals of drawing and sculpture. Piazzoni and Putnam took close to their hearts the ambitious student. Their art knowledge was freely imparted, and of it the youth drank deeply.

Art study was not a bed of roses for Stackpole. Though Putnam and Piazzoni broke bread with him they could not support him in continuance of his art studies. In 1903, Ralph spent the summer months as a stake holder (marker) for an en­gineering company, surveying the lines for the Grant's Pass Crescent City Railroad. The following year, Stackpole worked the summer months of 1904 as a mucker in an Arizona gold mine. The money earned during those summer months not only en­abled him to apply himself to art studies during the winter., but also for developing an arm to wield mallet against chisel, these manual jobs were ideal.

Toward the close of 1905 Putnam and Piazzoni left for Europe.  At the San Francisco Art Association Spring Exhibi­tion in March of 1906, Stackpole made his debut as a profes­sional artist. His close association with Putnam was shown in the subject matter he exhibited. Putnam's favorite theme, the puma (a mountain lion), which brought him national fame, was also the subject which Stackpole exhibited. Early in April of 1906 Heinz Springer of Lake Coun­ty, California, friend of Putnam and an ardent admirer and patron of young artists, invited Stackpole and Leslie Hunter to visit his estate for a few weeks. They accepted and fortunately for them they did. San Francisco on April 18 of that year was visited by an earthquake, followed by fire which laid waste the major part of the city. Ralph Stackpole's early work and personal belongings were destroyed along with the studio of Putnam and Piazzoni.

On Stackpole's return to San Francisco he found the artists' section completely destroyed. With his best friends and advisers in Europe, and without money, his plight was a sorry one. Telegraph wires to the East began to tell of the suffering of San Francisco's population. Of the countless organizations that solicited funds to care for the destitute, one fund came from the artists of New York. As a substantial sum was sent by them, Stackpole's share was $200.
Long desirous to visit Paris and to see his friends, he resolved to go to Putnam and Piazzoni in Paris, and through them and the facilities that Paris offered, to augment his knowledge of art. Will Sparks, a San Francisco artist, writes in the San Francisco Call of July 15, 1906 and clearly demonstrates his acumen in predicting the future rise of Stackpole:
"Ralph Stackpole, the young sculptor, has gone to Paris to remain an indefinite period. Stackpole has a great deal of talent and I have no doubt but that a year or two of work in the stu­dios and foundries of the world's metropolis of art will put him in the front rank;. At any rate, I expect a great deal of him. Arthur Putnam, a co-worker of Stackpole's, is in Paris at the present time, and together the two expect to take up bronze-casting. In what manner they ex­pect to take up this study I have not been in­formed. Many of the best foundries of Paris guard their mixing and fluxing like Government secrets, but no doubt California grit and genius will find a way to knowledge."
Putnam, Piazzoni, and their wives met Stackpole in Paris. They rented a two-story house with a garret in the western Paris suburb of Neuilly sur Seine. The lower floor of the house was occupied by Putnam to be used as home, studio, and foundry. The Piazzonis had the second, and Stackpole the garret (attic room).

Stackpole enrolled at the Ecole des Beaux Arts in the sculpture class under the renowned teacher; Anton Mercie.

Anton Mercie and sculpture at the Louvre

Montparnesse
In 1905 and early 1906 a group of young artists and poets were holding meetings at various locations believed society, the way it was organized, did not take into consideration an environment needed for new creative expressions. They chose the name L'Abbaye de Créteil by combining the French word phalange (phalanx, the basic military unit in ancient Greece), with the word monastère (monastery) The movement drew its inspiration from the Abbaye de Thélème, a fictional creation by Rabelais in his novel Gargantua.
Founded in the autumn of 1906 by the painter Albert Gleizes, and the poets René Arcos, Henri-Martin Barzun, Alexandre Mercereau and Charles Vildrac.  L'Abbaye de Créteil was to be a "phalanstère", a living environment designed for as a self-contained utopian community, ideally consisting of people working together for mutual benefit.​ Often characterized by their endeavors as a 'search for a synthetic modern art' that gave expression to social ideas.​
The Abbaye artists "scorned the structure of the bourgeois world ​of Montmartre.

They wished instead "to create epic and heroic works of art, stripped of ornament and obscure allegories, new art dealing with the relevant subjects of modern life: crowds, laborers and machines, even, ultimately, the city itself. The intentions of the Abbaye were vast and would ultimately remain unfulfilled.  The Abbaye attracted much interest but little revenue and its young members found themselves forced to close their beloved Abbaye on January 28, 1908

In the summer of 1908, he re­turned to San Francisco, and opened his studio at 728 Mont­gomery Street. In that block, in what would become a haunt of pioneer artists— and the rendezvous of many of the local art colony— Ralph began his art career.
Knowledge of Stackpole's conscientious work in Paris had preceded his arrival. Before his shingle was out, local families, interested in patronizing young artists, had work for him to do.
"Two exquisitely finished busts are the latest productions of the sculptor, Ralph Stackpole. The busts are of Rosalie Heynemann, the eight- year-old daughter, and Lloyd Heynemann, the ten- year-old son of Mr. and Mrs. Alexander Heynemann of 2508 Fillmore Street. The bust of the girl is in clay and both as a portrait and work of art is splendid. The bust of the boy has been cast in bronze. Both of these children are beautifully featured and are excellent subjects for the sculptor. Their parents express them­ selves as being highly delighted with Stack- pole's work and are having the bust of the lit­tle girl hewn by him in marble."
Lucy B. Jerome of the San Francisco Call of May 6, 1909, reports an important commission of Stackpole's, and gives this interesting -glimpse of him:
"At present Stackpole is engaged on the head of the ten-year-old son of Leon Sloss, Jr., whose features, so say the sculptor, partake of the qualities of the Greeks in the regular­ity and perfection of modelling, and who there­fore makes a most interesting subject. Stackpole is a picture of a Paris artist in his atelier when* at work. His costume is pictur­esque and his surroundings equally so. Work means work with him and outside influences are not permitted to enter into his working hours."
​Through his association with Putnam and Piazzoni, Stackpole's course in art has been deeply influenced. When he observed Putnam's masterful handling of sculpture, he abandoned his ambitions to become a painter. However, Piazzoni’s influence in painting by 1911 became just as strong. To settle the conflict of two mediums, Stackpole decided to exoeriment with palette and brush. The decision led him to New York where he studied painting under Robert Henri.
​
While in NY, his first girlfriend was Helen Arnstein Salz (according to Salz) who goes on to earn fame as a NY abstract artist.
After three months of painting, Stackpole received a commission to execute o bronze statuette of Edith Altchal, who later became the wife of Governor Lehmann of New York. His successful handling of the Altchal statuette brought him an invitation to show at the Whitney Warren Architectural Exhibit. In the report of Stackpole's success in the New York exhibit, Katherine Clark Prosser of the San Francisco Call of June 25, 1911, wrote:
"Friends of Raloh Stackpole are showering the artist with congratulations on his latest suc­cess. Word from the East tells of the recent winning by Stackpole of the first prize in a contest for a head of King David of Bible fame. Stackpole's conception of the shepherd king done in plaster carried off highest honor in competition with 200 contestants and the first prize of $100 was awarded the San Franciscan."
The New York success led Stackpole back to San Francisco to again specialize in sculpture. In his rise to recognition, luck played no part in Stackpole's success.

1927. Stackpole spent his vacation, during the winter of Mexico. While there he studied the work of Diego Rivera and Orozco, the great fresco mural painters, and their friendship grew into a profitable relationship. By his sincere nature, Stackpole also gained the friendship of art leaders when in Europe. Those friendships have lasted through the years.
Henri Matisse, post-impres­sionist, when passing through San Francisco en route to Tahiti in April of 1926, visited with Stackpole. The high­ light of his visit was a studio dinner given in his honor by Stackpole and attended by leaders of the local art colony.
Golden Gate International Expositiont

A video of a special time, a time gone by, unaware that within a year the Japanese would be bombing Pearl Harbor in Hawaii, bringing WWII.
Unfortunately, there is an occasional unknown voice-over that has nothing to do with the footage.