The First General Assembly
in America 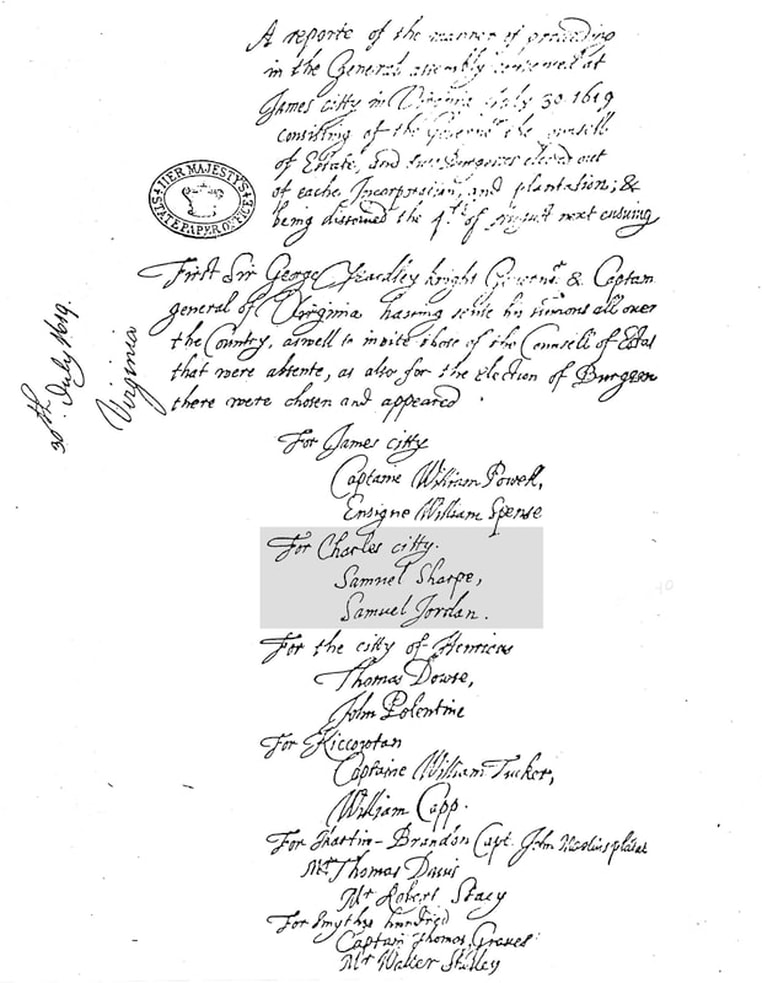 The First General Assembly
By 1618, the Virginia colony and the Virginia Company were struggling with very few profits for investors, a high death rate, inadequate finances and quarrelling leadership.
When the Company appointed a new governor for the colony in 1618, Sir George Yeardley, it also provided him with new instructions that directed Yeardley to implement immediately upon his arrival. The instructions included the replacement of military law (implemented in 1610) with English common law, an improved local administration in the various settlements in the colony, and a new land policy that allowed settlers to own land and work for themselves.
More importantly, it also called for the election of settlers to form a “General Assembly,” so that they could “establish one equal and uniform government over all Virginia” and to pass “just laws for the happy guiding and governing of the people there inhabiting.”
When Governor Sir George Yeardley arrived in Virginia in 1619, he wasted little time calling for the selection of two representatives from each of the eleven major settlement areas. It is not known how the candidates for representation to the first General Assembly were selected. However, it appears that, at least for most the remainder of the century, all free males could vote. This did not include indentured servants.

On a sweltering July day about 400 years ago, a group of white settlers met in a chapel to come up with laws to govern the nascent British colony in Virginia. The fact of the matter was Jamestown was a floundering enterprise that needed a new business plan. The goal was to great a new, more palatable local government made up of strictly local residents, which were company appointed counselors of state, and burgesses elected by the free males in the colony. The were selected because they had successfully thrived in under difficult circumstances of Jamestown life. These assemblymen had the power to enact local ordinances with an eye for improving local productivity and giving white, free landholders a greater say in their own business affairs. However, Governor Yeardley was given veto power.
The Assembly met during what one diarist, John Porry, describes those days as a “torpid summer.”
The session lasted six days, from July 30 to August 4, 1619. (cancelled because of the sweltering heat, one member had died and Yeardley himself, became sick) Later that month, enslaved Africans arrived on a Dutch merchant ship, setting the stage for over two centuries of human bondage.

The Burgesses
The members of the Assembly was the very first elected legislative assembly in the New World. Over time, the name came to represent the entire official legislative body of the Colony of Virginia, and later after the American Revolution, the General Assembly of the Commonwealth of Virginia.
Meanwhile, the officers of the Virginia Company in London embarked upon a series of reforms designed to attract more people to their financially troubled settlement. They began by ending the monopoly on land ownership, believing that the colonists would display greater initiative if they had an ownership position in the venture. The changes encouraged private investment from the colony's settlers which allowed them to own their own land rather than simply being sharecroppers. Four large corporations, termed citties, were designated to encompass the developed portion of the colony. Company officials also made justice in Virginia more predictable by adopting English Common Law as the basis of their system, which replaced the whims of the governor as the final voice on legal matters.
In the first meeting of the General Assembly in 1619 in Jamestown, the Assembly members concluded that “in a newe plantation it is not knowen, whether man or woman be the more necessary.” 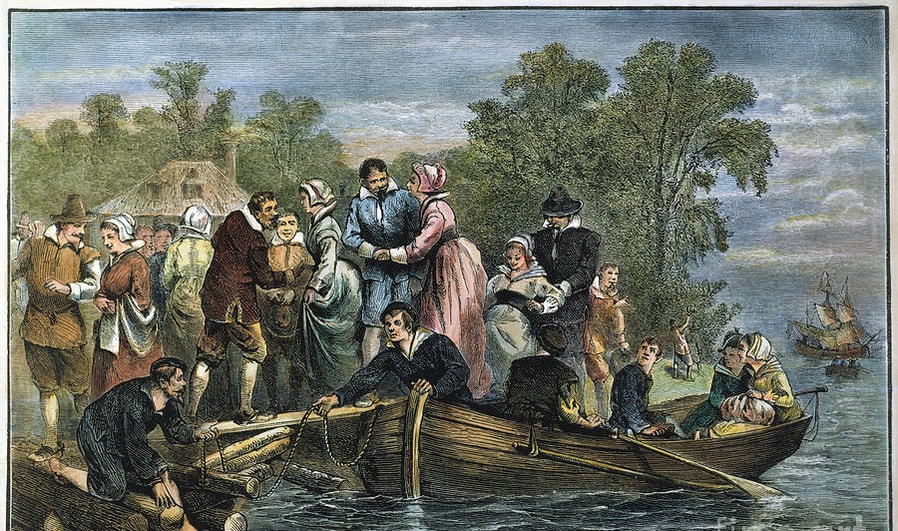 In 1620, in an effort to create a more stable society, the company dispatched a boatload of marriageable women to the colony; the going rate was 120 pounds of tobacco for each bride. In the years 1620-1622, the Virginia Company recruited and sent about 140 maids to the colony. These young women came at the request of planters, to become their wives, provided the men reimbursed the Company for the women’s passage. The maids who came in 1621 were highly recommended for their social respectability and domestic skills. The Company provided a variety of clothing and accessories for each of them. Other English women signed on to go to Virginia as indentured servants for terms of four to seven years.

The first meeting of the House of Burgesses occurred on Sep 30, 1619 at Jamestown. The assembly comprised 22 members who represented the following constituencies: The House of Burgesses was empowered to enact legislation for the colony, but its actions were subject to veto by the governor, council and ultimately by the directors in London. Nevertheless, such a legislative body would have been unthinkable in the Spanish or French colonies of that day, which highlights the degree to which the concept of a limited monarchy had become accepted by the English people.  Voting for the burgesses was limited to landowning males over 17 years of age.
The initial cites (corporations) and the plantations and their representatives in the House of Burgesses in 1619 were:
​
Later, the King of England would take much more control of Virginia, restricting the powers of the House of Burgesses. In 1624, the Virginia Company lost its charter, and Virginia became a royal colony. As a Royal Colony, the House of Burgesses consisted of two members from every county in Virginia and one member from each of the following: the City of Williamsburg, the City of Jamestown, the City of Norfolk, and the College of William and Mary. The House of Burgesses continued to meet, but its influence was severely restricted. Despite limitations on its actions, the assembly listed within its later ranks such notables as George Washington, Thomas Jefferson and Patrick Henry, and would assume a major leadership role in the movement toward independence.