THE BATTLE OF NIEUWPOORT

A military man, Captain Samuel Jordan was from Dorsetshire, England, the son of Robert Jordan. Samuel, (b. ca. 1578 – d. June 4, 1623) he was a young widower and a father of three sons, who would later followed him to the Virginia Colony.  Samuel Jordan was a veteran of the Dutch wars and the Battle of Nieuwpoort in Flanders, between the Dutch army under Maurice of Nassau and the English troops under Francis Vere against the Spanish Hapsburgs army led by Albert of Austria.

Queen Elizabeth was aiding the Dutch rebels against Philip and Henry of Navarre and Philip's French allies.
The Battle of Nieuwpoort took place on July 2nd, 1600, was one of the most desperately contested battles of the age, and completely defeated 10,000 veteran Spanish troops led by the archduke Albert. The English regiments faced the veteran tercios of the elite of the Spanish infantry. The English, well drilled in Maurice's new tactics, could kept a rolling fire on the Spaniards and advanced up the slope at a steady pace, covered by a screen of skirmisher harquebusiers.

This new tactic was about improving the rate of infantry fire. The typical line of musketeers could unleash only one volley before being overrun by a determined enemy onrush. Any army that could improve upon this rate of fire would command a significant advantage on the battlefield. To accomplish their objective, the infantry fire would have to be extended to increase the size of an individual volley and create the opportunity for a more rapid rate of discharge once the ranks had more room to fall back and reload. The new tactic required a revolutionary, new kind of drill. Each soldier needed to learn a series of well-timed steps in order to efficiently implement the new tactic. Those steps documented to paper in the world’s first illustrated drill manual. The manual contained 15 drawings for pikemen, 25 for arquebusiers, and 32 for musketeers. When converted into actual commands, the pikemen practiced 31 maneuvers, while the musketeers trained for over 40, including the maintenance of formation, simultaneous fire, counting in unison, and countermarching.
Maurice had incessantly drilled his men, soon the Dutch and English regiments could conduct numerous turns and marches without the slightest confusion. The soldiers could reload their weapons (all of identical caliber) in the two minutes between being in the back rank and moving to the front, and they could also conduct an organized fallback to the fifth or sixth rank amid close-quarter pike combat or a cavalry charge. There, they would continue their deadly work at point-blank range. Besides increasing the length of each rank, they reduced the size of each unit, making them far smaller than their Spanish rivals. They believed that smaller units would train and coordinate more effectively together, adding to increased battlefield mobility. 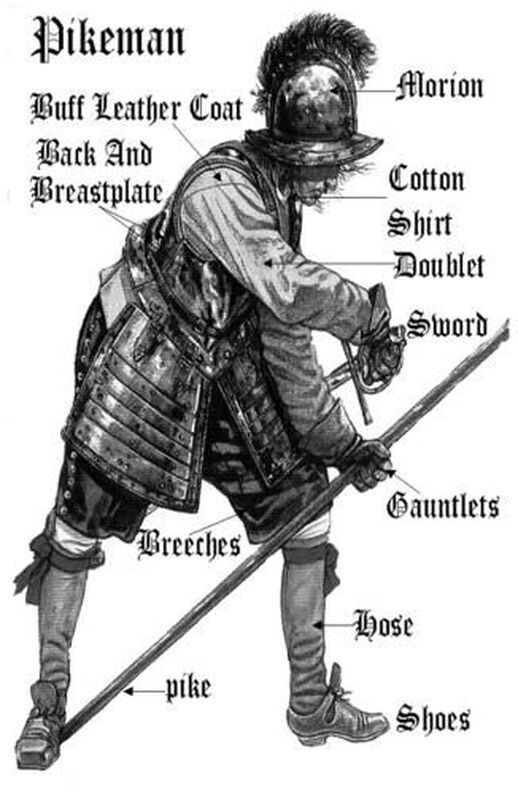 Just prior to the main battle, Spanish troops of the Royalist army had murdered and executed hundreds of Republicans soldiers who'd either surrendered under a safeguard or were already unarmed prisoners of war. This atrocity wasn't forgotten when just a few hours later the Royalist army had collapsed and the infantry was surrounded.
The fight of Nieuwpoort was even for a time, until it came to the push of pike, the Spaniards finally dislodging the English from the top of the hill and the English were momentarily routed. However, the Spaniards, exhausted after a day of fighting and marching on difficult terrain, did not press their advantage. Even more dangerously, they were disordered, with musket and pike units mixed. Maurice sent his reserve cavalry against them. Their well-timed charge was unexpectedly very successful. The Spaniards were thrown into confusion and started a slow retreat. The English companies rejoined the fight, and the Spaniards, heavily assailed, retreated in disorder.
At the time it was common for infantry to accept the surrender of enemy infantry once the battle was over. But at Nieuwpoort no mercy was shown to the surrounded Spanish foot. Entire regiments were killed to the last man and ceased to exist. Perhaps half the Royalist foot had by that time dispersed to try to find a way back among the dunes. Maurice however organized a proper pursuit as soon as victory was his. In the hours after their army's collapse, most Royalist routers were cut down by cuirassiers, shot dead by musketeers and calivermen, or drowned when trying to escape through the surrounding marshes.
The bloodshed was unprecedented: the battle of Nieuwpoort, fought between two 10,000-men armies along a front of just 1,000 yards, witnessed a staggering 10,000 men killed, not counting the wounded and prisoners. The entire Royalist infantry was destroyed, mostly killed, and more than 120 banners were captured.

The significance of the campaign and especially the battle of Nieuwpoort was in many ways a turning point of history: it introduced Maurice's military revolution to the world and thereby changed the way of war forever, it pushed the rise of the Netherlands as a superpower and the decline of Spain. Thanks to Maurice and Nieuwpoort, the art of war became the science of war. His revolution – introducing drill, two-part commands and standardization – proved to be the bedrock of later Western hegemony and therefore the world we now live in. 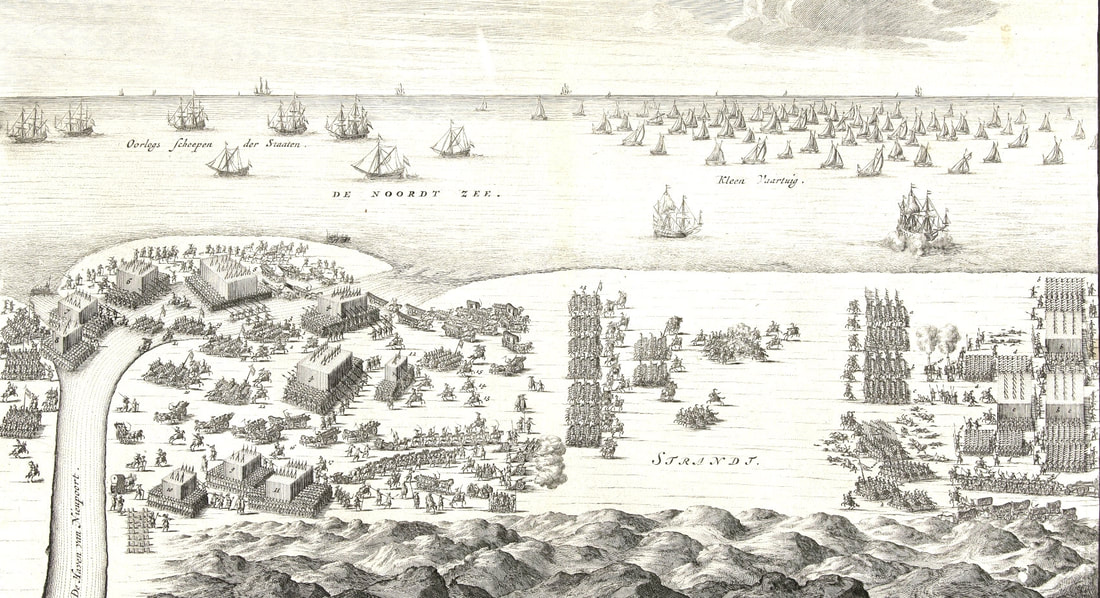 ​By 1602, there were up to eight thousand English troops fighting in the Netherlands. Queen Elizabeth died in 1603. Samuel and his cousins Tom and Jack Reynolds would continue to fight as mercenaries until 1605, when Tom and Jack were killed in battle.

In 1608 Samuel’s wife, Francis Jordan dies. Now as a young widower and a father of three sons, Samuel Jordan decides to use his Dutch mercenary skills and join the Virginia London Company’s expedition to the New World.

Samuel’s experience fighting the Spaniards and a willingness for adventure made him an ideal candidate for employment in the New World.  His military experience would later prove invaluable withstanding the Indian massacre of 1622. 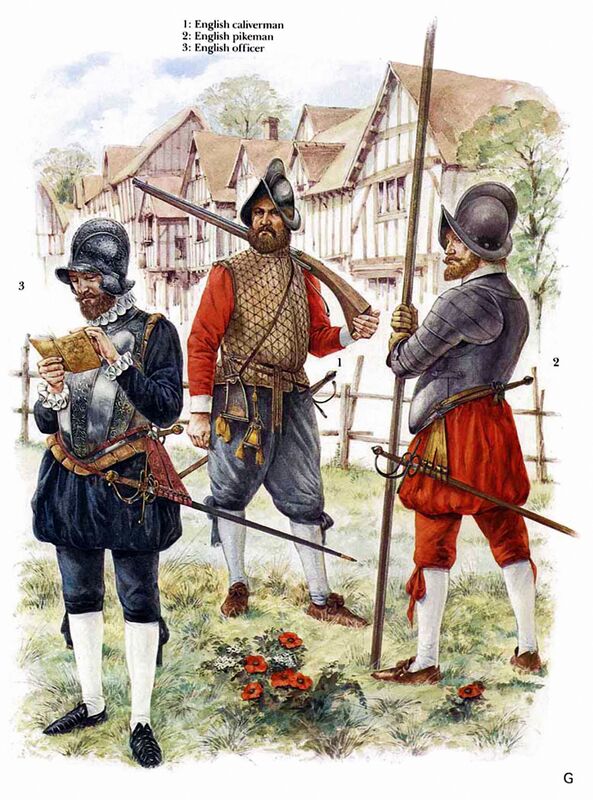