Ypres-Lys Offensive
The officers and men after nine days of fighting were exhausted when the regiment and the Division was relieved of October 5th, 1918. The march out of the Meuse-Argonne made with great difficulty and the men fell exhausted at every halt.
The Regiment was assembled at Dombasle on Oct 7th and replacements were received to fill the ranks of officers and men for those killed and wounded.
In mid-October General John Pershing ordered the 37th and 91st Divisions away from the Meuse-Argonne to be transported by rail to Belgium to assist the French in the Flanders Ypres-Lys Offensive, which had begun two months earlier on August 19, 1918.

On the 19th, the 363rd arrive in the vicinity of Ypres, from there it marched toward the front, training its replacements and prepared for the Ypres-Lys Offensive.
The “Boche” had been pushed back across the Lys River. The 91st was selected along with the 37th Division for operations east of the Lys River. By this time, the men of the regiment had a high reputation for its dash in offensive action. Many believed that this may be the final struggle that the enemy had forced into the open in a running fight.
The men marched on, slept in holes, barns and many times in the open under nightly “aero-plane bombardment”.
On October 30, the 91st was in place with the British division on their right and the French on their left and the enemy less that 50 yards away in some places. Unlike the shell torn fields of or Argonne, the Flanders battlefield of this offensive was over pastures, farms and villages occupied by Belgium civilians. The Boche had taken advantage of the field hedges, farmhouses and place machine guns in the attics of barns and snipers in windows of farmhouses.

On October 31st, at 6:30 the 91st Regiment went over the top under the cover of their own artillery barrage which failed to clean out the Germans who were at close range. The assault waves were met by a storm of machine gun fire. There was canal and barbed wire to cross under this incessant fire. But he men gallantly dashed to their tasks with determination. It was only thus that the Regiment was saved from being wiped out for the loses in killed and wounded  were withering in the first half hour. In one company all the officers and the First Sergeant were killed and most of the other companies had to continue the fight with only but  one or two officers to lead them.
Driving on in the face of enemy fire and heavy gas and high explosives shell bombardment that the Germans laid down on the advancing troop. But the resiliency of the Regiment drove the Boche form its first position and the retreat began which carried them over the Scheldt River. As the men pushed forever through the farm fields, the Belgiums, who for four years been under the helot the Boche rushed out to great the Americans with food and wine, cheering them on their way. With first their objective gained on the first day, the advance continued for a second and third day. The German retreating used their artillery was used to check their advance.

On November 2, the Regiment reach the city of Audnarde, and the Germans had blown up the bridges over the river and withdrew to the heights to the east. On the night of the 2nd and 3rd of November the 91st withdrew from the line and march back to Oostrosbeke. The line was take over by the French and held until the next offensive on November 10th, when the 91st Division was again place for the attack. By this time new make shift bridges had been thrown over the River. Again the 363rd went to the front, crossing the Scheldt River in morning of the 10th. The enemy was resistance had been weaken and a few machine guns and snipers were left as the Germans were rapidly withdrawing from the heights back to Brussels. The Regiment was advancing as night fell.
The next morning the battalion and company officers met for instruction to commence to next attack. They had been just dismissed back to their men when word came down that an Armistice had been signed just as the Regiment was in position ready to attack.  Word that hostilities had ceased just prior before they were to go over the top on the morning Nov. 11th 1918, left some men cheering and others disappointed.

Unbeknownst, Turkey had signed an armistice at the end of October and Austria-Hungary followed on November 3rd. Germany began to crumble from within. Faced with the prospect of returning to sea, the sailors of the High Seas Fleet stationed at Kiel mutinied on October 29th. Within a few days, the entire city was in their control and the revolution spread throughout the country.
​
On November 9th, the Kaiser abdicated; slipping across the border into the Netherlands and exiled. A German Republic was declared and peace feelers extended to the Allies. At 5:00 am, on the morning of November 11th, an armistice was signed in a railroad car parked in a French forest near the front lines.
The terms of the agreement called for the cessation of fighting along the entire Western Front to begin at precisely 11:00 that morning. After over four years of bloody conflict, the Great War was finally at an end. 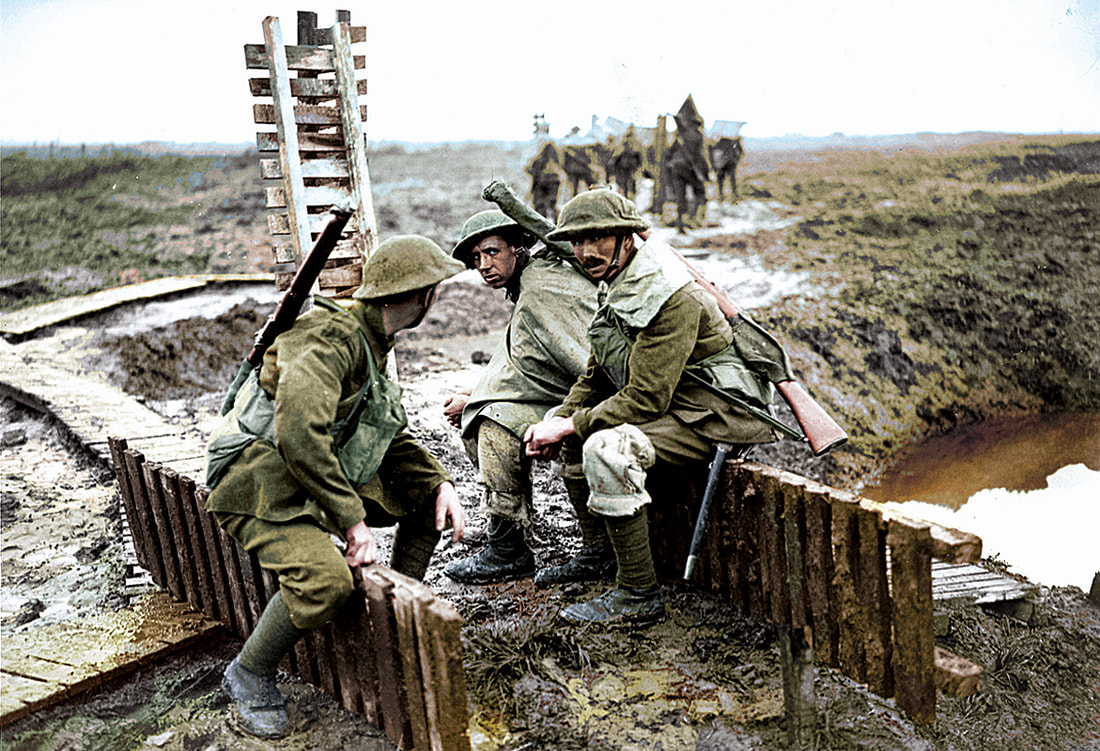 "At the front there was no celebration."
Colonel Thomas Gowenlock served as an intelligence officer in the American 1st Division. He was on the front line that November morning and wrote of his experience:
"On the morning of November 11th, I sat in my dugout in Le Gros Faux, which was again our division headquarters, talking to our Chief of Staff, Colonel John Greely, and Lieutenant Colonel Paul Peabody, our G-1. A signal corps officer entered and handed us the following message:
Official Radio from Paris - 6:01 A.M., Nov. 11, 1918. Marshal Foch to the Commander-in-Chief.
1. Hostilities will be stopped on the entire front beginning at 11 o'clock, November 11th (French hour).
2. The Allied troops will not go beyond the line reached at that hour on that date until further orders.

With only a few hours to go until 11:00, the shelling was still heavy and, it grew steadily worse. It seemed that every battery in the world was trying to burn up its guns. At last eleven o'clock came - but the firing continued. The men on both sides had decided to give each other all they had with their farewell to arms. It was a very natural impulse after all their fighting, but unfortunately many fell after eleven o'clock that day.
​
All over the world on November 11, 1918, people were celebrating, dancing in the streets, drinking champagne, hailing the armistice that meant the end of the war. But on the front there was no celebration. Many soldiers believed the Armistice was only a temporary measure and that the war would soon go on. As night came, the quietness, unearthly in its penetration, began to feed their anxieties, eat into their souls.
The men sat around log fires, the first they had ever had at the front. They were trying to reassure themselves that there were no enemy batteries spying on them from the next hill and no German bombing planes approaching to blast them out of existence. They talked in low tones. They were nervous.
​
After the long months of intense strain, of keying themselves up to the daily mortal danger, of thinking always in terms of war and the enemy, the abrupt release from it all was physical and psychological agony.
Some, of a steadier temperament, began to hope they would someday return to home and the embrace of loved ones. While other, could think only of the crude little crosses that marked the graves of their comrades, brothers from boot camp. Some fell into an exhausted sleep. All were bewildered by the sudden meaninglessness of their existence as soldiers - and through their teeming memories that paraded a swiftly moving cavalcade of St. Mihiel, the Meuse-Argonne and Sedan.
​
What was to come next? They did not know - and hardly cared. Their minds were numbed by the shock of peace. 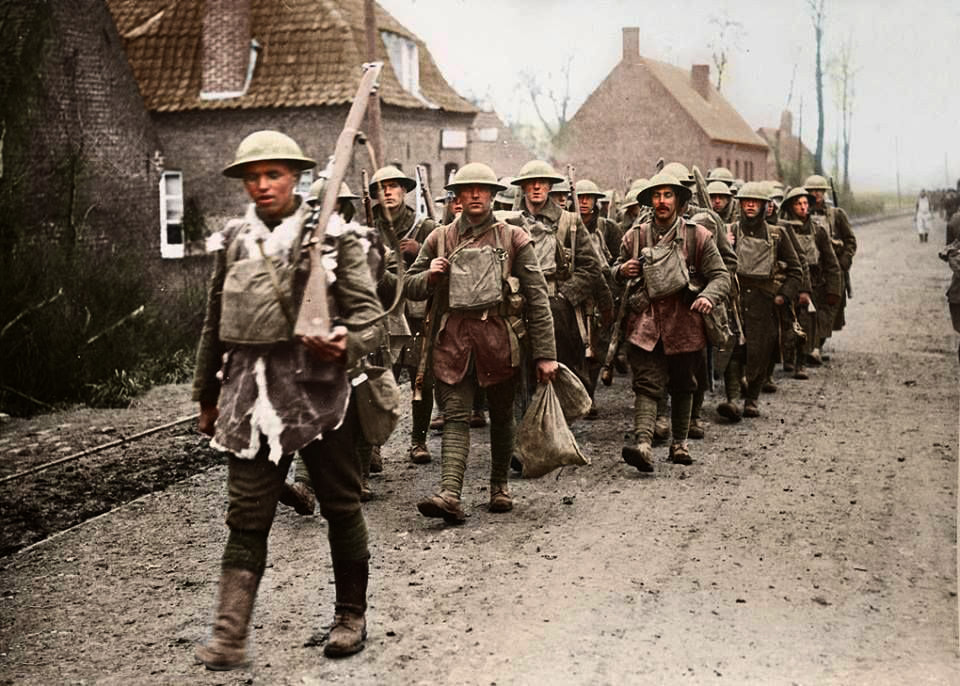