Ralph Stackpole’s sculpture Kneeling Woman, 1943, is on view in the FDR Presidential Library and Museum in Hyde Park, NY. While the sculpture was commissioned by FDR, once it arrived on site he did not appreciate the artist’s new style of working and banished the sculpture to an isolated location on the grounds of the estate. Reinterpretation of the sculpture endeavored to conserve the sculpture and bring it into the museum building. Conservation included carefully removing decades of soiling and biological growth by hand, consolidating weak areas of the Travertine marble, and toning some irreversible staining using archival and reversible materials.
Sculptor Ralph Stackpole
In 1928 Architect Timothy Pflueger had commissioned from Stacpole two heroic pieces, Mother Earth and Man & His Invention, for the front of the SF Stock Exchange. At the time, the sculptures two of the most ambitious granite sculptures undertaken in the U.S. in those years. Ralph was best known for integrating monumental paintings and sculpture representing the working class, along with architectural elements, his works can still be seen at the San Francisco Stock Exchange, the City Club of San Francisco, the Coit Tower, and the proscenium arch (the arch that separates the stage from the auditorium) in the Paramount Theater on Oakland, CA.
At the Sansome Street tower entrance of the Stock Exchange, Stackpole worked on a scaffolding with a crew of assistants to direct carve heroic figures in stone. After the building was completed, Stackpole was finally successful in winning a commission for Rivera; Pflueger became convinced that Rivera would be the perfect muralist for decorating the staircase wall and ceiling of the Stock Exchange Club. This was a controversial selection considering Rivera's leftist political beliefs in contradiction to the Stock Exchange's capitalist foundation. Into the mural, Rivera painted a figure of Stackpole's son Peter holding a model airplane.​
Ralph Stackpole was always concerned about social realist causes, especially​ during the 1930′s he was part of a Depression Era program dubbed the Federal Arts Project for the Works Progress Administration. He was also one of the early instructors at the Calif. School of Fine Arts. It was during this decade that Stackpole worked on many projects with famed San Francisco architect Timothy L. Pflueger, most notably the San Francisco Stock Exchange Building.

During his stay, Rivera and his wife Frida Kahlo lived and worked at the studio, becoming in the process lifelong friends with Stackpole and Ginette (Ralph's wife). They met tennis champion Helen Wills Moody, an avid painter-hobbyist, who soon agreed to model for Rivera at the studio for the staircase mural.. Neighbor Maynard Dixon saw the attention, and the American money being given to Rivera, and with etcher Frank Van Sloun organized a short-lived protest against the Marxst artist. However, both Dixon and Van Sloun quickly realized that the San Francisco art world “oligarchy” who were obviously smitten with Rivera, including Stackpole’s well-connected patrons, were the same group that they themselves would need to support their own art aspirations.
Ralph Stackpole was a popular artist of stature who had special status in pre-war San Francisco. He stood at the center of its artistic circles.
“He knew everybody in town from top to bottom”, Kenneth Rexroth (regarded as a central figure in the San Francisco “Beats” Renaissance, and paved the groundwork for the movement) remembered Stackpole in 1929, “and he took us everywhere”. 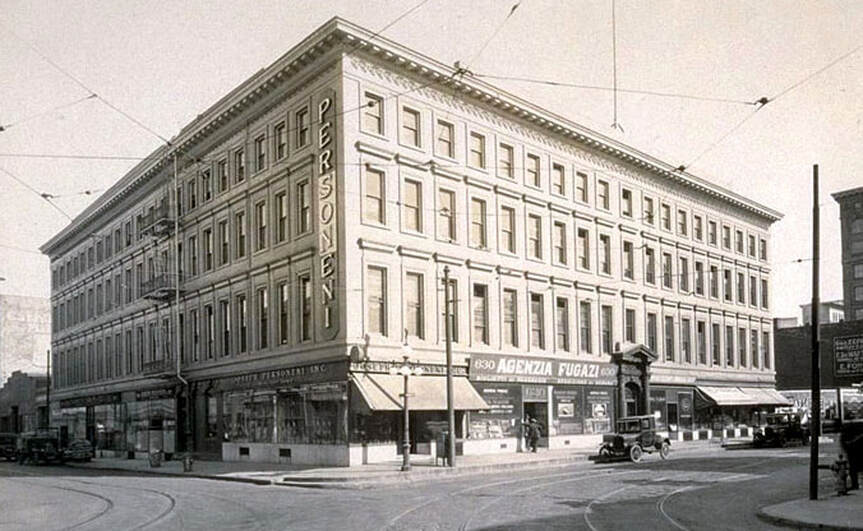 The Montgomery Block 1924
The Montgomery Block
The rich culture and personal histories of a community of artists living and working in the vicinity of Montgomery Street in San Francisco that were part of an artistic renaissance nourished by federal arts programs from 1933-1943.
Like other New Deal programs that forged a new social contract with Americans and their government, the federal arts projects deeply affected the lives of the people they touched. Unprecedented government patronage not only enabled artists, writers, musicians, dancers and actors to productively survive the Depression, it encouraged collaboration, brought an array of free cultural programs to Americans for the first time, and forged a bond with the public through exhibitions, education programs and public performances. New Deal artists developed cooperative social and working relationships with one another and shared a sense of responsibility for bringing cultural programs to “Main Street” America rather than to elite patrons and collectors.
WPA-funded artists who had studios at the Block included Sargent Johnson, Dong Kingman, Herman Volz, Paul Carey and Clay Spohn. They were part of an illustrious North Beach artistic community that included sculptor Ralph Stackpole, whose studio was just two doors up from the Black Cat on Montgomery Street, Maynard Dixon, Diego Rivera, Frida Kahlo, Dorothea Lange and Ruth Cravath. Many of them recalled the time they were on WPA assistance as some of the happiest and most productive years of their lives.
Artists in San Francisco were concentrated in an area of a few blocks and others lived in close proximity — living, working, eating, drinking and talking on a daily basis, both collaborating and influencing one another’s work.

The huge brick Montgomery Block building served initially as studios and apartments for writers including Mark Twain, Bret Harte, Ambrose Bierce, Robert Louis Stevenson, Jack London, George Sterling, and Emma Goldman. The building miraculously survived the San Francisco earthquake and fire of 1906. By the 1930s, as many as 75 artists and writers had studios or apartments with rents as low as $5 per week in the building they had affectionately dubbed the “Monkey Block.” They and other artists were part of a lively arts scene that carried over into the bars and restaurants of the surrounding neighborhood.  Luminaries such as Diego Rivera, Frida Kahlo, Ralph Stackpole, Maynard Dixon, Dorothea Lange, Benny Bufano and Sargent Johnson were part of this vibrant community which by the early 1930s epitomized the working relationships fostered by the federal government’s programs for the arts.

It was during this era that the building was nicknamed “the Monkey Block,” a jocular reference to the erratic behavior of its inhabitants.

The Black Cat Cafe, located at 710 Montgomery, was the Canessa Building’s next door neighbor. In the 1930s and 1940s, the Cat attracted a bohemian clientele of both straight and gay writers, artists and musicians from the neighborhood. Many lived and worked across the street in the historic Montgomery Block building where the Transamerica Pyramid now stands.”
Some of the artists saw their efforts tied to grassroots activism. Artists in San Francisco organized to get work and linked their work initially to labor organizing efforts, particularly the 1934 San Francisco General Strike. Bernard Zakheim, Kenneth Rexroth, Frank Triest, Victor Arnautoff and Ralph Stackpole were influential in forming the Artists’ and Writers’ Union to pressure Washington to initiate a federal art project. Their efforts resulted in the first New Deal mural project in the U.S. — Coit Tower on Telegraph Hill. This project, the combined work of 26 artists and their assistants, took place during the General Strike. The artists could see the labor actions unfolding on the Embarcadero below. Two strikers were killed by the police in the heated struggle. At one point the artist’s union organized a picket line around the tower to protect their murals from a vigilante committee attack.

Mexican muralist Diego Rivera was a major artistic influence in San Francisco. Rivera had come to paint a mural at the San Francisco Stock Exchange Club. Some local artists had previously visited Rivera in Mexico City, and others were certainly influenced by the extensive public work of the three famous Mexican muralists – Rivera, Orozco and Siqueiros. Rivera and Frida Kahlo made quite an impression on the local artists, and one writer wrote a short story about them referring to her as the “Queen of Montgomery Street.”
Rivera’s assistant Emmy Lou Packard, who had a studio next to the Montgomery Block, said, “I have the feeling in talking to people who were on WPA in all parts of the country that they look back upon this as really the most rewarding time of their lives. I feel, and they seem to agree, that this was a time when they all had something in common and they were all working, paid a minimum salary, but nevertheless they were able to live on it, since things were pretty cheap in those days, rent and food and so on…So all of these artists had a feeling of community. They felt they were together…it’s a period I think we would do well to repeat. 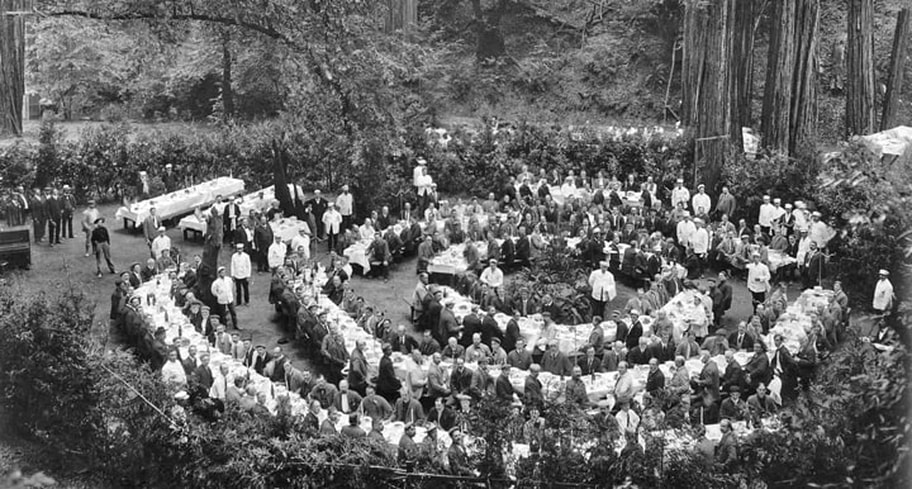 The Bohemian Club
Stackpole was considered bourgeois in his attitudes and lifestyle - he was very connected to the Bohemian Circle of Artists. His studio was popularly call the the “Bohemian Block”.
Ralph's sizable San Francisco studio at 716 Montgomery Street, served as a social center for San Francisco's artist community and the Bohemian Club. Photographer Dorothea Lange rented upstairs studio space there in 1926, and Helen Clark and Otis Oldfield, both artists, married there the same year. Lange's husband Maynard Dixon had his studio next door, and the Stackpole and Dixon families were very close—both men were members of the infamous.
Bohemian Club.
The Bohemian Club is a private gentlemen's club. Founded in 1872 from a regular meeting of journalists, artists and musicians.
One of it’s members was Jack London who is best remembered as the author of The Call of the Wild and White Fang. London was a passionate advocate of unionization, socialism, and the rights of workers. Other noted members of the Bohemian Club during this time included Ambrose Bierce, John Muir, Gelett Burgess, and Frank Norris. Frida Khalo and Diego Rivera would have been visitors as guests of Ralph Stackpole.
Eventually, the group relaxed its rules for membership to permit some people to join who had little artistic talent, but enjoyed the arts and had greater financial resources. Unfortunately, the consequences turn the original "bohemian" members into the minority and the wealthy and powerful controlled the club.  During the 40's, it soon began to accept businessmen and entrepreneurs as permanent members, as well as offering temporary membership to university presidents and military commanders who were serving in the San Francisco Bay Area.
The Bohemian Club has since been reported to have become the “behind-the-curtain” power-brokers club of the rich and famous, hand picking past California Governors and US Presidents, and has been visited by numerous U.S. Presidents dating back to Teddy Roosevelt up to G.W. Bush. 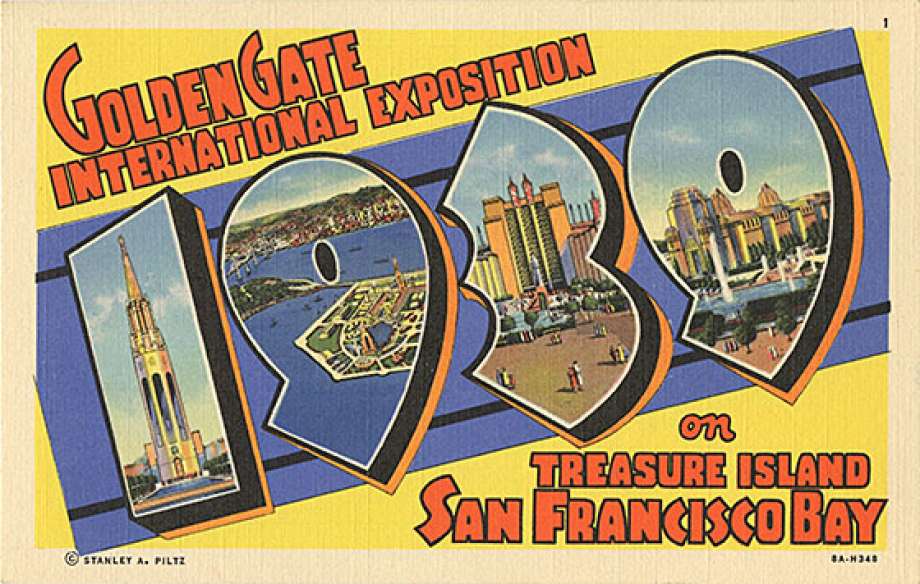 Ironically, sensing the possibility of war with Japan, the United States Navy had leased the island as a recruitment center in 1941. Immediately following the surprise attack on Pearl Harbor in Hawaii, seven Japanese submarines were patrolling the American West Coast. They sank two merchant ships and damaged six more in the west coast waters.
​By the end of December 1941, the submarines had all returned to friendly waters to resupply. However, several would pay a return visit to American waters. The Bombardment of Ellwood (Santa Barbara) during World War II was a naval attack by a Japanese submarine against United States coastal targets near Santa Barbara, California.
​
On April 17, 1942, the U.S. Navy cut short an ownership dispute of Treasure Island with the city of San Francisco by seizing the island. The Pacifica was demolished along with most other exposition structures. 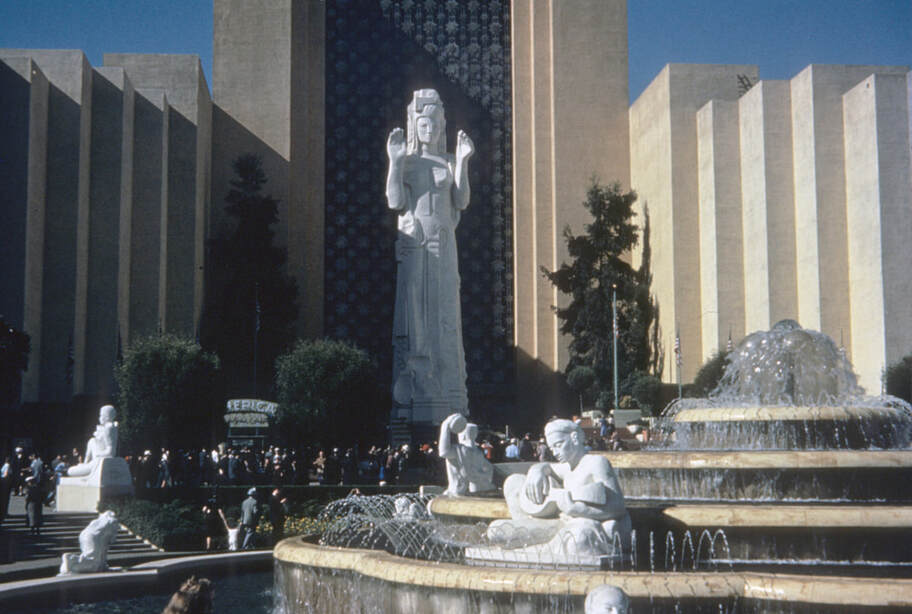