Commemoration of an American Patriot

Extract from the "Farmington News" on the unveiling of markers for the graves of William and Joseph Murphy:
"Monday was an auspicious day for the local chapter of Daughters of the American Revolution. Appropriate for Flag Day, markers were unveiled at the graves of William and Joseph Murphy, both veterans of the War for Independence. The markers had been secured from the Government and placed in position by the local D. A. R. members, and it was under their direction and provision that the ceremonies of Monday took place.
"The grave of William Murphy is located in a small family graveyard, on what is now the Jeremiah Hopkins' farm, two miles southeast of Farmington. This farm is part of the original farm of William Murphy, who came to what is now Missouri and settled in this locality at the beginning of the last century.
"A hundred or more people went out to the little graveyard Monday for the unveiling ceremonies. In the crowd were the local D. A. R. members, many descendants of William Murphy, several Civil War veterans, both of the Blue and the Gray, a squad of the local Boy Scouts, Sons of Veterans, and many others. The ceremonies began with a few introductory remarks by T. D. Fisher, who also introduced the other participants in the program. Rev. P. H. L. Cunningham, pastor of the Farmington Baptist Church, offered prayer. Little Miss Lucy and Master Joe Applegate, great-great-grandchildren of William Murphy, unveiled the marker, and the grave was decorated profusely with flowers by the children of the D. A. R. and by others present. In a very appropriate address, Congressman Walter Rensley told of the services rendered the struggling colonies in their war for independence by William Murphy and his brother, of their coming to Missouri, their settling in and near what is now Farmington, of their heroic lives and the virtues of their descendants.
"After the services at the William Murphy grave, many of those present drove to the grave of his brother, Joseph Murphy, on the Bressie farm north of Farmington, where similar services were held at the unveiling of the marker for his grave. The address at the latter place was made by G. M. Wilson, and his talk was a most excellent one. Melvin McCarthy, son of Mr. And Mrs. Chas. McCarthy, and great-great-grandson of Joseph Murphy, unveiled the marker." 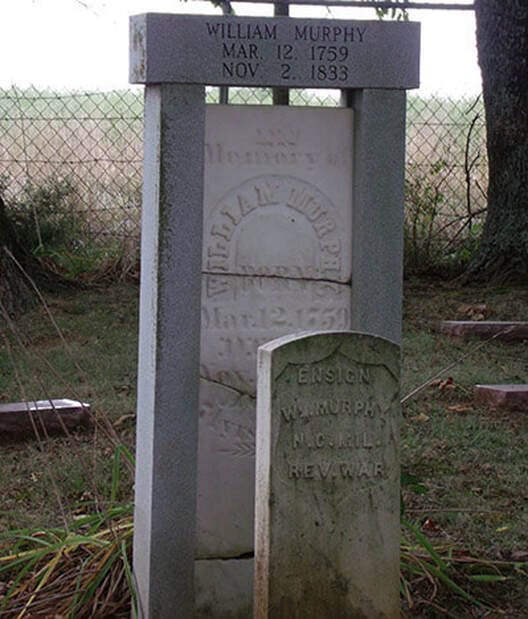