When the hundred or so English settlers sailed into the Chesapeake Bay in the spring of 1607, unknowingly they were about to encounter one of the most powerful Indian chiefdoms on the Atlantic seaboard. Powhatan, the paramount chief, or mamanatowick, ruled twenty-eight to thirty-two Algonquian-speaking groups that resided from north of the Rappahannock River to south of the James and west to the fall line. The Indians called their land Tsenacomoco and were intent on defending it.
"Powhatan men are soon moved to anger," Captain John Smith later would write, "and so militious that they seldome forget an injury. As such, they often fought to avenge slights and to earn increased personal status, creating a cycle of retribution that sometimes blurred the line between war and peace."

The new settlers had arrived near the beginning of a devastating seven-year drought (1606–1612)—the driest stretch in 770 years—that was accompanied by particularly fierce winters. Food, especially corn, was at a premium, and the colonists had come to Virginia unprepared. Supplies from England had not been adequate to keep them alive. As the English quickly died of malnutrition and disease those first two years, gifts of food from the Indians saved the colony. But the drought continued and Smith supplemented those gifts by aggressively bargaining for, and often outright stealing, corn. When Powhatan halted trade, he created a serious crisis for the Jamestown settlers.

Unable to adequately provide for themselves, the settlers pressured the Indians of Tsenacomoco for relief, which led to a series of conflicts along the James River that intensified in the autumn of 1609. As the conflicts continued, unfathomable atrocities we’re committed by both sides.
A young English colonist named Henry Spelman was just fourteen years old, when he was sent to live first with Powhatan's son Parahunt (referred to as "littel Powhatan") Spelman later lived with Powhatan himself. In November, young Spelman traveled to Jamestown with an invitation from Powhatan for the English to visit his new capital at Orapax. Instead of finding corn for trade, however, the colonists, led by Captain John Ratcliffe, walked into an ambush; about thirty-three men, or two-thirds of their number, were killed. The Indians captured Ratcliffe, and their women skinned him alive using mussel shells. (Spelman was horrified by what had happened and fled Powhatan to live among the Patawomecks 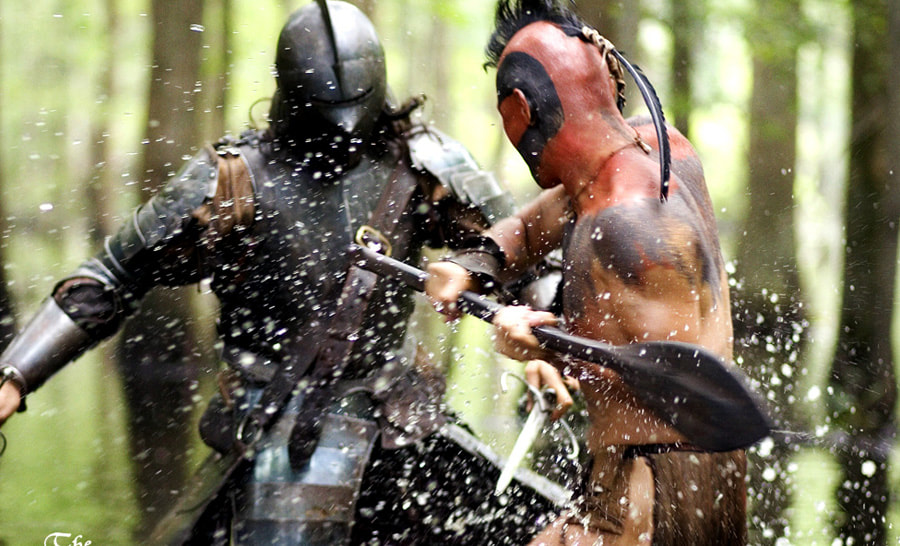 Powhatan ordered attacks on the English settlers, which lasted through the winter of 1609–1610 and precipitated the so-called Starving Time. This was the Indians' best chance to win the conflict, but the English survived with the arrival of reinforcements.

Due to the delayed arrival of the 3rd Supply Armada, the Jamestowne settlement was judged to be unviable by the Admiral of the Company, Sir George Somers. The new arrivals had calculated that the salted pork and fruit, meal cakes, etc. they brought with them would feed everyone for no longer than thirty days. It was apparent that abandonment of the settlement was their only hope fro survival. The plan was for all to board the Patience and Deliverance and sail up the coast to Newfoundland where, at this time of year, they could find fishing vessels to take them home to England.  With everyone loaded up on the 2 boats they anchored that night off an island near the mouth of the James River.

But as they waited for the tide to turn, a longboat was spotted coming towards them. It was an advance party of another expedition headed by Lord De La Warr consisting of three ships, 150 colonists and enough food to last a year. It also carried Captain George Yeardley, who was to have such an impact on the future of America.​
Lord De La Warr (Delaware) was bringing three shiploads of settlers and provisions to feed 400 for a year. The settlers from Jamestown returned to the abandoned colony and were at the gate of the fort to welcome the new governor when he dropped anchor on June 10th. One of the three ships was the "Swan" carrying a ten year old girl named Cecily who in ten years time would become Samuel Jordan's 2nd wife.

All the settlers worked to repair the colony, but there was still a critical shortage of food. Admiral Somers decided to return to Bermuda with the Patience to secure more provisions, but he died there in the summer of 1610. The Patince would not be returning to Jamestowne with fresh supplies, Somers’ nephew, Matthew, the captain of the Patience, decided to sailed back to England to claim his inheritance, rather than return to Jamestown.

After a rough start, the Third Supply would begin the first truly successful wave of colonization in the Americas. With the arrival of Lord De La Ware's ships, Jamestown now comprised of five to six hundred people who now, fully appreciated the difficulties that laid ahead of them.

Using terror tactics borrowed from their conquest of Ireland, Lord De La Ware and the newly reinforced English soldiers exacted their revenge by burning villages and towns and executed women and children. Eventually they defeated the Nansemonds and Kecoughtans at the mouth of the James and the Appamattucks near the falls. As the colonists noticed, the Indians quickly learned not to "approche scarce within musket shotte," while the colonists learned to fear ambush from the tall grass and "dyvers arrowes at randome." ​​

Within the three-sided fort erected on the banks of the James, the settlers quickly discovered that they were, first and foremost, employees of the Virginia Company of London, following instructions of the men appointed by the Company to rule them. In exchange, the laborers were armed and received clothes and food from the common store. After seven years, they were to receive land of their own. The gentlemen class, men like Samuel Jordan who provided their own armor and weapons, were to be paid in land, dividends or additional shares of stock.

The Virginia Company's Third Charter had provided only a short-term solution for the company's financial problems. The Company was permitted to run a lottery as a fundraising venture. Other attractive features of the charter allowed Virginia's assembly to act as the colony's legislature and also added 300 leagues of ocean to the colony's holdings, which would include Bermuda as part of Virginia. But, the colony remained on shaky ground until John Rolfe's successful crop experiments. Tobacco become the cash crop that provided new revenue and a way for the Virginia London Trading Company to recoup financially.
The Spaniards found the natives in the West Indies using the tobacco plant. They took seed to Europe where its use soon spread to other countries around the Mediterranean Sea. Sir Walter Raleigh is often credited with the introduction of tobacco to England. While in reality he may not have been responsible for its introduction, he did play an important role in the spread of tobacco use among the English. Spain and Portugal monopolized the European tobacco trade; England imported tobacco from Spain. The English colonists did not like the type of tobacco the Virginia Indians grew. They preferred the fragrant sort that Spanish colonists were producing in the Caribbean, which they were selling in large quantities and at high prices to London merchants. John Rolfe is credited with the experiment of planting the first tobacco seeds that he obtained from somewhere in the Caribbean, possibly from Trinidad.
​
Two years later, Captain Samuel Argall captured Powhatan's daughter Pocahontas in the spring of 1613 and turned his prisoner into the leverage necessary to make peace.
Pocahontas, daughter of Chief Powhatan, was brought to Jamestown to be traded for English prisoners and weapons that Powhatan held. The exchange never took place and Pocahontas was taken to the settlement at Henrico, where she learned English, converted to Christianity, was baptized, and was christened Rebecca.
​It was about this time that she presumably came to the attention of John Rolfe. He composed a long, laborious letter to Governor Dale asking for permission to marry Pocahontas. The letter reflected Rolfe's dilemma. The tone suggests it was intended mainly for official records, but at some points Rolfe bared his true feelings. "It is Pocahontas, to whom my hearty and best thoughts are, and have been a long time so entangled, and enthralled in so intricate a labyrinth that I can not unwind myself thereout."
In short, Rolfe, a tobacco farmer and recent widower, needed Pocahontas, the object of his obsession, for, well, sex. Chief Powhatan needed Pocahontas, his daughter, to wed this English colonist to secure Powhatan’s sovereignty over his chiefdom.​
The wedding took place in the spring of 1614. It resulted in peace with the Indians long enough for the settlers to develop and expand their colony and plant themselves permanently in the new land.
Proudly powered by Weebly