Moving to Warren County, Illinois
Veterans of the War of 1812 begin receiving 160-acre land warrants in the Illinois Military Tract, a region between the Illinois and Mississippi rivers, in 1829, when the Chippewa, Ottawa, and Potawatomi ceded lands in northern Illinois by treaty at Prairie du Chien.

The Davidson, Murphy, Butler and Lucas families had left Kentucky for newly opened lands now promised to the veterans of Kentucky militia at the Battle of New Orleans, and to escape their growing struggles with Kentucky imposing new laws threatening abolitionists with heavy fines or jail time for helping any runaways escape slavery. The women had extracted from their men a promise that a school and a church would be established before they had consented to go. The new school would be patterned after Bethany College in Virginia (later West Virginia), which was founded by Alexander Campbell, founder of the. Disciples of Christ (Christian now) church.

In 1829, Elijah and family leave Kentucky for the newly opened lands of western Illinois. That autumn, Elijah Davidson, William Whitman, Peter Butler build their homes on the south side of Cedar creek. By this time the entire territory comprised in Warren, Henderson and Merger counties contained only thirty families (half of them related) but others were constantly coming, so that by the the following spring it was thought proper amount of residents to send to Peoria and secure an order for a county election. Within one year, census shows 830 persons residing in the three counties. Elijah Davidson builds one of the first four cabins built in Monmouth. He owned a cabin and a blacksmith shop.

On the 30th day of April, Elijah Davidson is appointed to be pastor of the Christian Church establish at Cold Brook, east of Monmouth. The Cold Brook congregation calls itself "the church of Christ on Cedar Fork of Henderson River. The first group met originally in members' houses, the courthouse, and a hallway of a downtown building.  Elijah also served as the County Treasurer.

The spring of 1832 came rather late, and the weather was still very cold, and like the previous spring, little corn came up. The settlers had taken the precaution, however, to procure a species of Indian maize,  which matured much earlier than the common variety, and so that season a very good crop was raised.

The National Road, that was begun in 1811, was a highway had now reached Vandalia, Illinois. It had become an important linkage between the original 13 states and the new states created in the Louisiana and Northwest Territories, in the wake of the Treaty of Ghent and the Adams-Onis Treaty. These treaties and the subsequent National Road "aided the white settlers and brought misery to the Indians"  which unfortunately brought about Black Hawk’s War.
The Louisiana Purchase and Adams-Onis Treaty had removed Spain's protection away from Indians, and then the consequences of the War of 1812 removed British protection from the ever expanding incursions of white settlers. As the white population of the region grew so did the tensions with the Native American population. Chief Black Hawk leads a group of Native Americans back east across the Mississippi River to reclaim land previously ceded to the US Government.

That spring of 1832, Monmouth’s crops were barely planted, when the news arrived of an Indian war, less than 60 miles away. Black Hawk and his band were on the warpath and Black Hawk's band had defeated a local militia at the Battle of Stillman's Run. Elijah Davidson Jr. joins the Illinois volunteer militia to fight in the Black Hawk War, as does another young man named Abe Lincoln.
BLACK HAWK'S WAR
By the year of 1832 the treaty with the Indians of the area supposedly made it safe to establish settlements, the area saw an influx of white settlers.
This no doubt offered a promising field for "spreading the gospel." A letter written by Downing Baugh.
“Beloved Children —Through the tender mercies of our God we are all in good health -1 have just returned from a tour of preaching on the east side of the Mississippi, and have agreed to go over again on the first Saturday in May next to form a church.
This meeting will be held at the house of a Mr. Bean whose son is now in your town.
Tell brother Chaffin for me, if he wants to glorify God and benefit mankind (of which I have no doubt) to get on his horse the first of April and preach all the way through Illinois, and meet me at the above place. Tell him if he comes to call on Elijah Davidson in Warren County, that county is filled with disciples. I will instruct brother Davidson, in case he would call on them, to assist him on his way, and I will do all in my power to have him assisted here.
I have a better opinion of brother Chaffin than to think money is his object, but I know he cannot live on the wind. The church in brother Davidson's neighborhood has sent me a special request to come and live with them, and they will reward me handsomely, but I cannot think of leaving the brethren here without a shepherd…”

The establishment of Monmouth as the seat of Warren County in 1831 led to the building of the town's first house by Daniel McNeil. Both Abraham Lincoln and Stephen A, Douglas were entertained there at different times. Joel Hargrove, Elijah Davidson and Gen. James McCallon built log houses in Monmouth in the summer of 1832. Hargrove's was on the northwest comer of East Broadway and Second Street; Elijah Davidson put up a cabin and blacksmith shop on the west side of South Main Street between the town square and West First Avenue, and Gen. McCallon built on the next block south.
By 1833, when Monmouth was 2 years old, there were seven families living here in seven houses, three or four stores, the log courthouse, the jail, and Garrison's Inn was erected on West Broadway at South A Street.

1839    On March 31, twenty-two persons out of the Church of Christ of Savannah, Illinois, (later known as Coldbrook) were given a letter to begin a congregation in the city of Monmouth, Illinois.  The first group met originally in members' houses, the courthouse, and a hallway of a downtown building.

1841    On June 16, Elijah Davidson deeded land on the southwest corner of East Archer and North Second Streets to the church of Christ. A frame building was erected for $800.
The Talbot Creek Church ​was formed in the northeast corner of Monmouth Township at the home of William Hopper, March 3, of forty-three members, most of whom were of the mother congregation and five miles northeast of it. Some of the ministers who resided near the Talbot Creek congregation and were members of it were S. L. and Thomas Wallace, John E. and Joseph E. Murphy and F. M. Bruner. In 1845 the congregation built a small frame chapel.​

1847   The men and women of the church of Christ in Monmouth, Ill., begin meeting with the purpose to establish a learning institution in the Oregon Territory "where men and women, alike, may become schooled in the science of living and in the fundamental principles of religion." Some of the women, now nicely settled in their new homes after the migration from Kentucky several years earlier, were not sure they wanted to make another move so soon. 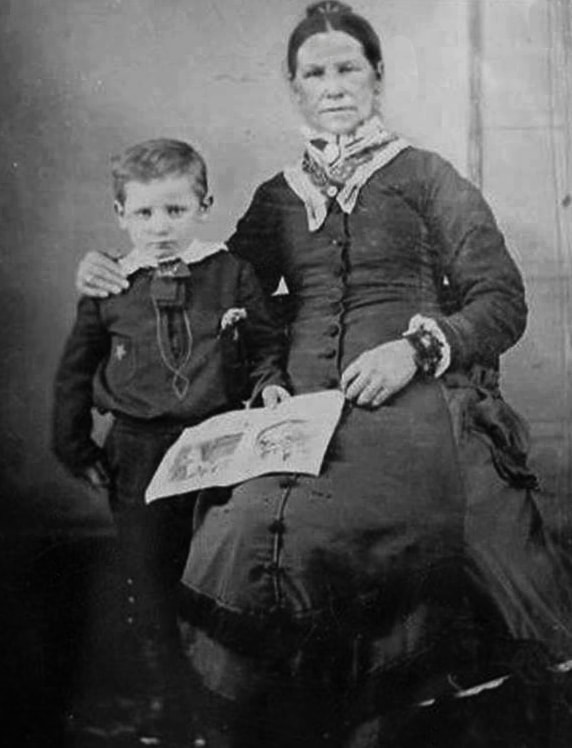 Virginia Ann Cooksey sits posed with her young son, Wyatt Earp (1856).
An article in the Monmouth Atlas newspaper recorded:
"In the early spring of 1850, the Monmouth Town Square was a scene of an amazing gathering, when families from Monmouth and Cameron assembled there to pray and say goodbye to the group heading out to Oregon that would eventually found Monmouth College. The plans for the trip were made as long ago as 1846. Many meetings were held during the period from 1846 to 1850, most of them at the home of  Elijah Davidson where the "Oregon Fever" reached a high peak."

The Oregon Trail is nearly 2,000 miles of plains, deserts, canyons, and mountains, considered so unfamiliar and inhospitable that it was dangerous to even pause, and unthinkable to settle. It would be a six month journey which had to begin in early spring in order to avoid being trapped by mountain snow storms. The travelers considered Independence Rock as being the halfway point to Oregon. If Independence Rock was reached by July 4th, chances were good that the wayfaring pilgrims could reach the Oregon Country before the snow fall. Elijah Davidson, Squire S. Whitman, Thomas Lucas and others, with their wives and children, would travel to Oregon in 1850, and the others will followed in 1852 and 1853.

Quote from The Monmouth Atlas, printed April 5, 1850: “On Friday last, ten teams taking with them 39 persons left for Oregon. Elijah Davidson, 67 years and an early settler of this county was with them. He was a pioneer here from Kentucky and now takes family, including numerous grandchildren and is bound for the Pacific.
The teams of William Mason and Carter T. Davidson had come to town and then started the trip. Mason had four teams and 14 persons, and Davidson had three teams and 15 persons. It added that the teams of Mason and Elijah Davidson Sr. and of John E. Murphy were decidedly the best who have gone from this part of the country. Their oxen and horses were in the best of shape and harnesses were new and fitted up expressly for the occasion."
​
They expected the trip could be completed in five months.