By the year 1616, the Virginia London Trading Company suffered further adversity. The original settlers (like Samuel Jordan) were due their land and stock shares, and the initial investors back home were owed their dividends. The Company was cash poor, and was forced to renege on its cash promises, so therefore, it began distributing 50-acre lots in lieu of cash payments - much to the dismay of the Indians.

Samuel Jordan was initially given 400 hundred acres for his services to the company, located 20 miles up river from the Jamestown fort. He would eventually acquire over a 1000 acres growing tobacco in 3 different locations along the James River. 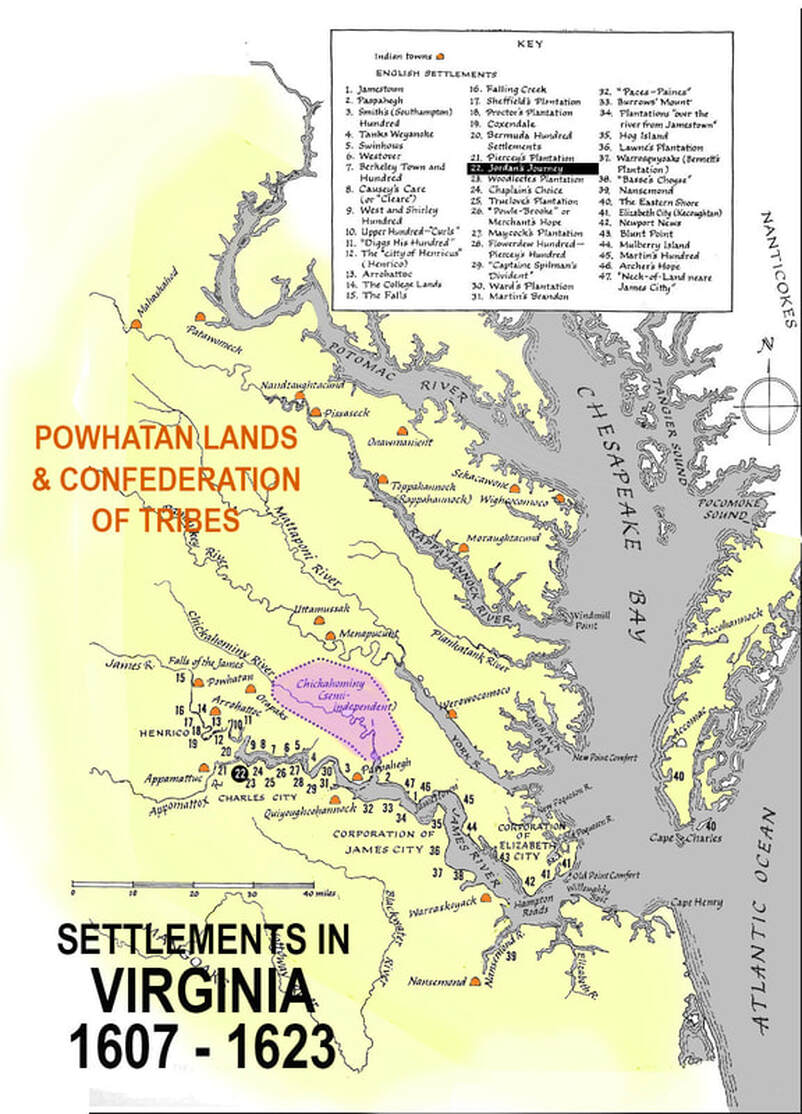 In 1618, Samuel was also one of 8 men appointed to review the four new books of laws sent to Virginia by the Virginia Company.

Samuel Jordan, was given the title "An Ancient Planter" of Virginia due to his early arrival to the New World. He established himself in Charles City County with a plantation known as Jordan's Journey on the southern banks of the James River at the at the confluence of the James and Appomattox Rivers known today as Jordan’s Point. He called his home Beggar's Bush. Beggar's Bush may have been named for the play by Beaumont & Fletcher, but more likely is from common Elizabethan English use of the term, meaning "poverty, often caused by the person's own folly."

One of Sir George Yeardley's first acts as Governor was granting the patent of land at James City, on Dec. 10, 1620, to Samuel Jourdan of Charles City in Virginia, as an ancient planter "who hath abode ten years Compleat in the Colony" and to "Cecily his wife an ancient planter also of nine years continuance."
Abstract of the patent reads: "Give and grant to Samuel Jordan of Charles City in Virga. Gent. an ancient planter who hath abode ten yeares compleat in the Colony . . . for part of his first general divident to be augmented, etc. 450 acres in his own personall right and in the personall claim of Cecily his wife, an ancient planter also of nine years continuance, 100 acres more, and the other 250 acs in recompense for transporting out of England at his own charge five servants . . . and maketh choice in severall places; one house and 50 acs called _____ilies (believed to be "Bailies") Point in Charles Hundred, bordering E upon the great river, W upon the main land, S upon John Rolfe & N upon Capt. John Wardeefe (Woodliffe). Secondly in ye hundred land mentioned an tenement containing 12 acs, which abuts north upon the great river, east upon a swamp and west is encompassed by Martin's Hope now in the tenure of Capt. John Martin, Master of ye Ordinance; and thirdly, 388 acs, bordering ye remainder of ye said 450 acs, in or near upon Sandy's hundred, bordering towards ye east upon ye land of Temperance Baley, west upon ye main lands. Dated Sept. 10, 1620. 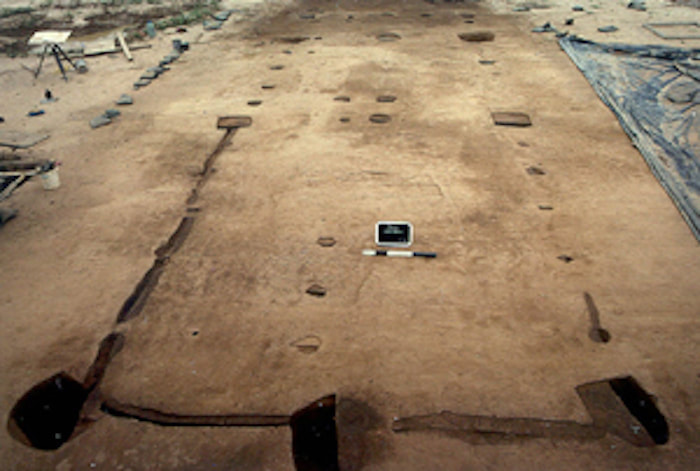 Samuel Jordan's property wasn't known by the name Jordan's Journey until near the time of or shortly after his death. 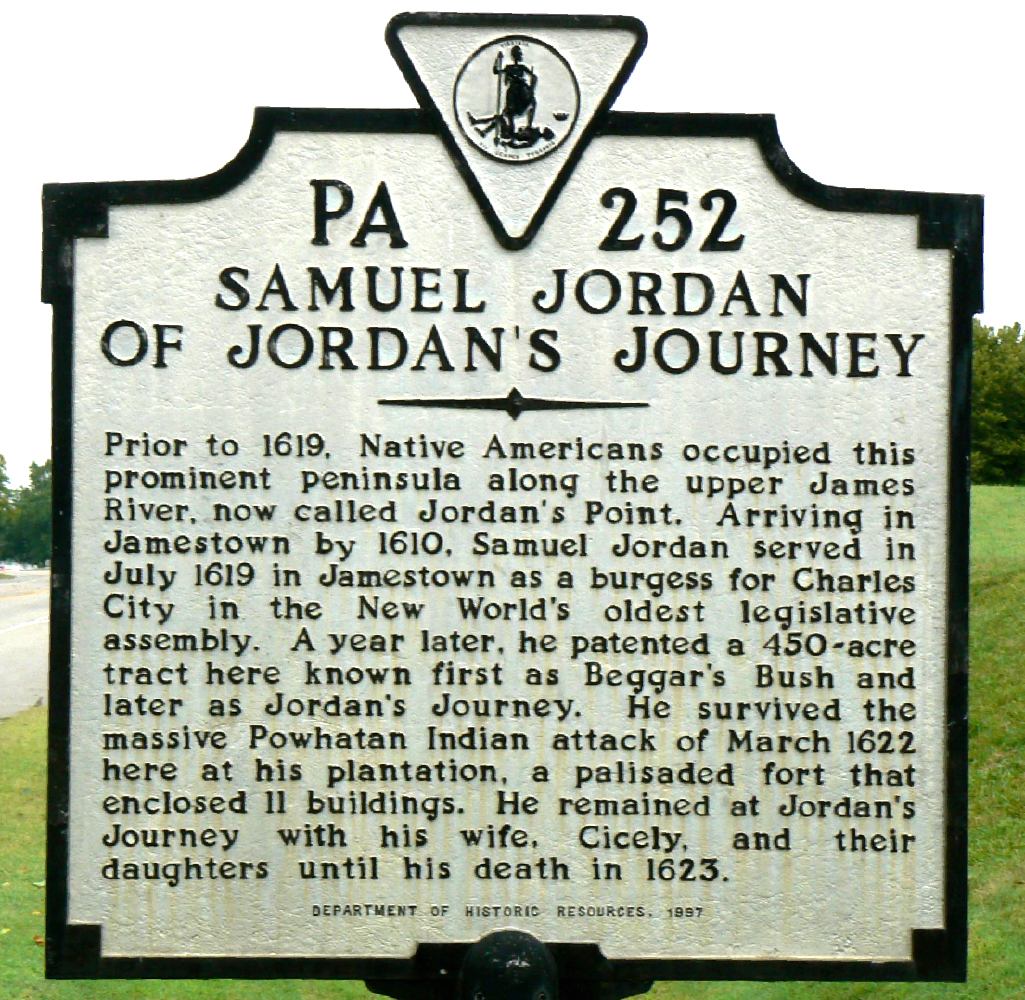 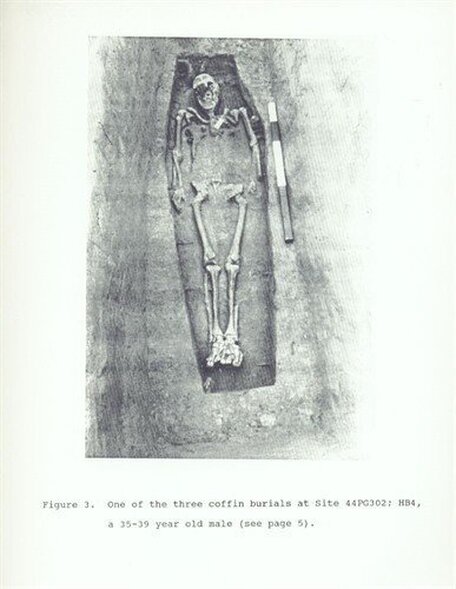