Turning the World Upside Down

A Generation That Turned the World Upside Down.
William and John Murphy, sons of William Murphy, (“the Murphy Boys)
Philip Mulkey (married Mary Ellis, kin to William Ellis, Alexander Davidson’s guardian)
Rev. Issac Barton (father of Sarah Barton Murphy – wife to William Murphy)
Rev. William Cook (father of Rachel Cook, wife to John Murphy, parents of Margaret Murphy who married Elijah Barton Davidson)
“William Murphy was of small stature, had a very expressive and penetrating eye, and a voice singularly harmonious; his enemies, it is said, were sometimes captivated by his musical voice. Many things are related of the enchanting sound of his voice, and the glance of his eyes, which had a meaning in every movement.”

Murphy History - The “Greatest Baptist Preachers of Their Day”
Joseph and William were known as the “Greatest Baptist preachers that ever was known in Virginia of their Day”, they were called the “Murphy Boys” as they were so young and very eminent. Both William and Joseph were converted as youths, trained for the ministry under Shubal Stearns, and became active ministers of the Gospel. Working throughout Virginia, North Carolina and South Carolina they help establish over 30 congregations. Many of these churches were considered outlawed by the British crown. William Murphy and his brother Joseph Murphy were "dissenters." They left the established Anglican church, and joined the Separatist Baptist Church.
The revolt of the Dissenters against the Established church was a part of the broader revolt that was in the making, as a result of the Regulator troubles and of the Colony against the political and governmental domination of Great Britain. It was a part of the great Revolutionary movement which resulted in the War of Independence.
​
Samuel Harris
They lead to Christ one of Virginia’s most celebrated Baptist ministers, Harris was born in Hanover County in 1724 and as a boy moved with his parents to Pittsylvania County where he rose to political and military prominence. Around 1757, on one of his military rounds, he came to a house near Allen Creek where people were assembling. “What is to be done here, gentlemen?” he asked. “Preaching, Colonel,” he was told. When he asked “Who is to preach?” they said “The Murphy boys, sir.” Harris stayed to listen and they said afterwards he cast aside his sword and military insignia. Baptized the next year, Harris devoted the rest of his life to the Baptist ministry.
Many Baptist preachers, including Samuel Harris, John Waller, Elijah Craig, and others, were imprisoned or harmed bodily by the officials of Virginia, where the state church was Episcopal. Baptists in Virginia refused to accept licenses to preach from the Episcopal government.  Patrick Henry rode 60 miles to defend Lewis and Joseph Craig and Aaron Bledsoe, who were imprisoned for preaching without a license. 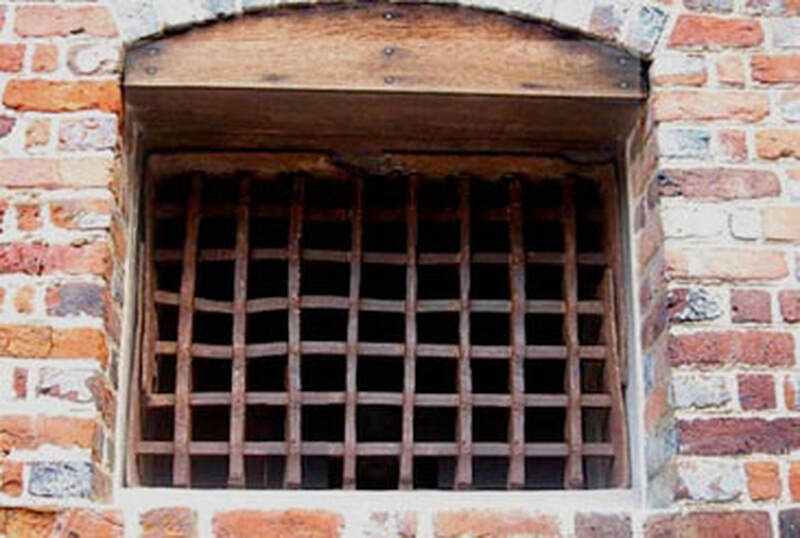 Elijah Craig was imprisoned in Orange County, VA in 1768 but simply kept preaching out through the bars of his cell, attracting large crowds. James Madison, then a boy, and his father heard imprisoned Baptists preaching from the jail windows. By his own admission Madison was moved by hearing Elijah Craig, became a proponent of religious liberty, and later introduced the Bill of Rights.  The First Amendment prohibited Congress from establishing an official state church.

Anglican Church Taxes, Government, and Administration in Virginia
Priests always accompanied the earliest and most important voyages to the new world, and formally consecrated the earliest landings on the James River with their prayers. From the very beginning among the first buildings at Jamestown, one would be consecrated for the services of the church.
The most zealous designs of the early Colonial Assembly for more than a century after the first settlement was to cement the union between the government and the church, and to make the claims and officers of the latter as binding as possible upon the people.
The legalized Anglican church had the authority to set forth laws to guide individual behaviors and aligned all future progress and colony development with the prevailing conditions and desires of the reigning power.
Other religious opinions began to creep in; Like all non-Anglicans, they were expected to practice their religion discreetly, if at all.
• Every colonial household was required to pay a tax, known as a tithe, to the local Anglican parish, regardless of its personal religious conviction. Funds brought in by this taxation were used to pay the minister, maintain the physical state of the church building, and cover other expenses accrued by the parish.
• Tithing required the yearly donation of ten percent of one's annual income to the local parish, regardless of whether one was Anglican or not.
• Tithes, or taxing parishioners, began tithing at the age of sixteen. All free, indentured, and enslaved men were considered tithable beginning at this age, as were all free and enslaved black women. White women did not tithe unless they were heads of their own households or owned and operated their own businesses. For the farm family, one hundred pounds of tobacco, a tenth of their cash crop, would go to pay their tithe.
• Church officials could also imposed disciplinary action on their parishioners when necessary. Swearing, blasphemy, adultery, and absence from worship on Sundays were among the most common violations. Usually the punishment for these crimes was in the form of a fine, but repeated offenses could result in public humiliation such as a day in the stocks or whipping.
• All were required by law to attend Sunday services at least once every four weeks. The penalty was in the form of a fine of either five shillings or fifty pounds of tobacco. However, it was not always possible for many to attend even the mandatory services. For the "farm family," with its daily chores and the overall rigor of farm life, would not have found this feasible. Moreover, weather and conditions of roads were yet another factor affecting church attendance.
• Roads in the colony often consisted of little more than simple dirt paths, and for the "farm family" and others, travel to church on foot or wagon would have taken a considerable amount of time.
• Records reveal during the 1760s, the Fairfax Parish Minister Townsend Dade was paid a salary of 17,280 pounds of tobacco, which was used as currency or redeemed for transferable tobacco notes

1758 - William Murphy worked with Phillp Mulkey to establish many churches together, one of them was the Bluestone church situated on the plantation of William Byrd III in Virginia, near Mecklenburg, becoming the first known all black church in North America. It was scattered a year later when the land of the Byrd Plantation was sold to pay off his gambling debts.  The Baptist movement had emerged from the lower economic and rural classes and from Blacks, both free and slave. Up until this time, Blacks could only worship within integrated congregations under the authority of white leadership.

The Separation of Church and State
John Leland had come from western Massachusetts, and was ordained in 1777.  He knew the “Murphy Boys”, Elijah Craig and John Waller and Samuel Harris and was a neighbor of James Madison in Orange County.  Madison, more than any other man, was responsible for the Constitution. The Baptists of Virginia, including Leland, were opposed to ratification of the Constitution without a Bill of Rights which would specifically limit the powers of the central government.  Leland was a candidate from Orange county for election to the state convention which would debate and vote on ratification.  If he had been elected, and it appeared that he would be, he and Patrick Henry, who was also opposed, might have prevented ratification by Virginia.  This would have had serious consequences for the formation of a stable and lasting central U. S. government, which would have been so disjointed without Virginia that there would have been no union.  Many of the first and greatest leaders of the country, Washington, Jefferson, Madison, Patrick Henry, and George Mason, were from Virginia.  Jefferson was the author of the Virginia Statute for Religious Liberty.
​
In March 1788, James Madison received a letter from Joseph Spencer telling him that Leland was likely to win election as a delegate from Orange County.  He asked Madison to visit Leland and the other ministers to discuss the election.  Madison came to John Leland's home on the eve of the election, and Leland obtained a promise from Madison that a Bill of Rights, including the first amendment which prevented the establishment of an official state church in this country, would be introduced in the First Congress.  Leland was satisfied and reassured and so withdrew from the election and advised his Baptist constituents in Orange County to vote for Madison. Madison won the election from Orange County.  Two delegates from each county were chosen for the state convention.  The convention ratified the constitution by 187 to 168, a thin margin of 19 votes out of 355 cast.  If Leland had been there with Patrick Henry to argue against ratification the vote would have gone the other way.