The Great War Part One
​A stable world order is a rare thing​.

One could make the case that the single most important individual in last one hundred years, is a name that very few people would ever recognize.
No one could have ever imagine the ramifications that ignited a great convulsion of humanity and brought an abrupt end to the centuries way of life, World War One.
The after effects would be:
Imperialism depended on a self-belief of predestination. The Latin phrase “mutatis mutandis”, meaning "having changed what needs to be changed”, was the justification for empire expansion and conquests, necessary for growth that modern European imperialists – i.e., the Spanish, the British, the French, Germans and even the Dutch like to deploy at their convenience.
Yet there was a catch. No people in antiquity would have ever succeeded in winning as an empire had they doubted their license to conquer and enslave the vanquished.
By 1900, these Western European nations had control over most of the globe. Europeans were convinced that they had superior cultures and father duty to the people of the vanquished nations to accept their modern or Western ways. 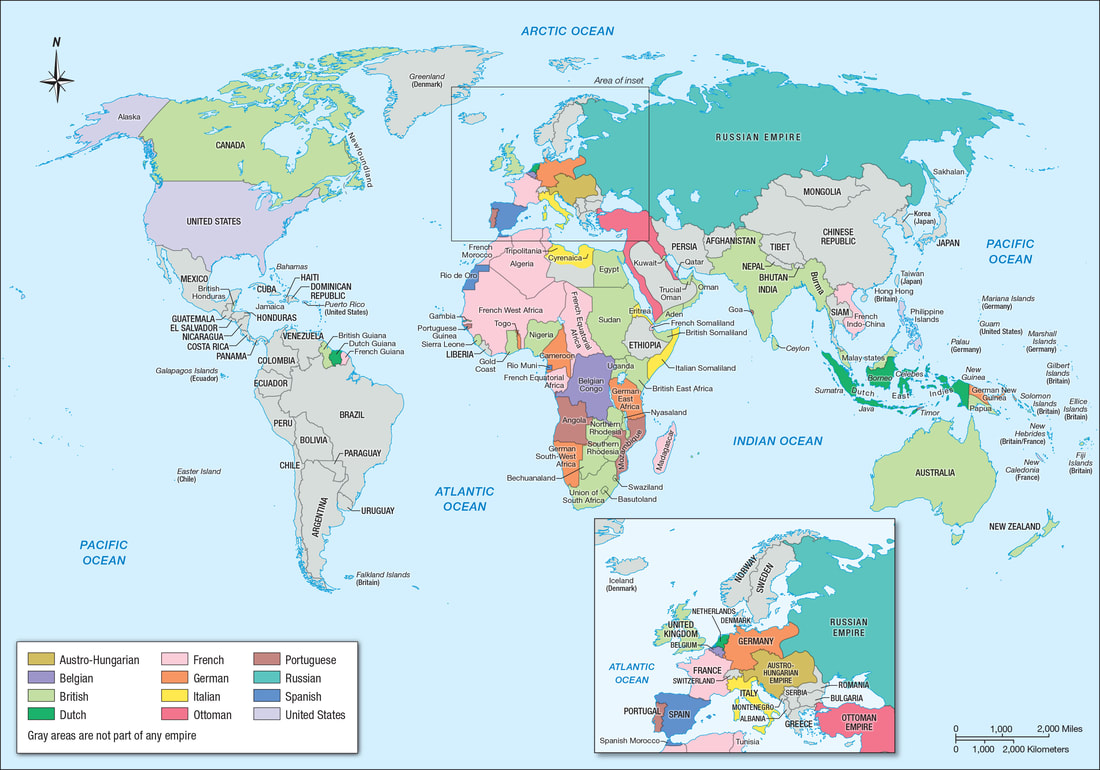 The old Imperialist’s world order of Kings, Queens, Tsars, Monarchs, Princes, and Grand Dukes all accompanied by their ministers would be horrified, at the thought that their decisions to fight World War I, fought between July 1914 and November 11, 1918.would kill over 17 million people - including over 100,000 American troops.

All of this was ignited with a solitary individual’s act of terrorism. Even if the demise of the old-world order was inevitable, the timing and the manner of its ending the colonial/empire ways was not. Nor what came, in its wake.  They believed that world orders tend to expire in a prolonged deterioration, never in a sudden collapse.

The social and financial shockwaves WWI sent through international society, may have begun as a clash of empires, a classic great power war, but it ended as something far more had charged — a victory for a new coalition that proclaimed itself the champion of the New World Order. The lead actor of that new world order was the United States.
The old powers of Europe and the rising powers in Asia and Eastern Europe was something they’d never imagined. A new world class of power in which economics was the pre-eminent medium of power, with its military force essentially as their primary by-product.
Governments in the 1920s again and again found themselves confronting the painful fact that the United States was a power unlike any other. It had emerged, quite suddenly, as a novel kind of ‘super-state,’  that will exercise a veto power over the financial and security concerns of the other major states of the world. By offering gigantic war-bond loans, President Wilson had saved Britain, France and Italy from being driven to bankruptcy by their crippling wartime expenditures; in exchange, through the leverage of onerous repayment schedules, America increasingly exorcised its influence far beyond mere debt-collecting. Countries complaining about the severity of their repayment installments, for instance, could be patronizingly “advised” to cut back the amounts they were spending on armaments or imperial adventures. Henceforth, down to the beginning of the 21st century, American economic might would be the decisive factor in the shaping of the world to come.

So, how could an unknown nobody, a person of so little achievement, be perhaps credited with creating cataclysmic change with one single act, and on that one day, would send a tsunami of rippling effects throughout entire world, for the next 100 years. 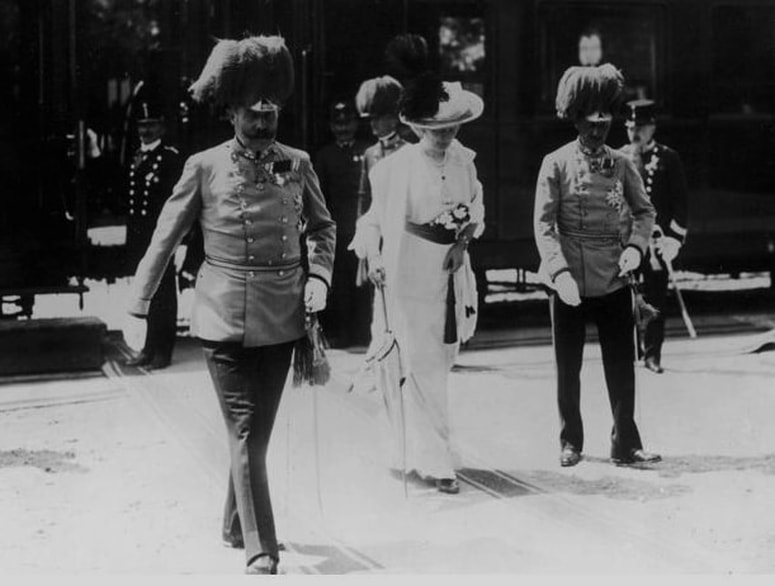 Duke and wife - arrive in Sarajevo 1914
How was that even possible?
Popular surges of nationalism, new demands for a representative, democratic participation, and the growing threat of Bolshevik influence, was threatening the old world regimes’ status quo of the monarchies within nearly every country. At the same time, new forms of transportation, communication, and armaments was transforming politics, economics, and warfare. These conditions all contributed to the uneasiness facing the Old World colonial hierarchies.

“Bolshevism” became a major organization by 1905. Supporters of the party were mostly workers who believed in a controlled centralism, (party’s central committee) and saw themselves as the leaders of uniting a revolution for the world working class. Bolshevism was radically alien to European class status and politics, it’s pathology was born out of Russian barbarism, bound to terror and authoritarianism, considered a threat to Western civilization, long before the outbreak of World War I. A ideology that was generating a fear of a far-reaching social upheaval, in which time flowed backward - even as it marched inexorably forward toward a future that was radically unknown and worrisome. This rise of the workers’ movement was punctuated by frequent brutalization and defeat at the hands of states that would later hold themselves up as the champions of liberal democracy. In a sweeping clash and collision, at the epic-center was  the intersection of rising working-class internationalism, world socialism, and European imperialism.
To the eastern European working class peasants, even though they may have been freed from serfdom just a few decades before, was nearly a century late by the Western European counterparts. That freedom was largely illusory, as it still kept peasants legally bound to large estates. In place of a restive industrial proletariat, Tsarist Russia had a long tradition of suppressing peasant revolt with violence. After abortive attempts to incite the peasantry to revolution, the radical revolutionary intelligentsia came to place its hopes for a more open society, in the theatrical acts of terrorism, such as the assassination of Tsar Alexander II in 1881. A failed attempt on his successor in 1887. Russia’s working class, despite its close links with the peasantry, was exceptionally militant and revolutionary, lighting the pathway for action for the Serbian nationalists.

Pope Leo XIII (b. 1810, elected pope in 1878; died 1903) believed the Catholic Church was the ultimate and timely solution for “a perfect society,” and the Vatican was to be the living embodiment of that perfection. In his vision, the papacy would not only exert spiritual sovereignty over the religious lives of all Catholics but also control Church activities in every nation and would help stem the rising tide of Bolshevism, with the licensing of the government’s schools with the appointment of bishops. Such a vision required nation-states to regulate such matters to the Church through the Vatican rather than through local institutions.
Pope Leo XIII died in 1903, and was succeeded by Pius X, whom no one would mistake for a liberal, was famous for his condemnation of “new world modernism”. Pius X continued the program of centralizing Church authority in an absolutist papacy. Two strategies served him well in this. One was the Oath Against Modernism, which every candidate for ordination in the world was thenceforth required to swear (still in forced in the late 1960s), and the other was a new Code of Canon Law, which would give the Pope unprecedented power over every aspect of Church life.
Enter a young lawyer named Eugenio Pacelli (who became Pope Pius XII in 1939), was one of two Vatican priests who spent more than a decade developing the new code, which was finally promulgated in 1917. Canon 218, defines the Pope’s authority as “the supreme and most complete jurisdiction throughout the Church, both in matters of faith and morals and in those that affect discipline and Church government throughout the world.”
In European governments, the structures of Church and State were traditionally intermingled fro centuries, with a lot of overlap of political and religious authority. The implementation of this new Code of Canon Law required the cooperation of governments, which led to Pacelli’s next assignment. The task of negotiating treaties or concordats—these recognized the freshly claimed prerogatives of the papacy fell to him. His first success, concluded in 1914, before the code was formally published, was in Serbia, where he negotiated a concordat that served the Pope's purposes but undercut the Catholic hierarchy in Austria. The treaty implied the repudiations of the ancient protectorate rights of the Austro-Hungarian Empire over the Catholic enclave in Serbian territory. This change in Church-State relations effectively supported Serbia’s political effort to liberate itself from Austrian dominance, and as such gave Serbia much-needed international prestige, whether the Vatican intended it or not.  The concordat was signed on June 24, 1914. Four days later Archduke Franz Ferdinand, of Austria, was assassinated by an independence-minded Serb in Sarajevo. The emotions prompted by the Serbian Concordat became part of the general groundswell of anti-Serbian anger in Austria/Hungary. The Austrian government blamed the Serbian government for encouraging the assassination of Franz Ferdinand and his wife and declared war on Serbia.

The assassination of Archduke Franz Ferdinand of Austria, heir presumptive to the throne of Austria-Hungary, and his wife Sophie, Duchess of Hohenberg, happened on 28 June 1914 in Sarajevo. They were shot dead by Gavrilo Princip, a Serb nationalist, and a member of a Serbian nationalist terrorist group known as the “Black Hand”. His political motivation for the assassination was the liberation Austria-Hungary's South Slav provinces so they could be combined into a new country, Yugoslavia.
Gavrilo Princip wasn't trying in unleash a global world war, he just became latest example of another revolutionary angst pulling the trigger at the skull of an old-world noble aristocrat.
He shot a bullet into a brain that perhaps he and his compatriots believed needed to be done. HJowever, the growing influence of Bolshevism revolutionaries coming out of Russia during a time of renewed Serbia nationalism, the hierarchies steeped in that old world order we're not naive about the potential of someone like a Gavrilo Principof could do.

“One day a great European War will come out of some damned foolish thing in the Balkans (1888).”
― Otto von Bismarck

The claim that this was the “war to end all wars” was meant to be an exclamation point, with a recognition that the old order was never coming back and that any efforts to resurrect it will be in vain. But with any ending, acceptance must come before one can move on.

Up to this point, countries throughout Europe had made mutual defense agreements that would pull them into war. These treaties meant that if one country was attacked, allied countries were bound to defend them. At the onset of World War 1, the following alliances existed:
Russia and Serbia
Germany and Austria-Hungary
France and Russia
Britain and France and Belgium
Japan and Britain

By 1914, Germany had the greatest increase in military buildup. Great Britain and Germany both greatly increased their navies in this time period. Further, in Germany and Russia particularly, the military establishment began to have a greater influence on public policy. This increase in militarism helped push these countries into war
As Austria-Hungary declared war on Serbia, Russia got involved to defend Serbia. Germany seeing Russia mobilizing, declared war on Russia. France was then drawn in against Germany and Austria-Hungary. Germany attacked France through Belgium pulling Britain into war. Then Japan entered the war. Later, Italy and the United States would enter on the side of the allies.

The first month of combat consisted of bold attacks and rapid troop movements on both fronts. In the west, Germany attacked first Belgium and then France. In the east, Russia attacked both Germany and Austria-Hungary. In the south, Austria-Hungary attacked Serbia. Following the Battle of the Marne (September 5–9, 1914), the western front became entrenched in central France and remained that way for the rest of the war.
Meanwhile half a world away, on the far side of the ocean young American boys have anything but fighting in a war on the battlefields of Europe on their minds.

When the U.S. joins the battle and the war -- the world changed forever. 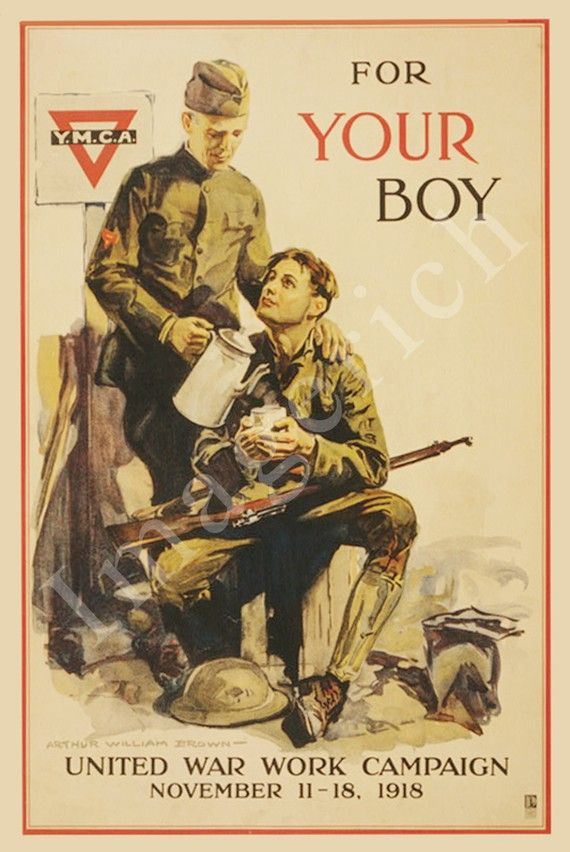