When James VI of Scotland reached his majority in October 1579, following celebrations in Edinburgh, Regent Morton entertained the young King at Dalkeith Palace.
In September 1579, Esmé Stewart, Sieur d'Aubigny, the king's cousin, came to Scotland from France, gained the favor of James by his courtly manners, and received the lands and earldom of Lennox, the custody of Dumbarton Castle, and the office of chamberlain. The young James VI was declared to have reached his majority and formally began his personal rule with some ceremony in Edinburgh in September 1579, and the period of the Regents was concluded.
​
On 31 December 1580, an associate of Lennox, James Stuart, Earl of Arran, son of Lord Ochiltree and brother-in-law of John Knox, had the daring to accuse Regent Morton at a meeting of the council in Holyrood, of complicity in the murder of Darnley, and he was at once committed to custody in Holyroodhouse and taken to Dumbarton Castle in the Lennox’s heartland.  Some months later Morton was condemned by an assize for having taken part in Darnley's murder, and the verdict was justified by his confession that the Earl of Bothwell had revealed to him the design, although he denied participation, "art and part", of its execution.​

James Melville tells us that the fallen Regent before his execution was visited by Johne Davidson and from whom he craved pardons for his harsh treatment of him, the man for his preaching, the other for his book against the four Kirks. The affecting scene is also described by Hume of Godscroft who adds that, at the meeting Morton, the condemned man took Davidson in his arms and said “Yee wrote a little booke indeid but truelie I meant never evill towards you in my pairt forgive yee me and I forgive you.” Davidson, was moved to tears.​
Morton was executed on 2 June 1581. The method of his execution was the Maiden, an early form of guillotine modeled on the Halifax gibbet. According to tradition, Morton brought it personally from England, having been "impressed by its clean work",
His corpse remained on the scaffold for the following day, until it was taken for burial in an unmarked grave at Greyfriars Kirkyard. His head, however, remained on "the prick on the highest stone”, (a spike) on the north gable of the ancient Tolbooth of Edinburgh (outside St Giles Cathedral), for eighteen months until it was ordered to be reunited with his body in December 1582.​
Johne was appointed one of the commissioners to examine into accusations made against certain ministers said to be leading scandalous lives.  The following year he was presented to King James, who had now assumed the reins of government, and so we have the first of many interviews which the minister was to have with the monarch.
The King was still largely at the mercy of whatever party for the time being prevailed. Lennox and Arran' had now been reconciled after a period of enmity and their joint influence on James was bad both for him and the cause of the Reformation.
The country was in a very unsettled state with the Guises and the Papists busy for their own ends even at court, and with a design on foot to get the young king to resign the crown to his mother and have it back from her with her consent and blessing.
Had such a scheme matured, it would have meant the nullifying of the parliamentary ratification of the Reformation and the wiping out of all that the Reformers had contended for and won. A conversation between certain ministers, of whom Davidson was one, and the Earl of Argyle and Lord Ruthven, regarding the dangers of the time and the folly of leaving the King at Dalkeith with no company save a stranger suspect of Popery, evidently spurred Mr. Johne to action.

Perplexed over the awful national confusion, Johne obtained access to his Majesty and delivered his soul on the matter. In a speech singular for its choice of language as well as its perfect frankness, he entreated the monarch to deal decisively with the troublers of the nation. ​ After the death of James Boyd, titular archbishop of Glasgow in 1581, the Earl of Lennox had obtained disposal of the see and from it he was resolved to enrich himself. He had considerable difficulty in finding a minister who would accept the office on his conditions, but at length Mr. Robert Montgomery of Stirling agreed to do so. It soon transpired that Montgomery was to hand over the revenues to the Duke on the promise of an annual pension equal to one-fourth of the whole.​  The arrangement as a vile bargain"' and so it was both In respect of its simony and because it set Church and government in sharp opposition.
In April, 1581, Johne Davidson was appointed by the Kirk’s General Assembly as one of the commissioners to examine into the conduct of certain ministers accused of leading corrupted and scandalous lives.  In October 1581, the matter was brought before the Assembly, which censured Montgomery for accepting the appointment and interdicted him from undertaking it. The King and Council took up his defenSe and James intimated to the Assembly that, while he had no objection to their proceeding against Montgomery for faults of life or doctrine, he could not permit them to prosecute him on account of the bishopric. ​
In February, 1582 he was presented to James VI, who had recently entered on his regal functions. On the occasion he availed himself to entreat the monarch to repel the enemies of religion as keenly as if they were enemies of his government. Davidson had taken part in a controversy attended with notable consequences. Mr. Robert Montgomery, minister of Stirling, through the influence of Esme, Duke of Lennox, was appointed Archbishop of Glasgow. Resolved on the suppression of the episcopal order, the General Assembly charged Montgomery with corrupt doctrine and pastoral negligence. By Davidson's counsel, Montgomery agreed to submit himself, but he afterwards withdrew his promise, and was by the General Assembly of April, 1582, deposed from the ministry. On Saturday, the 9th June, Davidson was appointed by the Presbytery of Edinburgh to pronounce against him the sentence of excommunication. Davidson did so the day following in the church at Liberton, and the act was intimated by his brethren from their pulpits.
Montgomery was commanded to remain at Stirling, and not to aspire to the   Bishopric of Glasgow under the pain of the highest censures of the Kirk. This order he soon disobeyed, for, in the month of March following, he entered the Church of Glasgow with a band of the royal guard and ordered the officiating minister to come down from the pulpit. The minister, however, held his ground and it was only by the prompt intervention of the magistrates that a tumult was prevented.
But, a royal proclamation was immediately issued calling on the citizens to disregard the sentence which was posted on the Mercat Cross of Edinburgh; but it proved inefficacious, as Montgomery still had to leave the city under circumstances of disgrace. Consequently, Davidson experienced personal danger. The Duke of Lennox had publicly styled him “un petit diable”; (little devil) and apprehending the possibility of assault, Johne Davidson for the next ten successive Sundays was accompanied to the pulpit by an armed escort. Unable to inflict summary chastisement on the opponent of his protege, Lennox obtained a royal commission, empowering him to act as president of an assize for the trial of those concerned in Montgomery's degradation - mainly Johne Davidson. 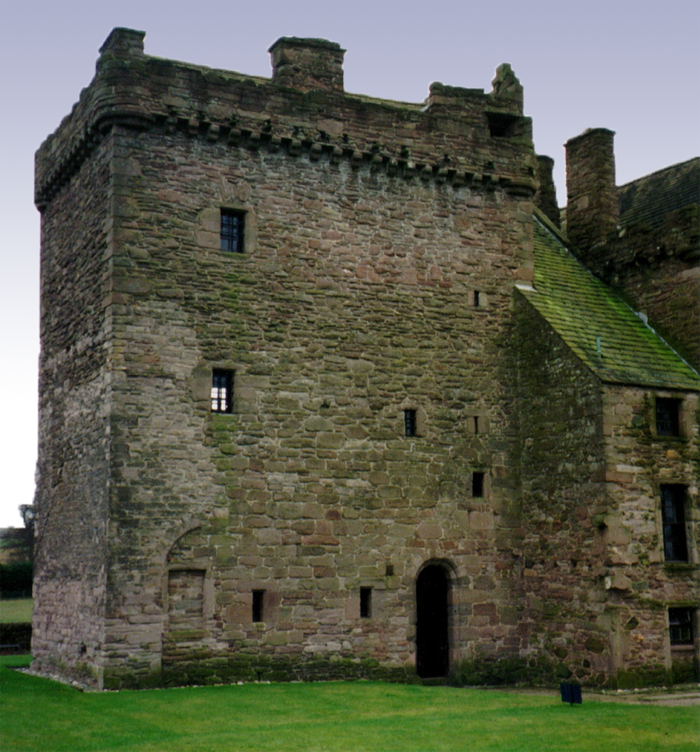 Ruthven Castle
The assize (court) was to sit at Edinburgh on the 27th of August, where Johne Davidson was to disclose the improper conduct of councillors to the king, but the Raid of Ruthven had effectually interposed.

The RUTHVEN RAID
Recent rulings and appointments given by James, particularly those overturning General Assembly proceedings, had the Presbyterians convinced that he was being managed under the influenced of Lennox and when Lennox had the Earl of Morton tried and beheaded on charges of treason, no more proof was needed.
William Ruthven, 1st Earl of Gowrie, was the head of Scotland’s militant Presbyterians.  particularly those overturning General Assembly proceedings, had the Presbyterians convinced he was being influenced by Lennox. Such was their fear of Duke of Lennox being so near to the King they decided to staged a coup.
In July 1582, the discontented lords made a bond to support each other in their enterprise to displace Catholic influences around the young king. Their party became known as the "Lords Enterprisers", their opponents were the King's favorite, the French Esmé Stewart, 1st Duke of Lennox, and James Stewart, the 4th Earl of Arran, who shared control of the government.
In August, Lennox and Arran held the Privy Council at Perth, and then they returned to Dalkeith Palace near Edinburgh. The Earls of Gowrie and Angus had invited young James to stay in Perthshire to be their guest on a hunting trip near the Ruthven Castle. James VI agreed and was then promptly “imprisoned” by the Lords of Enterprisers.
Leading the “Enterprisers” aka, Ruthven Raiders were the Earls of Mar and Gowrie, the Master of Glamis, the Laird of Easter-Wemyss, Lewis Bellenden, Lord Boyd, Lord Lindsay, the Abbot of Dunfermline, the Abbot of Dryburgh, the Abbot of Paisley, the Prior of Pittenween, and the Constable of Dundee.
The Ruthven Lords presented the King with a lengthy "supplication" explaining the motives of their surprise action, dated 23 August. ​
Johne Davidson, though not privy to the Ruthven plot, thought it best to make common cause with other Protestant lords, and along with some of his brethren, he hastily accompanied them to England, putting some distance between him and the King’s wrath. He made a journey to London, and there he became known at the English court, where Johne, true to his typical vehement oratory, he was designated by the English audiences "the thunderer."​