The Golden Gate International Exposition
​1939 and 1940

​San Francisco's Treasure Island, was a World's Fair celebrating, among other things, the city's two newly built bridges. The San Francisco–Oakland Bay Bridge opened in 1936 and the Golden Gate Bridge in 1937. The exposition opened from February 18, 1939, through October 29, 1939, and from May 25, 1940, through September 29, 1940.​
​
The theme of the exposition was "Pageant of the Pacific", as it showcased the goods of nations bordering the Pacific Ocean. The theme was physically symbolized by "The Tower of the Sun", by an 80-foot statue of Pacifica, goddess of the Pacific ocean created by Ralph Stackpole.
Timothy Ludwig Pflueger (September 26, 1892 – November 20, 1946) was a prominent architect, interior designer and architectural lighting designer in the San Francisco Bay Area in the first half of the 20th century. Together with James R. Miller, Pflueger designed some of the leading skyscrapers and movie theaters in San Francisco in the 1920s, and his works featured art by his personal friend Ralph Stackpole and challenging new artists such as Diego Rivera.

Pacifica was a statue created by Ralph Stackpole for the 1939–1940 Golden Gate International Exposition held on Treasure Island in the San Francisco Bay. Stackpole's largest sculpture, it towered 81 feet (25 m) over the entrance to the Cavalcade of the Golden West in the Court of Pacifica. The Court of Pacifica was dedicated to the heroic explorers of Pacific Ocean territories. Pacifica was the theme statue for the exposition, representing world peace, neighborliness, and the power of a unified Pacific coast.
It took Stackpole two years to complete the statue, it starting out as a three inch figure. Stackpole went through 50 renditions before settling upon the final model which was 10 feet (3.0 m) tall. The model was then divided into cross sections.
​
By November 1938, when Life photographer Alfred Eisenstaedt was capturing images to promote the event, Pacifica was ready for his camera. The magazine carried the image of this, Stackpole's most monumental work, "a peaceful, contemplative, almost prayer-like female figure"
Pacifica was physically the biggest and most conspicuous statue at the exposition.[6] She was placed in front of a 100-foot (30 m) metal prayer curtain that had a backdrop of stars made of metal and small tubes that would make sound when met with a breeze.[7] In front of the statue, in the center of the court, was a circular fountain surrounded by the works of eight different sculptors of figures representing people living on shores of the Pacific 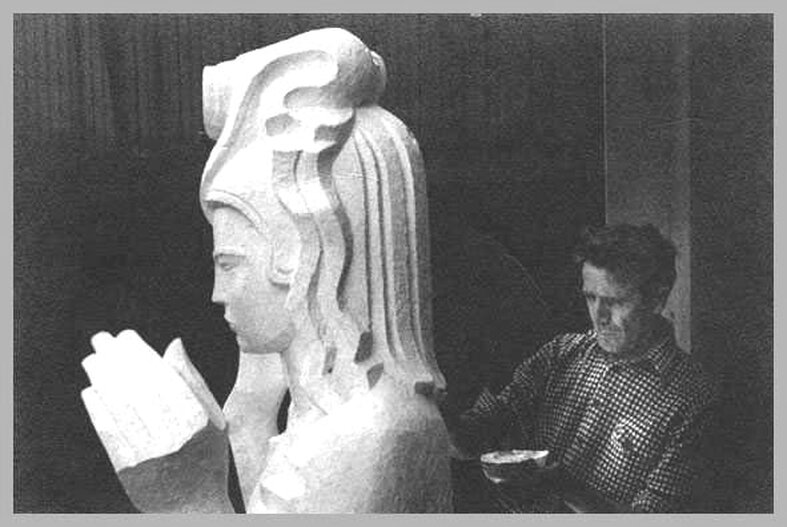 Timothy L. Pflueger, was also a member of the GGIE design committee, and came up with a plan to have an exhibition of artists on display. He contacted a wide array of artists to show their talents to the public while working within the "Fine Arts Palace", a concrete and steel industrial building measuring 335 by 78 feet intended to be an aircraft hangar after the Exposition closed. For the second time, Pflueger brought Rivera to San Francisco to paint a mural, this time as the main attraction at Art in Action.

Alfred Frankenstein of the New York Times reported from the opening day and wrote "Here the visitor is privileged to observe a kind of twenty-ring circus of art... On the floor, in a series of little ateliers, sculptors, painters, lithographers, etchers, ceramicists, weavers and whatnot are at work under the direct observation of the public."  On July 29, 1940, LIFE magazine ran a story about Art in Action using a spread of color photos.

Along one wall, Rivera painted the mural Pan American Unity on ten steel-framed panels spanning 74 feet in width and reaching 22 feet in height, weighing a total of 23 tons.

Some 68 artists had participated by the end of September when the Exposition was closed. Rivera was not finished, however; he and two assistants labored for two more months in the empty exhibit hall.
On Friday, November 30 and Sunday, December 2, 30,000–35,000 visitors came to Treasure Island to view the completed mural.  During the painting of the mural, Frida Kahlo had arrived in San Francisco and on December 8, 1940, Rivera's 54th birthday, Kahlo and Rivera were married for the second time in a civil ceremony at San Francisco City Hall. 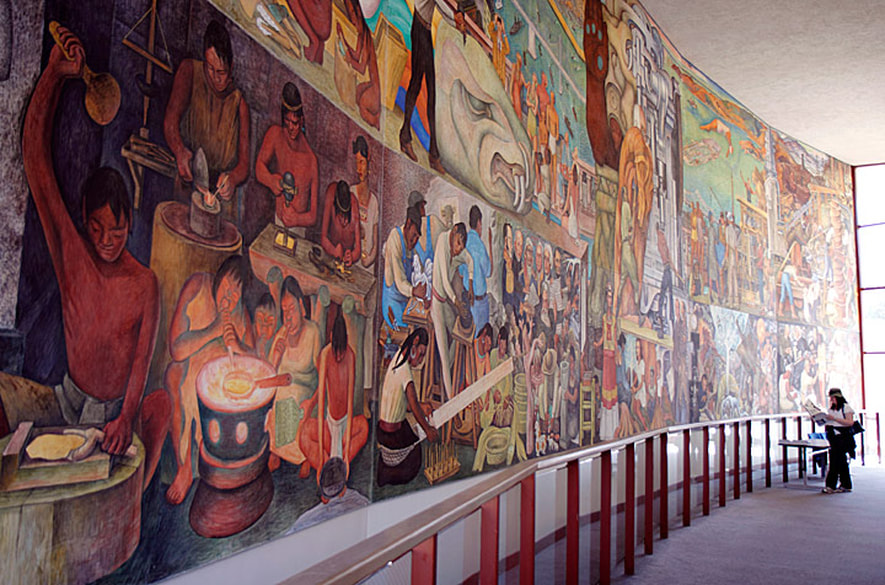