“Iron seemeth a simple metal, but in its nature are many mysteries. But, to the contrary the brawny blacksmith, long hair and all, embodies a very simple virtue, he owed money to no man, prayed in church on Sundays, and earned an honest living by the sweat of his honest brow.”  Anonymous - 18th Century

In the 1700's, women had limited rights regarding property and children.  Alexander Davidson III’s father died when he was only 4 years of age. William Sanderson Ellis (1705-1766), is Alexander’s uncle and oldest brother to his mother Sarah Ellis Davidson, he was appointed trustee and guardian to care for young Alex and his mother.  Mr. Ellis pays for Alexander, his two younger brothers, William and Phillip, and his mother's care until their mother Sarah died in 1752. William Ellis arranged for her burial to be near her husband. Alexander Davidson III is now 9 years old.
At a Court held for Spotsylvania County on Tuesday October the Third, 1756, William Ellis, Thomas Blassingham, and William Lewis acknowledged this their Bond in Court which is ordered to be Recorded, October 1752
“Know all men by these presents that we, William Ellis, Thomas Blassingham and William Lewis, are held and firmly bound to Richard Tutt, Benjamin Grymio, Robert Jackson, William Hunter, Fielding Lewis, and Charles Dick, Gent Justices of the Court of Spotsylvania County now sitting, in the sum of two hundred pounds Current money of Virginia to the payment whereof well and truly to be made to the said Justices and their Successors, we bind ourselves each of us our and each of our heirs Executors and Administrators Jointly and severally firmly by these Presents, sealed with our seals this third Day of October in the year of our Lord 1752 and in the XXVI: year of the Reign of our Sovereign lord King George the Second.”
The Condition of this Obligation is such that whereas the above bound WILLIAM ELLIS is appointed Guardian to ALEXANDER DAVIDSON Orphan of ALEXANDER DAVIDSON deceased if therefore the said William Ellis guardian aforesaid his heirs, Executors and Administrators shall well and truly pay or Cause to be paid to the said Orphan, all such Estate or Estates as now is Due or hereafter shall appear to be Due to the said orphan, when or as soon as the said Orphan shall attain to lawfull age, or when thereunto Required by the worshipful Justices aforementioned their heirs and Successors, as also save and keep harmless the said Justices their heirs and Successors from all troubles or Damages that shall or may arise about the said Estate or Estates, then this Obligation to be void and of no effect, otherwise to Stand, remain and be in full force power and virtue.
William Ellis (seal)
Sealed and Delivered) his In the Presence of Thomas B Blassingham, and William Lewis
Testimony W. WALLER Cl.Curt
William Ellis would pay and care for the young Alexander until he could become an apprentice. The descendants of Ellis and Davidson can be found prominently in both family trees.
​
William Ellis, knew there’s a future, a sustainable livelihood in Blacksmithing, and that’s exactly what he wanted for his elder nephew, a seemingly curious, perpetually restless and disconnected hard-headed, 12 year old boy.
Down through all recorded ages, civilizations man has valued gold as the most precious of metals. Yet in every civilization since man learned to smelt and forge it, iron has in fact been the metal most valuable to him. Blacksmiths were in high demand in Virginia, in every growing town and village and often was busy working from dawn to dusk, six days per week. In the remote, rural areas with smaller and dispersed population, many blacksmiths found it necessary to supplement their bartering with farming.
As an apprentice, the young Alexander Davidson, would work and live with a Master Blacksmith for an agreed-upon time. This agreement was arranged by William Ellis, who knew the man, trusted his oversight of the lad, and was also an acquaintance of the Blacksmith’s primary employer, a man named named William Bridges.
In exchange for the servitude of 7 years, room and board will be provided and a small stipend will be paid at the end of the apprenticeship. The Master Blacksmith would also see to it that Alexander will continue his schooling. At the end of the contracted time, Alexander Davidson, the apprentice would enter journeyman status, and be free to work at the trade wherever he chooses to go. 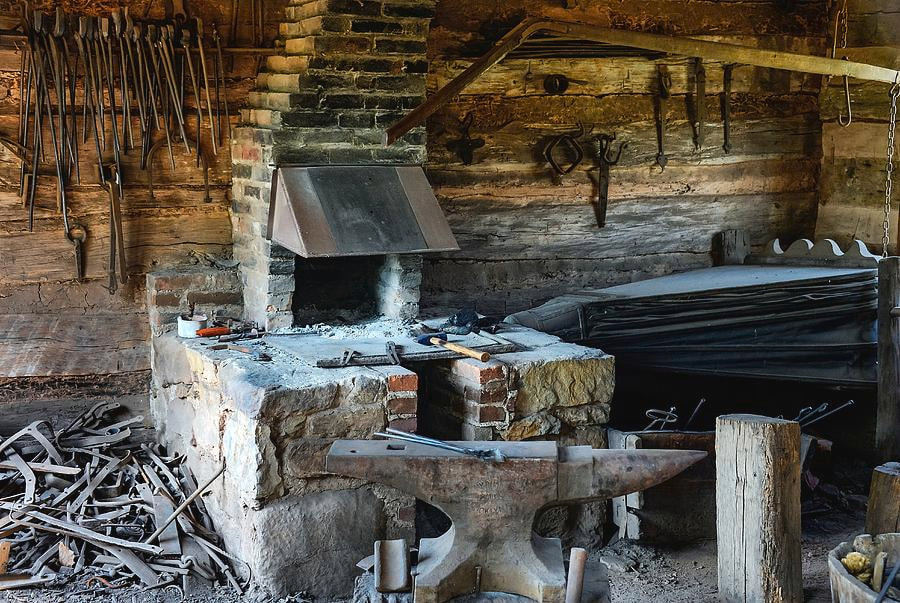 Restored 18th Century Blacksmith Shop
The Ellis and Bridges families had been establish in the Northern Neck of Virginia as some of the very first land owners. Court documents show an early presence of the Bridges men in the Northern Neck of Virginia in Westmoreland County, between the Potomac and Rappahannock Rivers, that can be traced back to Hercules Bridges and his two brothers Francis and Anthony, before the 1640s.
It was this Ellis and Bridges family history, sharing decades of family connections to bring this all about. William Ellis and William Bridges, work out an arrangement where young Alexander could become an apprentice to a Master Blacksmith that was employed by Bridges.

Virginia was well established for its iron works that produced pig iron and bar iron for exportation and cast iron articles for local consumption.  In 1750 however, the British government enacted the Iron Act which prohibited the erection of new steel furnaces, mills for slitting or rolling iron and plating forges with tilt hammers, meaning it attempted to prohibit blacksmiths in the colonies from producing finished iron goods. The Iron Act was part of a policy regulating Mercantilism in the colonies. Of course, the farther one can distance themselves from the larger cities and towns the less scrutiny there is and loyalty to the Crown rules or Parliament regulations.

The Scots-Irish were a close-knit community, and not very fond of the Crown, given their long-standing history, even more so, knowing their extended family members had fought and died on the fields of Culloden in ’46. Before that, during the Jacobite rising of 1715 the Clan Chattan remained loyal to the cause of a independent Scotland. Lachlan Mackintosh led eight hundred clansmen including Davidsons, in support of the rebellions. After some initial success, they were defeated at the Battle of Preston 1715. Many clansmen who were taken prisoners were transported to America including two uncles of Alexander Davidson II.
By 1770, Thomas Jefferson, listed eight iron works in Virginia alone. He claimed they produced about 4,400 tons of pig iron and more than 900 tons of bar iron annually.
A journeyman blacksmith could earned about 40-50 cents per day working in the larger city foundries.  Rural blacksmiths “Artificers” sometimes found it necessary to barter for their services in exchange for food, goods or other services where there were the scarcities of cash money and, even more simply, of towns.
As a rural, back country artificers, they would expand their value as a gunsmith, farrier, coppersmith, millwright, craftsman and they were often viewed as a necessary metal surgeon with his shop on the edge of civilization. Locals depended on him for repairing all their broken tools and farm implements. From iron nails, horseshoes, hooks, axes, bear traps, to tool repairs, such as hoes, saws, augers, and other metal parts needed on the frontier. The blacksmith was also, indelibly, a social actor. As a member of the trade community, the blacksmith provides a unique perspective from which to examine processes of technological adaptation. The need to patronize the blacksmith, minimally for repair services, was a regular occurrence within the frontier setting. The ways in which the blacksmith altered or adapted his techniques is exhibited through locally produced items and repaired goods. These items were then incorporated into daily practices and provide an illustration of the complex socialization of technological adaption and labor-as-practice. In short, the dynamics of the blacksmith place him as a specific social actor, who consumes products and produces products, colonizes and is colonized, and maintains daily life for the community and whose daily life is centered on the community.
William Ellis would have been the one who negotiated the terms for young Alexander Davidson’s apprenticeship. It was a legal contract between the apprentice and master craftsman, drawn up, signed before the courts, entered into a deed book, and was binding. As part of the contract, an apprentice agreed to keep trade secrets, obtain his master’s permission “by your leave” before ever leaving the premises or acting on their own authority. The apprentice also agrees to abstain from vices, from the “pits of intemperance, such as idleness, gaming, peevishness, quarrelling, fighting, horse-racing, lying, swearing, stealing and swindling”.

Most importantly, the apprentice agreed to work for the master without pay for the term of the contract. The contract also listed the obligations of the master craftsman to his apprentice.  As an apprentice, Alexander received his training, room and board in lieu of being paid, and if the master liked you, a small stipend might be paid at the end of the apprenticeship. It was the missus of the Blacksmith who would make sure Alexander worked on his schooling in the evenings to learn math, reading and writing. At the end of the contracted time, the apprentice would enter a journeyman status, now free to work in the trade wherever he pleased. Starting out many of the young Blacksmiths bartered their services in exchange for food, goods or other services.
​
At 19, Alexander Davidson III is a young man with a sustainable means of living. If the Master liked you he might provide a set of tools or new clothes on completion of the apprenticeship. It was during this time, that the young Alexander will catch the attention of William Bridges’ granddaughter, Anna Bridges. 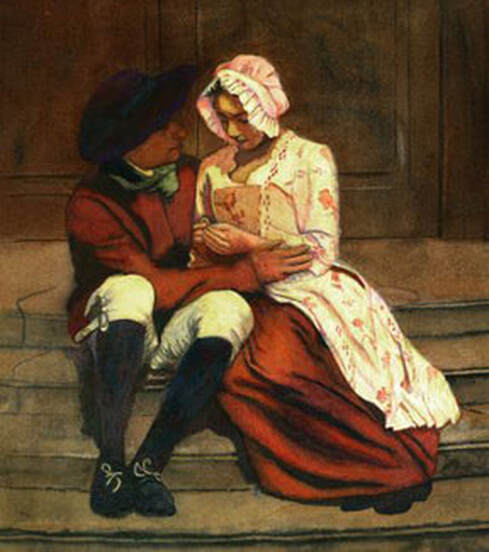