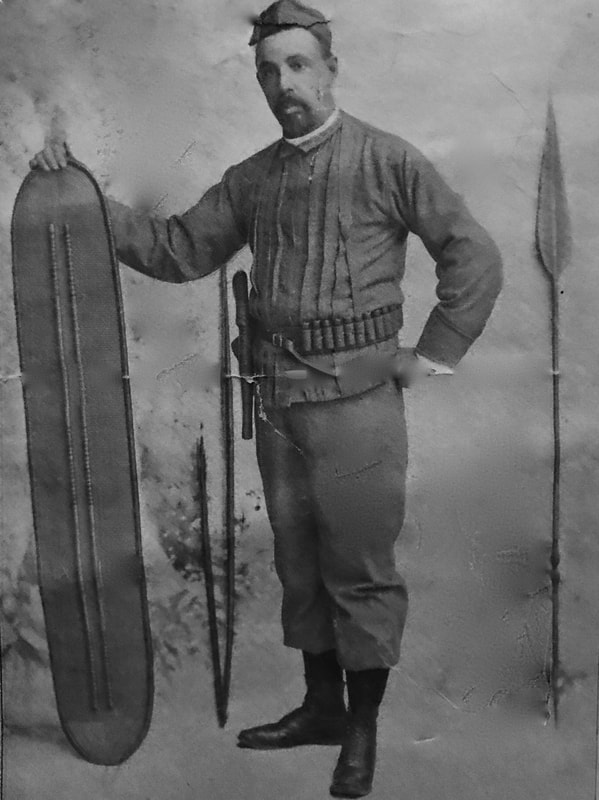 ​Mabelle Winifred Mathews wrote;
"My father William Mathews went to Africa in 1886.  He was employed to install an engine in the first steam boat ever launched on the Congo River above the Victorian Falls.  This he did and returned in 1888.
The Methodist Episcopal Church had stations in that region and needed the steam transportation.
Conditions were primitive in the deepest sense of the word. How he ever overcame thru alone is a mystery to me. My father was a man of great courage and determination. He had the physical strength and resistance of two men. This was evidenced by at least two tragic experiences"

Mabelle continues about her father William.
"While traveling in a large row boat with 8 natives, there the rapids of the boiling Congo as it was called, the boat capsized and all found themselves struggling among a river full of alligators (crocodiles) In some way Father got up onto the inverted boat and managed to balance there and maneuvered it to the shore and escaped after seeing his men taken down by the great monsters one after another, although all were powerful swimmers.
​​When he started for home he was 300 miles from the port where he could get a ship. He was very ill and not expected to live. But, against all advice to the contrary he determined to start maintaining that the motion of being carried in a hammock would help his condition. So with 8 carriers and a baby parrot he had caught for a gift for me, he started.
Do not know how long that trek through the jungle took him, but he did recover and he get home and live many years, but was always a victim of the dread African fever which attacked him at times. We had that parrot for 30 years.
Father was deaf and used a long black speaking tube which he wore around his neck. This saved his life numerous times. The natives being superstitious became alarmed when he took the black tube from around his neck and pointed the mouthpiece toward them. They thought it was the devil and they beat a hasty retreat.
Dr. David Livingston was found by a British Expedition headed by Henry M Stanley some years before my father went there, ... however he followed the course that Stanley took into the interior only not so far."

European exploration of the African continent was inevitably followed by penetration of traders and the establishment of Christian missions, if not always by formal imperial control and colonization.
Unfortunately, aggressive venturers, seeking personal, national, and religious advantage, were often at the forefront of new encounters with non-European peoples. Mixed in among those motivated by various ambitions for wealth, fame, honor, was the advancement of Christian spirituality, authority, and philanthropy.  Exploration, trade, and proselytizing often shaded onto each other, and were frequently entangled by the use of military force and the establishment of imperial rulers, like Leopold II, the King of the Belgians.
Leopold II, who ruled from 1865 to 1909 has often been described as worse than Adolf Hitler for his genocide against the people of the Congo Free State who he considered as his personal property including their lands and minerals. The area was handed over to him by 14 European nations at the Berlin Conference of 1884-1885 where Africa was shared among European colonists.​
While under the employment of King Leopold II, Stanley was known for his heartless butchery of unfortunate natives and had brought dishonor on the British flag and rendered the course of future travelers more perilous and difficult.​

Mabelle writes, "The suggestion as to a marriage to a native is utterly unfounded. Some of the missionaries have married the natives. One of these women he met was a very admirable character. The wife of a white man, she sent my mother an ivory tusk which had been used for generations in her family to grind corn. It was worn away at the grasping point by the thousands of hands that labored with it over the years. It must have been a precious possession which she sacrificed a friendly gesture."
​