Unfortunately, many of the South Carolina County census records rarely name the children, the majority only indicating if its a girl or boy under the age of 10.  Also, many birth records of young men in or around Charleston at the close of the Civil War were intentionally destroyed to keep their names from falling into the hands of Sherman’s approaching Union Army. In November 1863, Jefferson Davis had visited the city and declared it would better the city be reduced to "a heap of ruins" than surrender to the Union Army. The Union bombardment that began in late 1863, continued on and off for 587 days. Charleston finally surrenders only a month and a half before the war head ended.

James Jordan married Mary Louisa Fidler, 2 FEB 1857, in the town of Galice, Oregon. Mary was the daughter of daughter of Dr. George Fidler and Jane Strain. Mary was born 10-4-1840 in Crawfordville, Indiana.  Mary died at her son’s home of Edward Jordan, 4-9-1924 in Wolf Creek, Oregon.  My father, James Davidson Jordan (named after his grandfather) was born in Wolf Creek in 1920.

DR. GEORGE FIDLER, b. 1812 New York, practiced medicine in Kentucky until the California Gold Rush brought him out West around 1850. With his California earnings he bought a farm in Oregon, returned to Iowa to bring his family out West in 1853. For the next 20 years George served intermittently as a doctor in central and southern Oregon, but never could shake the Gold Fever. While mining in Nevada he wrote a letter to his son in 1876 noting that he was on the eve of starting an exploration expedition to Africa. From this expedition Dr. Fidler never returned, his fate remains a mystery to this day.

James Jordan
Family stories that have been handed down, tell us that when James Jordan was 10 yrs. old, when he left home, stowed away on a merchant ship where he was befriended by a sailor. Reason for his leaving we do not know, kidnapped or a runaway, but evidently he was worked as a cabin boy, becoming a sailor over the course of the next 7+ years. There is some speculation that he might have had join the service of the Navy (but there are no records of this) It was during the frenzy of the California Gold Rush that he jumped ship in San Francisco in 1850.
There in San Francisco he worked a dray, hauling supplies to and from the docks (a low, heavy cart without sides, used for hauling).  Within a year, he heard of Gold discoveries in southern Oregon, near Jacksonville.

The Stories of Oregon Gold
"We camped on the north side of the Illinois River and crossed to the south side where we went down river until we came to a small stream, which was afterward named Josephine Creek, after a daughter of a prospector who came in that same summer of 1850. Josephine Creek was found to be very rich, paying on to two ounces per day. Luther Hasbrouck washed the first pan of dirt on this creek and it averaged 50 cents to the pan. He washed 16 pans. This was in July of 1850 and this was the first discovery of gold in Josephine County.
The Illinois Valley Indians at that time being troublesome, it was necessary to build a fort for protection, and consequently a fort was built of logs on Josephine Creek and called Fort Gidney. It was so named after one of the miners in the group, Nat Giles, whose nickname was Gidney. As soon as the fort was completed, it was necessary to go out for provisions.  It was agreed that lots should be drawn to see who should make the trip.  It fell to the lots of Luther Hasbrouck, Mose Dusenberry, Henry Lawrence and Captain Jennings.  They went north until they found a trail from Oregon to California, which they followed to Shasta City. There they purchased supplies and returned in twenty-one days.  The party supposed they had independent ‘diggings’ on Josephine Creek, but on their return, they found a mining town of tents.  Probably 2000 people were in Illinois Valley, The prospectors had been followed to their new camp and as soon as the discovery had been made, news was sent to California of the new Eldorado. This caused a great rush to Oregon and for this time on, Southern Oregon was alive with busy placer miners" 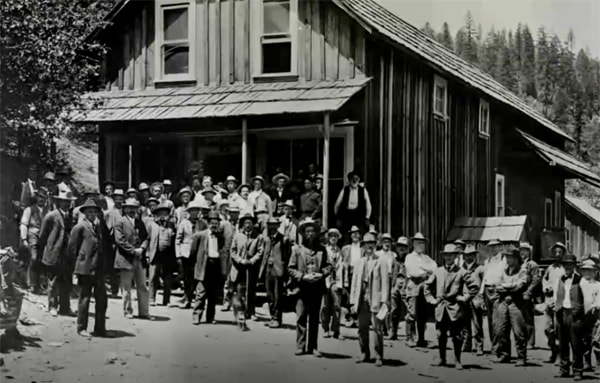 James and Mary were married in Galice, Oregon
OREGON GOLD DISCOVERY
​The mines in Galice were booming and thousands were flocking to Galice, Oregon to find their fortunes.  It was here that James Jordan now 20, met 16 year old Mary Louisa Fidler. Dr. Fidler, Mary's fahter, took a liking to this adventurous young man and approved the marriage.  The newly-weds lived in the Fidler home for one year.

Shortly before 1860, the Jordans moved to Whisky Gulch near Williamsburg (aka, Williams Creek) and here they built a two story log cabin and homestead on the East Fork of Williams Creek where ten children were born. Wild life was plentiful for meat and the kids took advantage of the wild berries when in season. Doing a little mining, working for others and using the barter system, James and Mary were able to care for the family. Mary was only 4 feet 9 inches tall, but being a hardy women she was a real help to her husband. Together they built fences around the land they cleared. When the Storch Sawmill was completed next to their property, they had lumber to build a large barn, a grain silo and chicken coops. They raised wheat and hay. It was necessary to have a large barn to protect the animals at night from predators. Bears, cougars and coyotes constantly roam the area. Chickens ran about during the day, but a chicken house was necessary at night to protect them from the varmits that can come around at night. Weasels were a real threat, being long and thin, they would slide up to the chickens and suddenly grab them by the neck and suck the blood out of them. Roosting in trees was little protection. Nests were built up high enough to protect the eggs from snakes and rodents. Food was stored in the cellar under the house, cool during the summer protected from freezing in the winters.

James Jordan had a tattoo on his arm from his seafaring days, which he would show his grandchildren only for a second at a time. Mary Louisa Jordan, was a little woman but hardy, outlived her husband by many years, was well-known for her independence and spunk.
James and Mary Jordan had a daughter named Alice, their first born. Alice married Wheeler J. Rogers, also known by his boyhood name as Ben. Ben Rogers he came to Grants Pass, Oregon from Missouri. Known for his great charm and personality, he reportedly also arrived with a lot of money, and boarded at the Jordan’s Grants Pass Hotel.
Ben Rogers was a friend and life-long correspondent of Samuel L. Clemens (Mark Twain) and was the same boy whom generations of readers would have known as Ben Rogers. Ben Rogers, the high-spirited, hop-skip and jumper, the imitator of a tooting Mississippi River steamboat who was on his way to a swimming hole when his was finagled by Tom Sawyer into whitewashing a section of fence that Tom was supposed to be painting himself, and what’s more Ben gladly paid Tom for the privilege to do it! It turns out that Wheeler “Ben” Rogers was also a nephew of Henry Huddleston Rogers, the Standard Oil magnate, whom Samuel Clemens called a loyal friend and financial supporter.
James and Mary Jordan’s 2nd eldest daughter was named Ethel. Ethel Jordan married Fremont Stackpole and they have a son named Ralph (b. May 1, 1885 – d. December 13, 1973). Ralph was an enterprising youth and decided he was going to take a bicycle trip to Arizona. He never made it to Arizona. Ralph stepped into a different world when he left Oregon for San Francisco. Ralph enrolled in  an SF. art school in 1903, and would earn fame as sculptor. While in school, his first girlfriend was Helen Arnstein Salz who goes on to earn fame as a NY abstract artist. Ralph and Helen both go New York where they studied under Robert Henri. Following the SF earthquake and fire Ralph traveled to Paris in 1906, to attend the École des Beaux-Arts and Atelier Merces in 1906–1908, exhibiting at the Salon in 1910. While there, he meet a young couple named Diego Rivera and Frida Kahalo. Ralph befriended Diego and Freda Rivera the famous muralist and artist, and eventually convinced them both visit and stay him in San Francisco in 1930.

James had built a productive farm and sold produce in Grants Pass.  As the children grew they sold the family farm and moved to Grants Pass, where the children can get a better education. The farm was sold to Fremont Stackpole the same year he married Jim and Mary's daughter, Ethel. In 1885, James purchased two lots in Grant Pass and built the Commercial Hotel.
​
James and Mary also purchased 280 acres north of Grants Pass on Monumant Drive for $2,500. This would be their last home. James was a heavy smoker and his health declined. He died April 1st, 1897 and was buried in Pleasant Valley Cemetery, close to his home.
Mary was a very independent and spunky little lady and continued to live in the home for many years. She made in own soap and baked her own bread in an outdoor brick oven. She was known for growing strawberries and beautiful roses. She had a reputation as a very neat person, she could wear a white dress all week and never get it dirty. Many of her grandchildren came to live with her at different times as they did not like to see her alone. She died in Wolf Creek at the home of her son Edward on April 9th, 1924, not long after her youngest son Roy was killed by accidental electrocution as a lineman for the power company in Klamath Falls. She was buried beside her son Roy, in Granite Hill Cemetery. 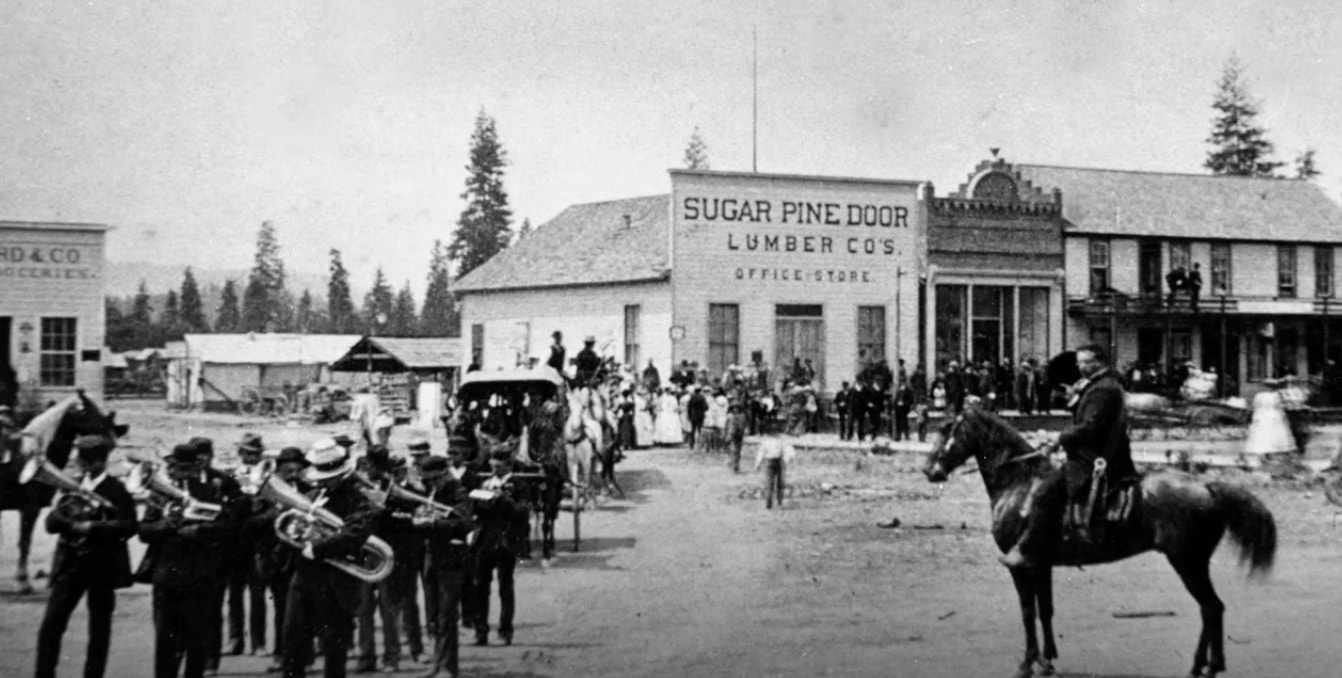 The 2-story Building on the far right is the Commercial Hotel,
​built and owned by James Jordan c. 1885