The English had long dreamed of colonizing America, especially after Sir Francis Drake brought home Spanish treasure and dramatic tales from his raids in the Caribbean. Ambitions of finding gold and planting a New World colony seemed within reach when in 1606 Thomas Smythe extended overseas trade with the launch of the Virginia Company. But from the beginning the American enterprise was a disaster. Within two years, warfare with Indians and dissent among the settlers threatened to destroy Smythe’s Jamestown just as it had Raleigh’s Roanoke a generation earlier.
To rescue the doomed colonists and restore order, the company chose a new leader, Thomas Gates. Nine ships left Plymouth in the summer of 1609—the largest fleet bound for the New World England had ever assembled—and it sailed into the teeth of a storm so violent that “it beat all light from Heaven.” The inspiration for Shakespeare’s The Tempest, the hurricane that separated the flagship from the fleet, and eventually driving it onto reefs off the coast of Bermuda—was in fact, a lucky shipwreck (all hands survived) which proved the turning point in the colony’s fortune.

​​When the hundred or so English settlers sailed into the Chesapeake Bay a year earlier, in the spring of 1607, they unknowingly were about to encounter one of the most powerful Indian chiefdoms on the Atlantic seaboard. Powhatan, the paramount chief, or mamanatowick, ruled twenty-eight to thirty-two Algonquian-speaking groups that resided from north of the Rappahannock River to south of the James and west to the fall line. The Indians called their land Tsenacomoco and were very capable of defending it.

The Powhatan men "are soon moved to anger," Captain John Smith would later observe, "and so militious that they seldome forget an injury." As such, they often fought to avenge slights and earn increased personal status, creating a cycle of retribution that often blurred the line between war and peace.
The new settlers had arrived near the beginning of a devastating seven-year drought (1606–1612)—the driest stretch in 770 years—that was accompanied by particularly fierce winters. Food, especially corn, was at a premium, and the colonists had come to Virginia unprepared. Supplies from England had not been adequate to keep them alive. As the English quickly died of malnutrition and disease during those first two years, it was gifts of food from the Indians that saved the colony. But the drought continued and Smith supplemented those gifts by aggressively bargaining for, and often outright stealing, corn. When Powhatan halted trade, he created a serious crisis for the Jamestown settlers.

Unable to adequately provide for themselves, the settlers pressured the Indians of Tsenacomoco for relief, which led to a series of conflicts along the James River that intensified in the autumn of 1609. As the conflicts continued, unfathomable atrocities we’re committed by both sides.
A young English colonist named Henry Spelman was just fourteen years old, when he was sent to live first with Powhatan's son Parahunt (referred to as "littel Powhatan") Spelman later lived with Powhatan himself. In November, young Spelman traveled to Jamestown with an invitation from Powhatan for the English to visit his new capital at Orapax. Instead of finding corn for trade, however, the colonists, led by Captain John Ratcliffe, walked into an ambush; about thirty-three men, or two-thirds of their number, were killed. The Indians captured Ratcliffe, and their women skinned him alive using mussel shells. (Spelman was horrified by what had happened and fled Powhatan to live among the Patawomecks
Powhatan ordered attacks on the English settlers, which lasted through the winter of 1609–1610 and precipitated the so-called Starving Time. This was the Indians' best chance to drive off the English, but the English survived with the arrival of reinforcements.
Using terror tactics borrowed from their conquest of Ireland, English soldiers exacted their revenge by burning villages and towns and executed women and children. Eventually they defeated the Nansemonds and Kecoughtans at the mouth of the James and the Appamattucks near the falls. As the colonists noticed, the Indians quickly learned not to "approche scarce within musket shotte," while the colonists learned to fear ambush from the tall grass and "dyvers arrowes at randome."
As the First Anglo-Powhatan War escalated, few restraints were in evidence, and descriptions by the colonists of the Powhatans' calling on their god Okee suggest that both sides may have seen themselves in a holy war. In November 1610, De La Warr sent a large expedition of perhaps two hundred men, including miners, west toward the falls of the James. After an initial defeat at the hands of the Appamattucks' Weroansqua, or female chief, Opossunoquonuske, the colonists destroyed the Appamattuck village and severely injured the Weroansqua.
Two years later, Captain Samuel Argall captured Powhatan's daughter Pocahontas in the spring of 1613 and turned his prisoner into the leverage necessary to make peace.

Beginning in 1618, a faction within the London Virginia Company led by the treasurer Sir Edwin Sandys had steered the company in the direction of integration of Indians into English settlements. Participating families received houses in the settlements and funds were established for a school for Indian youth for Christian conversions and hopefully, civilize them.
They assumed that Openchancanough and the Powhatan nation shared the ideal of an integrated society. Their silence in the face of daily insults of occupation and verbal abuse the English mistook for subservience. Not only had the Indians not agreed to cultural suicide, but as George Thorpe, a supporter of the new policy of integration, observed, most of the English settlers still harbored their contempt for Indians.
It was apparent to the Indians that the colonists’ expansion was threatening the Indian way of life.  Opechancanough spent the next three years looking for just the right opportunity to drive them off their land. The attack would come in 1622, despite maintaining overall friendly relations with the English.
According to English accounts, Opechancanough planned to overrun the Jamestown fort as well as the outlying settlements, killing everyone in their path. But a young Indian boy who had been “Christianized” by the settlers forewarned the inhabitants. The news did not spread fast enough, however, to save those living in the all the outlying settlements.

On the day prior to the attack, the Indians came bringing gifts of meats and fruits and shared them with the settlers, thereby disguising their true intentions.
The English had grown more content with the increase of new arrivals from home and the long quiet they had enjoyed among the Indians since the marriage of Pocahontas. The men were lulled into a fatal security and became ever familiar with the Indians - eating, drinking, and sleeping amongst them, by which means the Indians became perfectly acquainted with all of the English strength and the use of our arms, knowing at all times when and where the settlers’ habits, whether at home or in the woods, in groups or dispersed, and their conditions of defense or indefensible.

On the morning of March 22, 1622, the Indians who had visited the colonists and stayed overnight joined others who just arrived and entered the James River settlements, some using boats to cross rivers, to launch well-coordinated surprise attacks. The Indians entered the settlements unarmed and when the time came to attack they used the colonists’ own tools and weapons to kill the English.
Colonist Edward Waterhouse recounted that the Powhatan were “so sudden in their cruel execution that few or none discerned the weapon or blow that brought them to their destruction. The very morning of the massacre they came freely, eating with them and behaving themselves with the same freedom and friendship as formerly till the very minute they were to put their plot in execution. Then they fell to their work all at once everywhere, knocking the English unawares on the head, some with their hatchets, which they call tomahawks, others with the hoes and axes of the English themselves, shooting at those who escaped the reach of their hands, sparing neither age nor sex but destroying man, woman, and child according to their cruel way of leaving none behind to bear resentment.”

The Indians killed families in the plantation houses and them moved on to kill servants and workers in the fields. The Powhatans killed 347 settlers in all - men, women, and children. Not even George Thorpe, well known for his friendly stance towards the Indians, was spared. The Powhatans harsh treatment of the bodies of their victims was symbolic of their contempt for their opponents. The Indians also burned most of the outlying plantations, destroying the livestock and crops.
​
Meanwhile, Samuel Jordan had received a warning prior to the attack, and was able to fortify his compound at Beggar’s Bush that already had a 10 ft. stockade fence encircling 11 buildings. When the Indians attacked he and his men were ready to a great surprise to the Indians, who gave up their futile efforts and beat a hasty retreat. Hearing of the coming attack he sent his oldest son Richard by boat across the river to warn those at the Martin Plantation. Unfortunately, Richard arrived just minutes before the Indians attacked, he was killed at the plantation along with the others..
In the aftermath, the surviving colonists in Jamestown were in an uproar, stunned by the massacre. The settlers immediately withdrew to the fort and to other easily defensible locations. In addition to the loss of life, the colonists also lost valuable crops and supplies necessary to survive the winter.
Ironically, during the end of that same year, during the winter of 1622-23 the colonists were forced to trade with the Indians for corn and supplies and even with these provisions many went hungry. The mortality rate during the winter of 1622-23 climbed due to malnutrition and disease - over four hundred settlers died.

Unfortunately, Samuel Jordan and John Rolfe both died within a year of each other,  John supposedly died during the Indian massacre of 1622,  Samuel succumb to a spreading sickness and die in the spring of 1623. 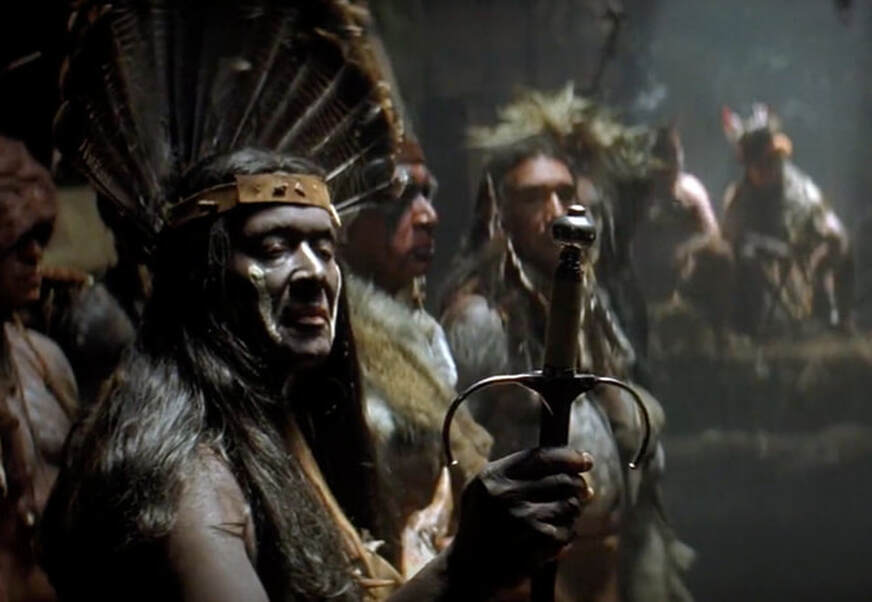