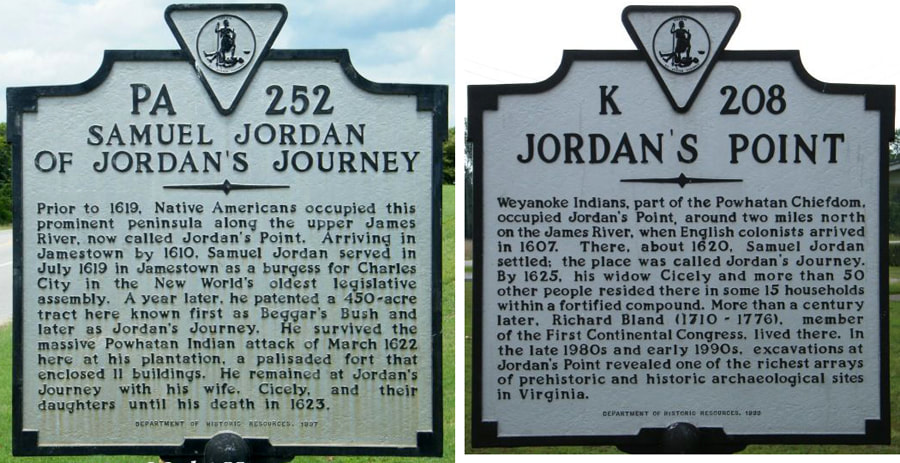 In America, begining with the very first decades of the 1600's, land grants were given for the purpose of establishing settlements, missions, and farms.  England started with a 'headright system', used both by the Virginia Company of London and the Plymouth Colony, but later used primarily in colonies south of Maryland.  Under this system, emigrants or those paying for their passage would receive land if they could survived for a certain period of time - many indentured servants did not survive their contracts. The enslaved Africans were not eligible in most of the headright systems, although certain freedman of color could acquire land.
As English colonial law developed, headrights became patents and a patentee was required to improve the land. Under this doctrine of planting and seeding, the patentee was expected to cultivate 1-acre of land and build a small house on the property, otherwise the patent would revert to the local government.

The Frontier’s Impact on America History 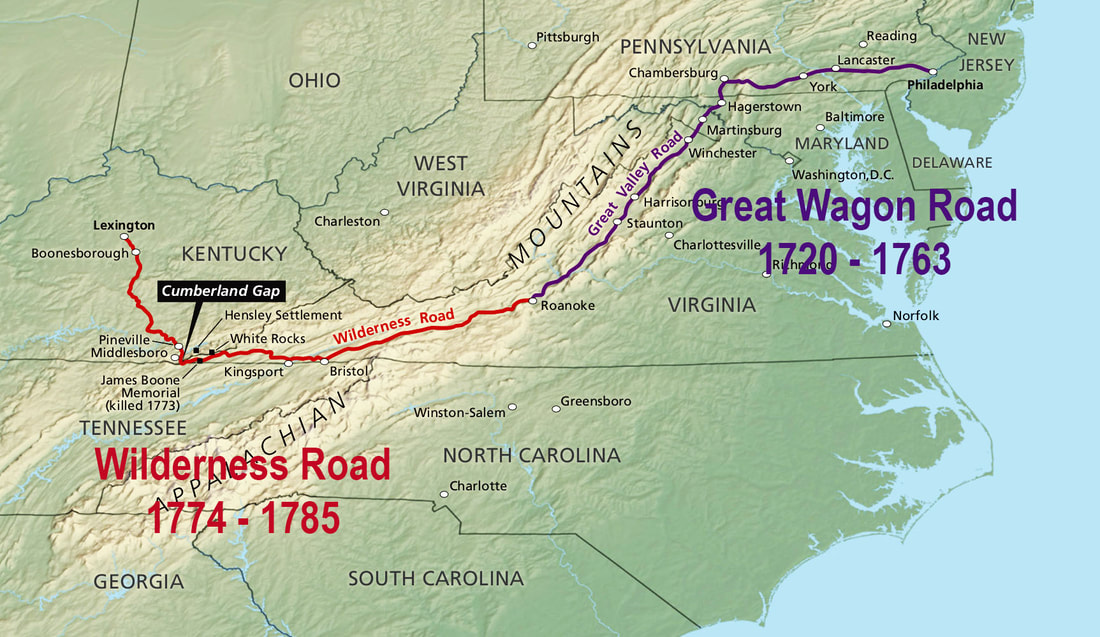 Alexander Davidson II migrated 1767 from Gloucester Co., Virginia to Guilford, Orange Co,N.C.  then onto Tyron County  (later Rutherford Co.)  N.C..
In 1796, he moves his family through the Cumberland Gap settling down in Glasgow, Kentucky.
The American character was shaped by the vast frontier experience and abundance of unlimited resources, Americans were nurtured, educated and molded by the promises that the open frontier offered.  As long as there was ample available land, there was unlimited opportunity. However, the experience of being out in the frontier was not easy, often a single family maybe isolated until a small community could take root. It was their rugged determination and self-reliance that became a defining American characteristic. As these frontiersmen pushed westward, Americans became more and more separated from their ancestors’ European way of life.
The Blue Ridge Mountains was primarily the fall line – a narrow zone that marks the geological boundary between an upland region and the Piedmont region, distinguished by the occurrence of falls and rapids.​ The Blue Ridge Mountains marked the frontier towards the latter end of the 17th century, circa, 1650 to 1699.
English settlers slowly migrated through the Appalachians and into the Alleghenies beginning of the 1700s and through the American Revolution.  Future President Thomas Jefferson crafted the Ordinance of 1784 which carved out ten prospective states west of the Appalachian Mountains and established the foundation for the Public Land Survey System.

Government Land Grants
Starting with the American Revolutionary War, United States veterans often received land grants instead of backpay or other remuneration. Bounty-land warrants, often for 160 acres, were issued to United States military veterans from 1775 to 1855, thus including veterans of the American Revolutionary War, War of 1812 and the Mexican–American War as well as various Indian wars. 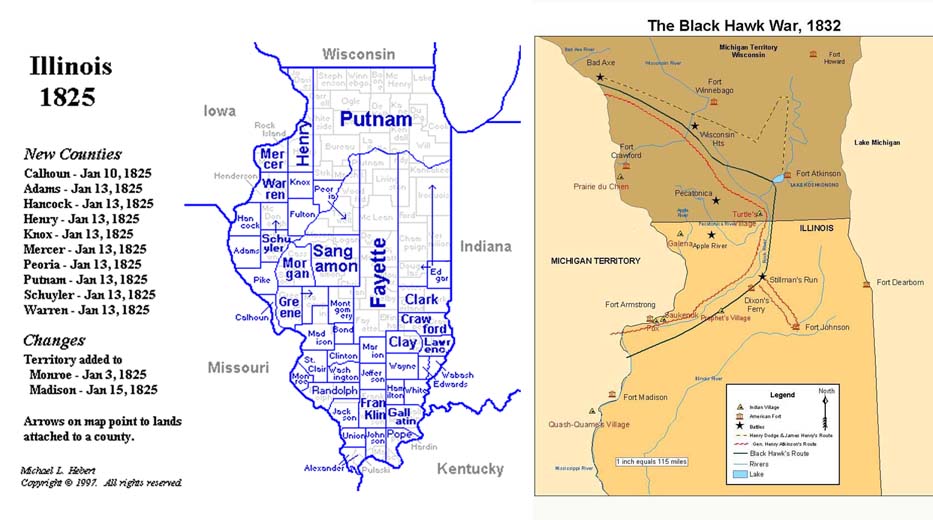 1825 - Elijah Davidson moves into western Illinois Schuyler Co., with land grants awarded from Battle of 1815 - New Orleans
The American migration had reached the Mississippi River by the first quarter of the 19th century - 1800 - 1825; and the Missouri River in less than thirty years later, and then to the belt of the Rocky Mountains and the arid tract of the western part of the Great Plains east of the Rocky Mountains, a region that is mostly semi-arid grassland and steppe, often referred to as the High Plains, by mid-century. Within the 1840s we see the beginning of an earnest push to the west coast, with the 1849 Gold Rush of Callifornia becoming the tipping point. 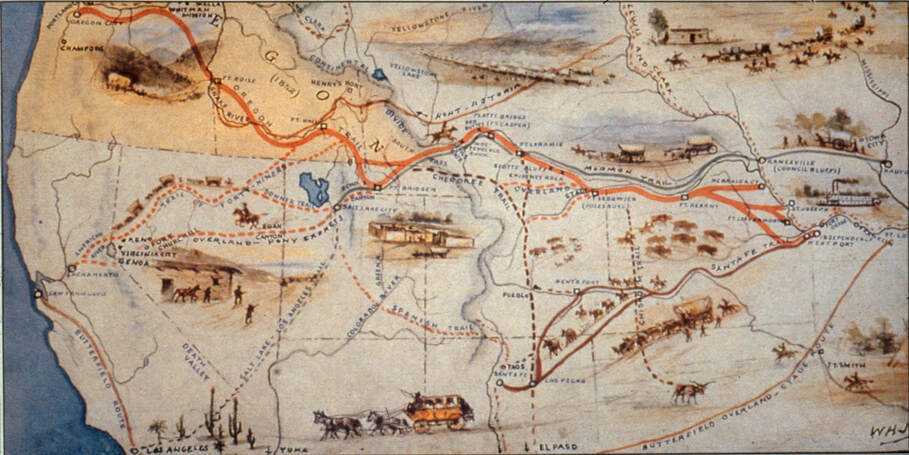 With each new generation of traders, farmers, cattlemen, miners and city builders, brought a  successive wave claiming as much of the land for themselves as they could, until at last, by the 1890's the majority of uncharted frontier had finally disappeared.
The ever changing frontier shaped the American social and economic character and molded our historical, social, and economic development. The "American character" enshrined in endless literature and folklore, was coarse and strong, but inquisitive -- intelligent in a practical, common sense way, but not always book-learned. It was individualistic and freedom-loving. It could be violent, fighting for what one believed in -- and what one claimed as its own. All these characteristics were born in that frontier existence and molded by this uniquely American experience.

One of the most important factors was the fact that free land had continually laid on the western borders of the United States. Whenever social conditions tended to crystallize in the East, whenever capitalism tended to press on labor, or political restraints impede the freedom of the masses, there was a gateway of escape to the freer conditions of the frontier. These free lands encouraged individualism, economic equality, freedom to rise, democracy. Men with ambition and determination would not accept inferior wages and a permanent position of social subordination when this promised land of freedom and equality was theirs for the taking. Men and women, who could not rest content under oppressive legislative conditions when by a determined effort he or she might reach a land wherein to become cohabitants, and coworkers in the building of free towns and cities, eventually becoming free states on the boundaries of his or her own ideals.  In a word, the free lands meant free opportunities. Their existence has differentiated the American democracy from the democracies which have preceded it. As democracy in the East took the form of highly specialized and complicated industrial society, in the West, it kept in touch with primitive conditions, and by action and reaction these two forces have shaped our history. 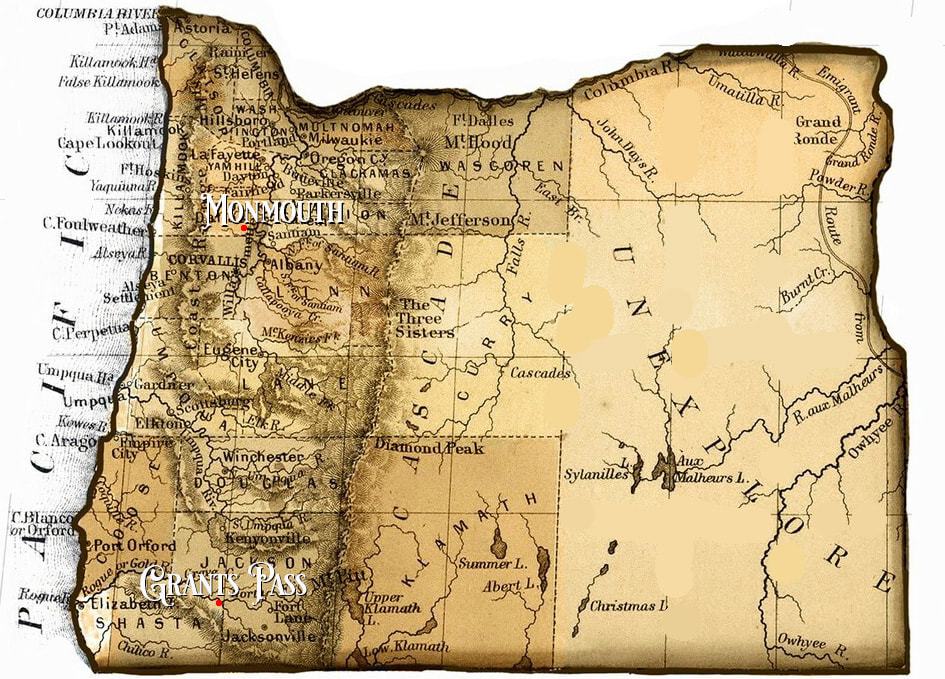 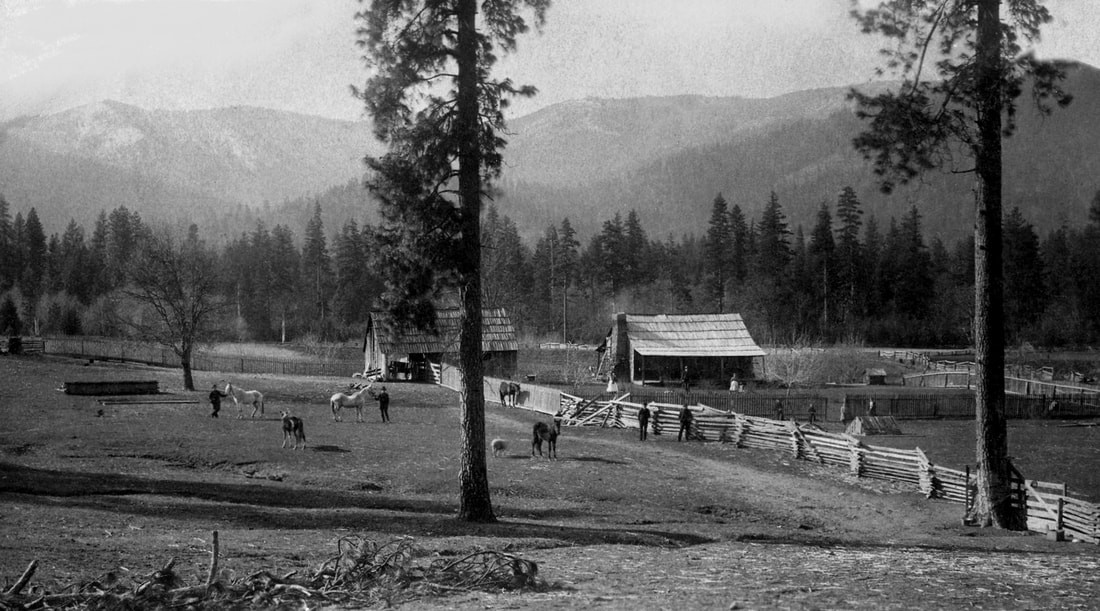 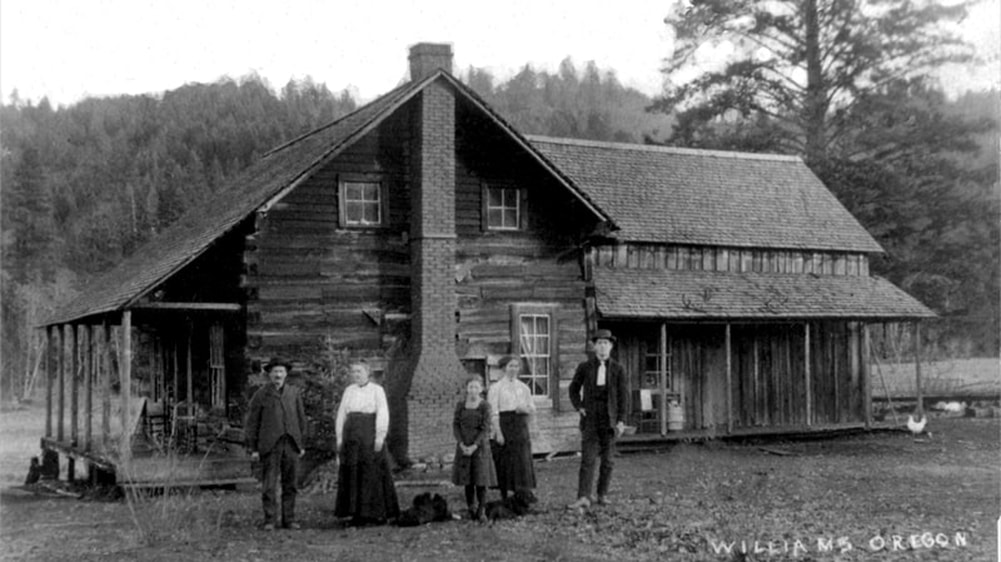 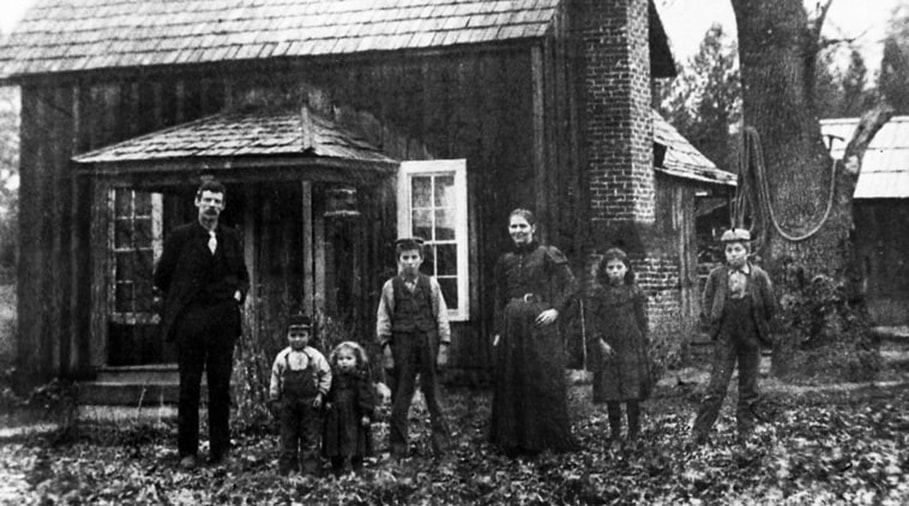 Carter Davidson Homestead circa 1890 Williams, Oregon
1890s
Available land had been the key to the economic growth of this country, and hence responsible for changing people's cultural traits. At the end of the 19th century, the frontier was disappearing, and thus ended a significant chapter in the history of this nation and of the world.
As a result of the closing, several significant changes occurred. The availability of free land was basically exhausted, land grants in the Great West diminished as a factor in American development. Free land had always acted as an economic safety valve, providing all with a chance to get a living. Free land also meant better wages back east, because employers had to induce their workers not to seek better opportunities in the West. Positions and wages being taked by new waves of immigrants coming to the indusrial northern cities from Ireland, Italy and eastern Europe.
At the closing of the frontier, we entered a period of concentration -- of capital, as with monopolies and trusts -- and of labor, responding with unions and cooperation. Connected with these changes was an impetus for expansion beyond the continental limits of the United States -- an expansion that was both political and financial. America embarked on a new journey, a global political frontier expanded by capitalism making with them that frontier spirit of individualism and democratic idealism.

A Brave New World
The frontier experience that was so central to the American history had come to a close. The center of gravity of the American Spirit had shifted. For many, the end-times had arrived, the 1890s was a difficult decade, filled with angry anti-government rhetoric.
Either way, it all sounds very familiar today. Americans felt they were up against the end of their history as they had known it and were on the edge of something different.

James Jordan's Hotel is on the far right with balcony
End of the line. End of an Era. Southern Oregon 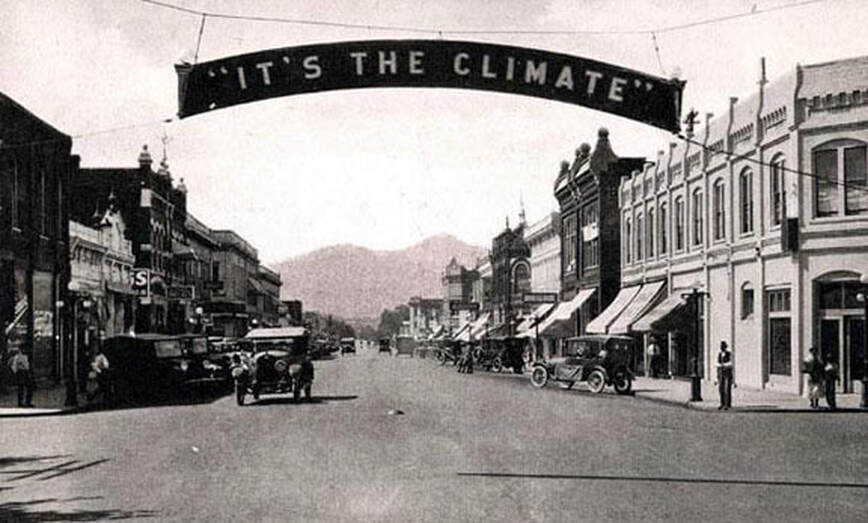 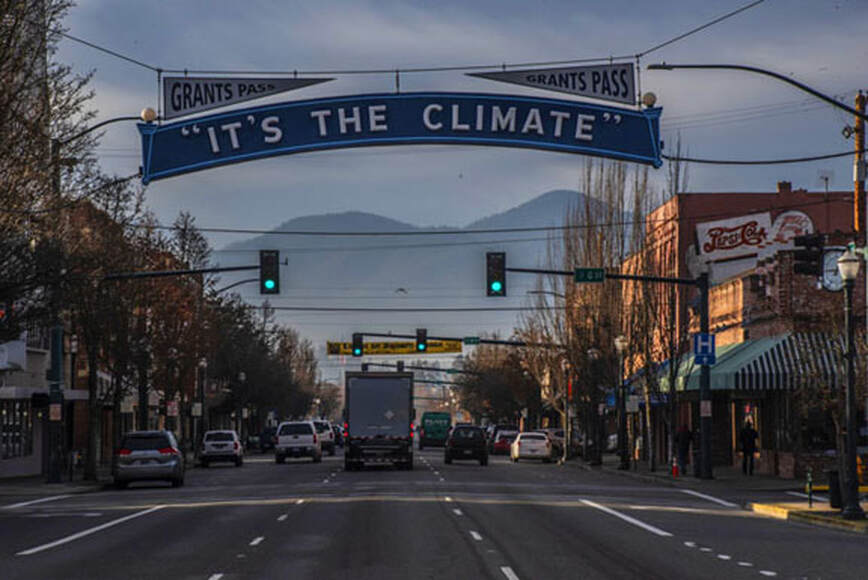